Guild Wars 2 features a large PvP element, but is VG247's resident MMO rookie Dave Cook skilled enough to take part and succeed? Check out the final part of his journal to find out.

Playing MMOs was way down my priority list just three weeks ago, not because I had any wild presumptions about them, but just because it's something I simply hadn't dabbled in. That and the social features put me off little. I never wanted to be halfway through my dinner, only to get a text or email asking me to log-on because my guild needed me. That's too much like work.

If you missed parts one and two of my Guild Wars 2 journal, you can catch up here:

But I took the plunge with Guild Wars 2 and found that I had been worrying about nothing. I really like it, and I've invested a lot of time into levelling up, exploring the game's mechanics and social aspects. I'm sold on the idea, and I may just try Final Fantasy XIV: A Realm Reborn once that launches, but we'll see.

So what else did I have to sample? Well, Guild Wars 2 delivers a large PvP offering and although I had heard of many players now hitting the 80-level cap, I didn't let that put me of. I knew I was in for a beating, but in the spirit of open-mindedness I took the fight to the competitive arena.

Before jumping into PvP, I told myself, 'OK, chances are you will be horribly under-equipped to fight on a level playing field with others online. But hey, you're level 20 now so you should be able to throw down a little.'

What I didn't realise at the time is that your PvE and PvP levels are separate, so imagine my dismay as I logged on to the PvP tutorial area to find that I started back at level one again. But that said there really isn't that much to Guild Wars 2's competitive matches, and I mean that in a positive sense.

I thought matches would be as intricate and mind-melting as a match of DotA 2. When I was at gamescom last year I sat in on a match of Valve's DotA 2 tournament, The International. I sat there waiting for an interview with Gabe Newell while watching a big screen as hundreds of kids around me screamed in excitement.

Honestly, I must have looked like a right dick sitting there absolutely puzzled at what I was watching. I had no idea who was winning, what they were doing, or what tactical moves both players were employing. That's what I've always thought of MMO PvP, and just thinking about it used to make my brain itch.

Guild Wars 2 still has that tactical edge, but it doesn't smother you with battle mechanics so deep that only IBM super computers can figure them out. The tutorial zone really helps with that too. 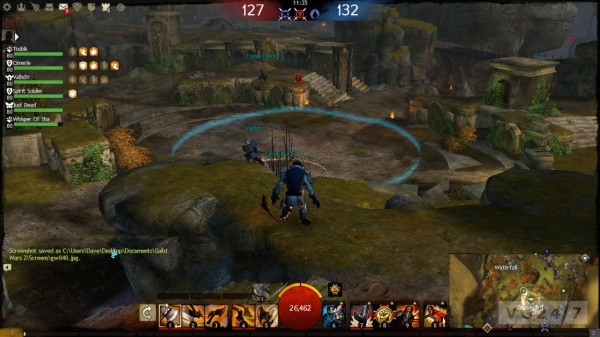 The tutorial teaches you three fundamental aspects of PvP, and that is capturing territory points, executing downed enemies and reviving falling team mates. Once you've figured that out - and you will in about ten seconds - where you go from there is up to you.

So I walked up to a PvP NPC and browsed a list of well over 300 available matches spread across numerous maps. It was clear to me that ArenaNet had clearly invested heavily in its competitive element, as the maps are varied and detailed. In fact, they bear a lot in common with FPS arenas.

Finding a match, I spawned in with my comrades on the red team. The mission objectives between matches can change a lot, but capturing territory, scoring kills and being the first to reach 500 points are your key goals here.

I instantly noticed a lot of level 80 character and thought 'shit...here we go, get ready for humiliation sunshine...', but ArenaNet has done things cleverly here in that many factors are normalised so you're all on a level playing field.

Think Call of Duty - in which everyone has the same health and susceptibility to attacks. There are of course buffs and other skills that bend those truths a little, but you won't be getting one-hit killed by a skilled level 80 guy any time soon. That'd just be horribly off-putting.

So I ran towards the heat of battle and then this happened: 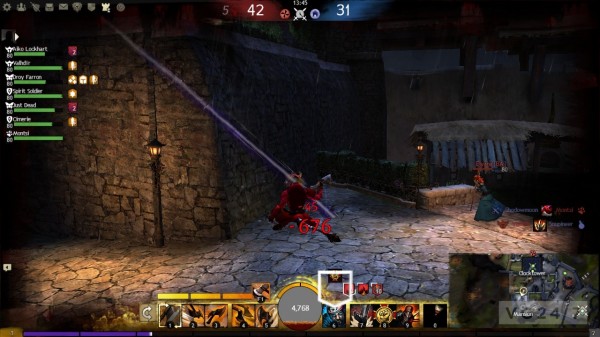 That's me getting utterly spanked by enemy magic. As soon as my health started getting sapped by some enemy I couldn't see, my old fears and confusion started returning. But again I soldiered on, and a pack of my team-mates backed me up as we rooted out the enemy and slaughtered them with minimal effort.

Just like the PvE world, teamwork is encouraged and you quickly find that everyone is valuable, and that everyone can make a difference just by lending each other a quick hand. The map seen above was huge and we set about capturing points and scoring kills until we emerged victorious.

I even began to work out nice little cocktails of buffs and attacks that I found worked well. After a few matches I was instinctively clicking my fury buff to increase my attack power, while launching into flurries of sword swipes, and even changing into a large, mutated state whenever I was swarmed by multiple foes.

This increased confidence and a sense of finally understanding how to compete sort of sums up the last three weeks for me. Sure MMOs can seem daunting to the uninitiated, but they all start - like most things in life - with a single step.

Millionaires didn't get rich overnight - they had to create or start something to put them on that path, just like an inventor needs that one bright idea to develop and grow into something much larger.

Looking back, I'd encourage anyone on the fence about MMOs to take that first step, or even just try a free-to-play mmo first to see if it sticks. Perhaps most importantly I'd say you should lay your presumptions to rest even for a few levels, because being open-minded in this industry can cause you to unearth experiences you never thought you'd see before.

I'll keep on playing Guild Wars 2 when my busy schedule allows, as I still don't want it to dictate my life, but yes, you can consider me a convert in the literal sense. I've always been an open-minded gamer, and MMOs were one of the last 'taboos' I had to quash. Now I can truly say that I'm a fan.