Guild Wars 2 has been out for a week now, and in that time VG247's MMO novice Dave Cook has embarked on a quest to further his understanding of the gene. This week he tries to be more sociable, with varying results.

I'm new to MMOs, but I've always understood why people enjoyed them. Part of the appeal is in collaboration, conversing with others and carving out your status online. I understand that, but once upon a time I used to view the social aspects of games like World of Warcraft and Guild Wars as a dangerous time sink.

As I mentioned in part one of my Guild Wars 2 journal, I use games as a way to unwind, and the thought of having to meet friends online at specific times to tackle quests felt too much like a job to me.

Back in my uni days I used to share a flat with three major MMO players. They had an absolute blast on World of Warcraft, but despite their best efforts to get me to try it, I couldn't be convinced.

Which was stupid of course because my mindset back then was basically this: 'Silly MMO players with their social interaction, time commitment and need to be places at specific times to do things. Oh hey, I've just put 120 hours into Final Fantasy XII alone in my room over a few months instead of studying, that's awesome.'

Yep, stupid isn't it? I actively avoided the MMO genre back then but today in Guild Wars 2, I'm making a conscious effort to open my mind and really get involved in the game. It's working too - I'm having fun and really get into the spirit of it.

Last week I got to grips with the world of Tyria, and created my Charr warrior Fastrez - my user name is fastrez.5140 on the Gunnar's Hold server if you want to say hi. I levelled up a lot, explored much of the Charr homelands and basically had a lot of fun.

But I was still dodging the social aspects of the game for fear of entering into some kind of unwritten contract that says I have to be readily available to a guild as specific times. So over the past week I've thrown out my fears and tried to be as social as possible.

Note the size of my sword in the above screen grab. One of the things I've noticed this week is that you don't have to grind all the way to Guild Wars 2's level cap to get gear that looks awesome. Even low level weapons look impressive, and I guess that's a smart move on ArenaNet's part to make the 'little' guys feel special too.

In fact, the game does go to lengths to make everyone feel special, even socially-reclusive players like me. As I'm now venturing into areas of the Charr homelands that are swarming with tougher enemies, I've found I'm rezzing downed players more often, and vice versa.

Guild Wars 2 makes players work together, even when they're not actively in a group or guild, and that is an uplifting thing to be a part of. Without saying a word to each other, players can come together to tackle events or bring down tough enemies. Everyone gets XP and loot, everyone has fun.

It's appealing sure, but it's missing the point of the social power of MMO games. Sometimes you can get more out of a game like this by opening chat window and actually talking with people. 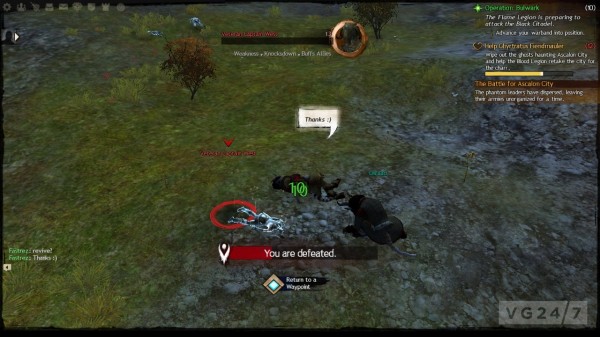 That's me down and defeated while some random player kindly brings me back to life. All I did was say thanks, they said thanks back and then we went off into an ogre cave for a while and slaughtered a pack of higher level enemies. That's a new experience to me.

I mean, I play Call of Duty online more than any other multiplayer game because I love it - as unpopular as that may make me among some circles - and sure, if you work as a team properly in that game you can utterly demolish the enemy team, but even that level of interaction feels faceless compared to MMOs.

In Guild Wars 2 it's a level of interaction that is - although this may sound trite - simply heart warming. Well, aside from the time one guy openly stated that people using the chat window in any language other than English should be outlawed. He was just a f**king moron.

So I used the chat window a lot to speak with people, said thanks for help, answered questions new players had regarding the game's mechanics and more. I said often in last week's post that Guild Wars 2 makes you feel useful and yes, that sentiment has only gotten stronger this week.

But still I was guild-less:

Gutted. However I received two guild invites as I booted up Guild Wars 2 on Saturday - one from a guild formed by UK game journalists and another created by one of my close friends. I joined both and was surprised to see that guilds aren't just a grouping mechanic, they're a whole new level of gameplay.

You have to remember that I'm coming into the MMO genre cold so this may not be news to you, but in a Guild you all contribute to the cause, be it saving up funds, collectively earning bonuses or upgrades and fast travelling to member locations, unlocking parts of Tyria that would otherwise take weeks to explore on foot.

I partied up with my friend's guild first and he fast travelled to meet me in the Charr homelands. Suddenly he had all of this new potential, all of these fresh new quests to tackle, and even though I had already done them all, I accompanied him on a few of them and levelled up a lot in the process.

But I was happy to do it as we were both helping each other and growing our characters as we went. We then ventured East - further than I had ever done before. There we battled our way into the haunted depths of Ascalon City, discovered hidden vistas for XP, and even took the time to dance on a cliff edge before stupidly falling to our deaths. Oops.

So what overarching truth have I learned about Guild Wars 2 and MMOs this week? Well, I now prefer adventuring with a second person as it's fun. You can share in a laugh, support each other and generally get more done. I've removed all stigma from getting stuck in and collaborating online.

But that said, if the notion of meeting up online to do stuff at specific times ever does get too much for me, it's comforting to know that I can tackle the whole game solo if I wish. Truthfully however, I think those days are gone:

Come back next Monday for part three of Dave's Guild Wars 2 journal, in which he fast travels all over Tyria to see new parts of the world.