Time to Kill in Destiny 2: Forsaken is being adjusted, so expect to die much faster in PvP.

Along with changes to weapon slots and ammo availability in Destiny 2: Forsaken, Time to Kill (TTK) will be reduced in the Crucible.

We'll glean more information on how everything is getting a "global lethality pass" during a combat reveal livestream on Tuesday, August 7.

Senior sandbox designer Jon Weisnewski will discuss the TKK changes, and other subjects such as weapon damage. A full demonstration of perks, mods, and loadouts is also promised.

Earlier this week, a new video showing how Forsaken weapons will dole out damage was shown. If you want an idea of how TTK will change, streamer tripleWRECK's post on Reddit explains things rather well.

Bungie said the first round of weapon slot changes will deploy on August 28 along with Bulk Shader deletion, and 200 additional vault slots. This is also the day PlayStation 4 and Xbox One players can pre-load the Forsaken expansion ahead of its September 7 release. You can find out what else is in store by looking over the updated roadmap below. 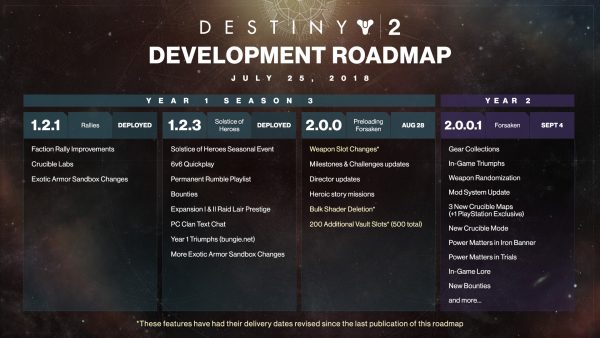 As a reminder, the Solstice of Heroes starts next week on Tuesday, July 31.