But that makes sense, right? The original trilogy wouldn’t feel right on modern tech. As good as the N. Sane Trilogy is, the design and the setup of those games has aged in 2020. We can do bigger levels now, cram more complex hazards into smaller spaces. We can have our cups overflowing with Wumpa juice, have our mechanics piled on so we can barely keep track of the new gimmicks, stage-to-stage.

You want dimension-hopping platforms? Go for it! Wall-running? Why not. The jetski from Crash 2? Here you are! More playable characters than you’ve ever seen in a mainline Crash game? Way ahead of you! Toys For Bob can’t stop handing out the gimmicks, sometimes to the game’s detriment. Some of these shiny new tricks and toys are more useful and inventive than others, and some are simply nods to platforming greats that have taken to the stage since the 90s (elements of Crash 4: It’s About Time simply wouldn’t exist without VVVVVV, Super Meat Boy or UbiArt-era Rayman, for example.)

All the creativity poured into the new masks and gadgets your Bandicoot siblings can mess about with is contrasted occasionally with some bad design. Some levels are straight corridors littered with funky enemies (all animated and brought to life with aplomb, by the way), and some seem to just cram in grappling hook segments or revolving platforms for the sake of variety.

You can’t help but think, when new control schemes or characters are brought in during the final world, if the numerous gimmicks would feel better if there were fewer of them. Why include a few Dingodile levels that handle awkwardly and clumsily when you could have spent that effort tightening up the rail-grinding sections, for example? 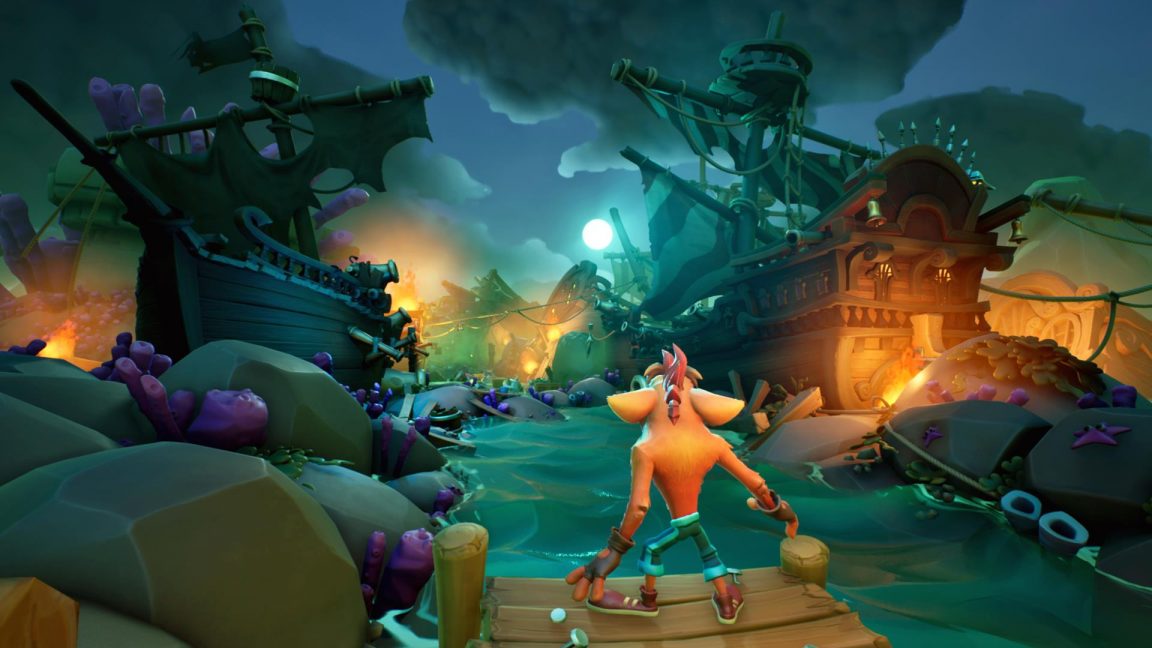 Other times, it’s the placement of enemies or the thinking behind certain environmental hazards that frustrates: do there really need to be two enemies in this one gap? Does this Nitro crate really need to be right at the end of this mandatory spin? Occasional gripes like this are compounded by an uncooperative camera, fairly consistent clipping issues and some dodgy controls when it comes to certain gimmicky mechanics. Just wait until you get to the rail-grinding sections, and you’ll see for yourself. Or maybe you’ll see how dodgy the depth perception and physics can be when you finally hit the ice levels.

Some design goofs really take away from how slick and fair the original trilogy felt, too, leaving some deaths or completion whiffs feeling frustrating and mean-spirited. Placing Nitro triggers next to the end-of-level marker so you overshoot and don’t blow all the crates in the level really hits you. Some Bonus Stages feel more sadistic than puzzle-y, relying on exasperating backtracking rather than one-off trick jumps, slides or spins to encourage you to collect everything.

But that’s not to say it’s not enjoyable. It’s hard not to imagine Toys For Bob grinning maniacally – countenances like Cortex or N. Trophy themselves – when piecing these levels together. They’re fiendish, they toy with you. The developers want you to become experts in gap-hopping, crate-smashing, and Wumpa-hoarding within minutes. And if you’re not, you’re punished. 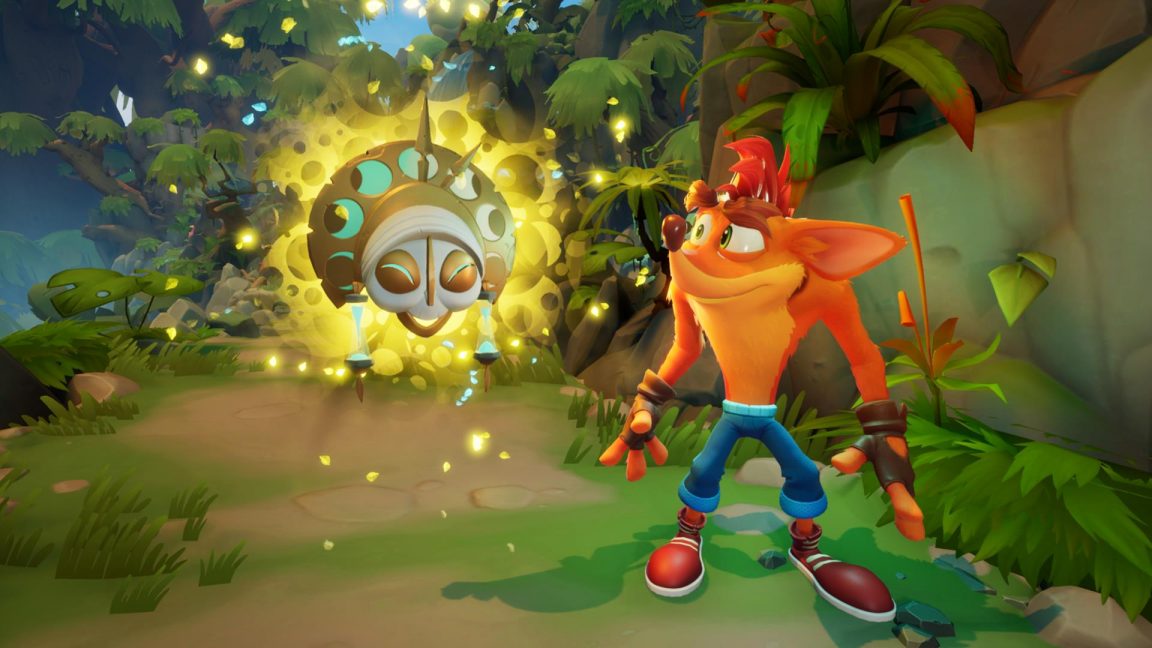 It’s a far cry from the original trilogy, that’s for sure. There’s a sadism and a delight in death in this game that the series hasn’t seen since the first title. Some hazards and level set-ups make you audibly groan as the camera flies past them. And yes, some of the new gimmicks (Dark Matter Spin, ugh) are tedious and the controls for them are wonky and awkward, but you can’t help but feel a sense of satisfaction and pride once you overcome the ludicrous challenge that’s been set for you.

The collectibles economy feels off, too. Back in the day, getting a gem for collecting all the crates felt fair: it was only in extreme cases that levels would have crate numbers exceeding 150. Here, in It’s About Time, you’re routinely tasked with collecting over 200 of the little wooden bastards: missing just one making all your effort redundant if you’re going for a perfect run. Again, there’s some sadism in where these are placed, too – tucked behind obstacles, hidden off-camera, surrounded by Nitro – and if you’re not fixated on your orange mammal’s surroundings at all times, you’re going to be made a fool of. There were flashes of this game design savagery in the original series, but rarely was it so explicitly mean.

If you can take being bullied by a game you’re supposed to be enjoying, there’s an absurd amount of content on offer in Crash 4: as well as the base levels, there are Flashback levels (all about uber-precise platforming), N-Verted levels (Dark World-style remixes on areas you’ve already played) and more treats besides.

It’s shocking just how much opens up as you progress, and Toys For Bob should be lauded for their efforts in composing this many brain-teasing platforming arenas. The amount of unlockable stuff, too, is pretty impressive – just be aware that completing this game 106 percent and collecting all those incredible skins is going to be no mean feat for the average player. A child-friendly game this is not. 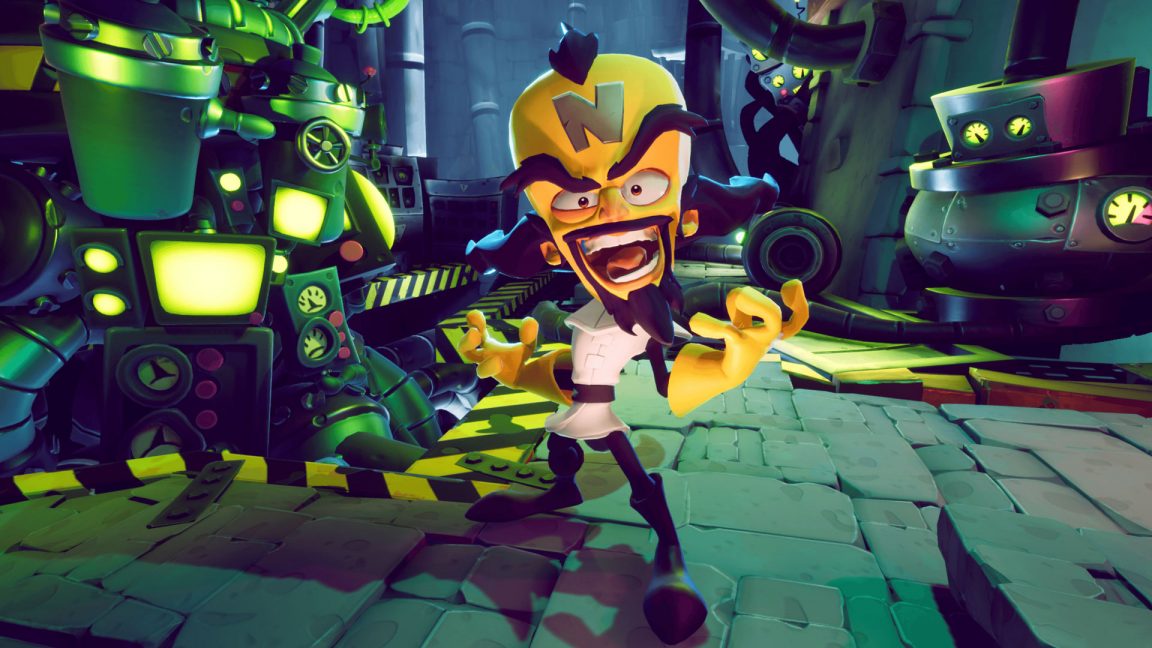 The odd tweak to Naughty Dog’s old formulas are welcomed, though. You can choose to remove the Life system, replacing it instead with a death counter (purists, don’t fret: you’re rewarded for clearing levels in under three deaths). This modernises the game substantially, and the ol’ Checkpoint Box spawning in areas you have particular trouble with makes a reappearance, too. Other little touches – like Ghosts in the Time Trials – really make a difference and heave Crash and Co. kicking and screaming into 2020.

That mechanical tinkering pairs really nicely with the fresh coat of paint everything has gotten, too. Toys for Bob brings its own highly-stylised and incredibly handsome art style to the game, and Walter Mair’s music is so on-point that you’d be forgiven for thinking they hired Josh Mancell back from the originals. The graphics, the art direction, the enemy design and the sound really can’t be faulted.

It’s a shame, then, that some of the level design choices don’t really pair up with the engine Toys for Bob has built this love-letter to 90s platforming games in. Loose and floaty physics, an abundance of different mechanics that often feel part-baked, and some design choices that feel sadistic – rather than simply difficult – leave this approach to Crash Bandicoot feeling less like a true sequel, and more like a licensed spin-off.