Splinter Cell Blacklist developer Ubisoft Toronto is looking to offer something different amid a glut of similar shooters. Dave Owen goes hands on to see if it succeeds.

Developed by Ubisoft Montreal, Splinter Cell Blacklist hits PC, PS3, Wii U and Xbox 360 from August 20 in North America and August 23 across Europe

Blacklist is billed as a return to the stealth roots of Ubisoft's series. Here's a clip of Sam being all stealthy to prove it.

The game also comes with a neat Spies Vs Mercs multiplayer mode. We've got footage of it running here.

There's even co-op play with Sam and his pal Isaac. Check out this gameplay footage of them both in action.

The 'white man with a gun' protagonist in video games has come under heavy fire as we near the end of this console generation. This is a result of the wealth of near-identical shooters that have dominated the market in recent years.

Ubisoft Toronto is looking to distinguish the upcoming Splinter Cell: Blacklist - the sixth game in the series - by combining a return to its stealth roots with an accessible approach that they hope will win over casual shooter fans.

I went hands-on with the first three missions of the game to see if Sam Fisher can be more than just another white man with a gun. Early signs are not promising.

Splinter Cell: Blacklist opens with several large explosions. A British bad guy and his team invade a US military base and slaughter all soldiers on site before blowing it sky high. Sam Fisher’s helicopter is caught in the explosion and he crashes just outside the besieged compound. It’s a bombastic, if somewhat familiar opening that introduces a brief tutorial mission.

The good news first: stealth is back, and Sam is immediately ordered to stay out of sight in the shadows. The bad news is that a number of generic third-person shooter elements were equally as prominent; straight away there was convenient waist high cover in abundance.

The group behind the attack calls themselves The Engineers. We soon discover that this was the first in a series of attacks called the Blacklist. The Engineers will unleash one new attack against the US every single week until all American troops deployed overseas are withdrawn. In response the US government establishes The Fourth Echelon. Sam Fisher assumes command of the team dedicated to foiling the terrorist plot. 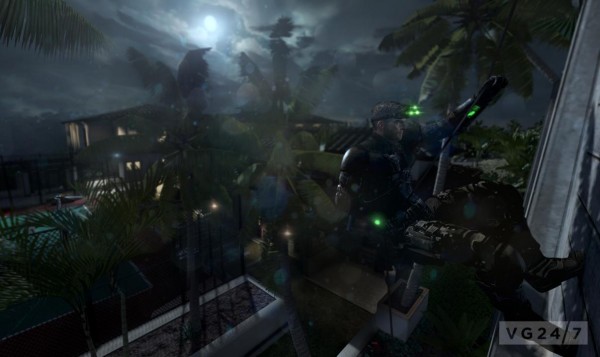 Sam’s new position sees some interesting additions to the series. The Fourth Echelon is gifted an airborne base called the Paladin that acts as a hub for the entire game. An interactive map (or Strategic Mission Interface) allows any game mode to be accessed at any time. So you can jump straight from a single player mission into co-op or multiplayer without exiting to another menu.

There’s an integrated social aspect too as friend activity is also displayed here. This seems unlikely to have a huge impact on the overall experience, but it certainly streamlines the interface. The Paladin can be customised too. I built an infirmary so that Sam would recover better when injured during a mission. Other options included an improved holding cell and a weapons development lab.

This focus on customisation extends into all elements of the game. The first full campaign mission takes Sam to Benghazi to infiltrate a militia stronghold and retrieve a hostage. Your loadout can be altered before launch with a huge array of kit.

Smoke grenades can be swapped out for sleep or tear gas. A sticky camera can make way for an EMP or surveillance drone. The visual options of Sam’s iconic goggles would make a Predator jealous. New kit is unlocked by currency earned in-game through successful takedowns, evasions, etc. It’s a deep system that supports, incentivises, and rewards individual play styles.

The majority of kit is geared toward stealth. The light meter of previous games has been replaced by the neat visual marker of a light flare on Sam’s gear when he’s sufficiently bathed in shadow. Success often relied on a careful and considered approach. The wealth of tools at my disposal presented several ways to remain undetected.

I could engage aggressively but quietly with silenced weapons and lethal takedowns from cover, or use noisemakers and smoke grenades to distract guards and leave them alive. In open combat it only takes a few shots to down Sam, so stealth was usually the best option. Lights can be switched off, bodies hidden, and walls and ledges thoroughly traversed. In many ways, it felt like a classic Splinter Cell experience. 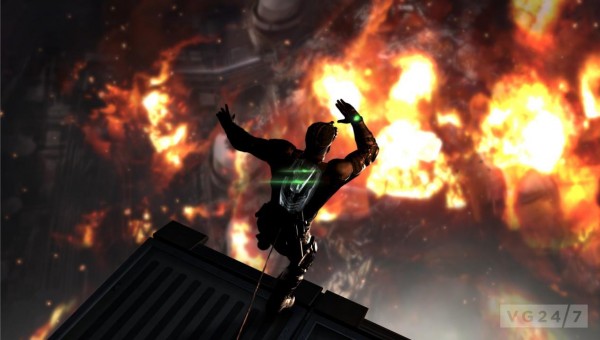 Unfortunately this was frequently undermined by prevalent heavy-handed action elements. These opening missions were heavily checkpointed, the next objective marker never more than 50 metres ahead. This often made the missions feel frustratingly restrictive. Although each area contained multiple routes, the strict checkpoints made exploration feel arbitrary.

Environments felt as if they had been divided into arenas, each filled with all-too-convenient waist high cover. This often stymied my stealth options. I had all these gadgets at my disposal, but little opportunity to use them creatively.

Another action ability that felt unwelcome was Execution. This allows you to designate targets and press a button to dispatch them automatically. It worked better here than in, say, Hitman Absolution, as targets are designated in real time and had to be in close range, which encouraged more strategic deployment. But it still felt at odds with the stealth, offering a get-out-of-jail-free card for difficult situations.

It was genuinely startling how many shooter clichés were packed into two missions. The Benghazi mission ended as an escort-the-hostage affair and forced me into direct combat against waves of enemies. The second full mission, an infiltration of a militia base in Iraq, opened with sniping enemies from a helicopter in a sequence that could have been snatched wholesale from a Call of Duty campaign but for the clumsily tacked-on stealth element.

If I alerted a guard the mission was failed. The same mission went on to present generic torture scenes and ended with a mad dash through the fire and falling rubble of a collapsing building. Frankly, it could have been a mission from any shooter released in the last three years.

This mission also introduced player choice in the form of moral decisions. Upon pinning a particular foe to the wall I was given the option to shoot or spare him. My decision seemed ultimately meaningless, as he ended up dead either way. It’ll be interesting to see if this is developed further over the course of the campaign. There’s certainly room for it within the central theme of terrorism and overseas conflict.

Any serious commentary seems unlikely. Everything I saw was delivered with a near-cringe worthy earnestness. Generic military teammates spouted acronyms while a sarcastic hacker sidekick said things like “Hold on, just putting the finishing touches of awesome to this puppy!”

It was all tied with a bow of pro-American sentiment that made me feel uneasy about how many dark-skinned foes I graphically slaughtered in Libya and Iraq respectively. 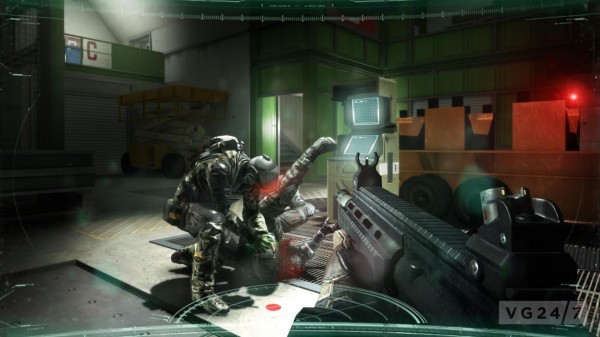 Although sound issues and a crashed Xbox 360 limited my experience of the multiplayer, it seemed free of the campaign’s problems. There might be real reason to celebrate the return of the Spies vs. Mercenaries game mode.

We played ‘Blacklist’ mode, which featured teams of 4 four and customisable loadouts (the other option is ‘Classic’, where teams are limited to pairs with predetermined kit only). Spies use stealth and cunning to hack terminals, while Mercenaries assume a first-person viewpoint to stop them.

Customisation here was just as extensive as the campaign, with so much kit to unlock that players are bound to return time and again. This went a long way to encourage different play styles. Spies have severely limited offensive options, meaning their gear must be carefully chosen.

As a Spy I died numerous times from running too hastily into a firefight. Before my console crashed it was clear that multiplayer puts a strong focus on strategy that made playing on either side genuinely tense and competitive, and could offer a refreshing take on online multiplayer shooting.

Splinter Cell: Blacklist might prove to be divisive amongst fans of the series. On this evidence, Ubisoft Toronto’s attempts to give the game a broader appeal might undermine what made the series so popular in the first place. It remains to be seen if the seemingly disparate stealth and action features will begin to mesh as the game goes on. So far, Blacklist feels competent but compromised.

Disclosure: Dave played the first three missions of the Xbox 360 version of Splinter Cell: Blacklist at a press event in London organised by Ubisoft. Catering was offered but not accepted.

Splinter Cell Blacklist hits PC, PS3, Wii U and Xbox 360 from August 20 across North America and August 23 across Europe.