It’s clear that realism is at the heart of Call of Duty: Modern Warfare, whether you like it or not. I feel it in the heaviness of every single shot and step as I play the multiplayer for the first time at the reveal event in Los Angeles.

The guns have much more weight to them than usual and shots properly throw them around. Recoil kicks LMGs’ sights like a mule, but that comes with being able to shoot through most materials, unlike the lighter guns.

With that weight comes a noticeable slow down in the overall pace of each match. The dramatic changes brought about by the addition of wallrunning and jetpacks in the furiously fast and futuristic combat of Black Ops have been reversed. Instead, Modern Warfare’s new mechanics encourage more positional play. You can peek through doors (or breach them with any explosive force) to scope out the environment ahead as well as shut doors behind you to close down sightlines on your position. You can also mount your gun on almost any vertical or horizontal surface, which helps counter the hefty recoil, especially when firing at a moving target halfway across a map.

Not that any of these additions particularly suit my playstyle in Team Deathmatch or Domination as I find being mobile to still be the best tactic. If I can flank you, I will. But these nuanced mechanics complement the increased tension of modes like Cyber Attack - which is essentially Search & Destroy with a neutral bomb - as having no respawns each round makes you play more carefully. What will affect most people’s moment-to-moment gameplay is how the attempt to achieve realism alters the micro decisions you make in every firefight.

The faster you’re moving the longer it takes to aim down your sights. This has always been the case but there’s no perk that changes that here. It’s actually the result of having your soldier’s head move independently from their gun so that they’re affected differently as forces act upon them. This makes movement more wobbly so you have to take it into account at all times. Shoot from a stable, standing position and you should win in a firefight over someone you caught sprinting at you. 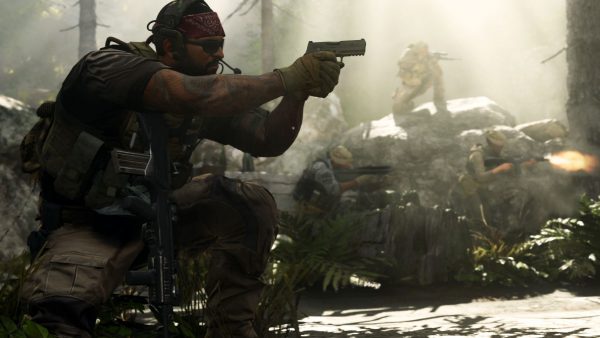 As Infinity Ward studio head Pat Kelly details how this new physics system affects gunfights he seems to take a moment to directly talk to the people who complained about the ‘sprint out time’ in Call of Duty: WW2. He makes it clear that these kinds of tiny design decisions that have a big rippling effect won’t be changing in Modern Warfare, so you’ll just have to get used to them. The team are listening to the community but realism is king in this year’s instalment, so they won’t budge on how movement and aiming works.

If you’re a fan of the previous Modern Warfare games and played them anything like I did, you’ll know not to sprint around the maps anyway. This goes for this year’s Modern Warfare, too, as Infinity Ward has deliberately fought against the three-lane map design that’s dominated multiplayer shooters in recent years. There’s a renewed focus on encouraging players to find their own routes and high points, especially ones the developers haven’t found themselves. Instead of picking a lane to run down, you can create your own.

Remember how people discovered you could get on the crane in Modern Warfare 2’s Highrise map? Infinity Ward want to see more of that - multiplayer design director Geoff Smith refers to it as “oh my god, how did you get there” moments. I live for this shit. So I have a great time ignoring any ladders and instead clamber up rubble, jump at odd angles towards balconies, and work my way up tall walls along narrow crevices. You can view each map as a playground full of platforming puzzles to be solved if you want, this exploration rewarding you with access to elevated positions. I find at least a couple of dirty little hideouts that offer an advantage over those running around on the ground.

Reinstating this sense of discovery is justified as being part of Modern Warfare’s realism as it apparently mirrors how the Navy SEALs pick apart an environment. But for me it’s the night vision combat that epitomises how far Infinity Ward’s pursuit of realism goes. For starters, your soldier holds their gun at an odd angle when aiming, since the night vision goggles obstruct them from holding it in the normal position. It’s an absurd level of detail that contributes to why I find myself unexpectedly excited about the change of tactics on offer in the night maps.

You can choose to have an infrared laser sight on your gun to make your aim clearer, but that comes at the cost of giving away your position to the enemy. Enter the dark tunnels of Azhir Caves with night vision on and you’ll see lasers beam from around corners, telling you how many targets are approaching from that direction. This is a great opportunity to make use of flashbangs and thermite to blind players. Or you can flick a switch to turn the lights on mid-match to blow out the night vision and dramatically alter how the map plays from then on. An alternative way to play the night maps would be to equip the heartbeat sensor so you can detect nearby threats as you move through the pitch black.

It’s these kinds of possibilities born out of the map design that I connect with most in Modern Warfare. That, for me, is the biggest return to form for the series. The 2v2 Gunfight makes it abundantly clear that Call of Duty is the best in the business at firefights in tight arenas. All four players are given the same loadout so no one has a direct advantage due to their weapon choice. This puts the priority on team-based tactics and intelligent plays that make the most of the map knowledge and playing psychological games. I make a sport out of predicting where enemies are and coming up behind them. It’s all about knowing how people think so you can use fakeouts to force them to run into vulnerable locations.

These tricks don’t work so well when I play the 20v20 Domination mode. That probably explains why I don’t enjoy the larger-scale battles that Modern Warfare can support due to the power of its new engine. Infinity Ward is currently trying to figure out what the sweet spot is for the bigger matches and are testing it out by playing with over a hundred players at times. This isn’t a battle royale mode - it’s Call of Duty’s traditional modes as we know them, just on a much larger scale. I find that I die a lot without even spotting who killed me, and that doesn’t feel good when I have to do a lot of running around just to encounter enemies. But if you enjoyed the chaos of Ground War in previous Call of Duty games then these larger-scale maps may be more to your taste.

The question that comes with talk of a hundred players on massive maps is whether there will be vehicles to drive. Not much has been said about it, but in the bigger maps there are ATVs that one person can drive and another can hop on the back as a gunner. There’s also the infantry assault vehicle, earned as a killstreak reward, which you can drive around on certain maps. You can even have someone man the .50 cal machine gun on top to wreak death and destruction. It’s not a tank, but it’s not far from it. My takeaway from the larger maps and bigger player counts is that just because Infinity Ward can put them in Modern Warfare that doesn’t mean it should. But the developer is still figuring out how these modes will work and I’m open to having my mind changed once it does.

What I do acknowledge is that Modern Warfare’s multiplayer is made of many parts. You can pick which modes you like and stick to them. It’s a sentiment that guides a lot of the other features, including the new Gunsmith option. Infinity Ward want guns to be the main characters and so have provided a wealth of options to customise them. Some of the rifles let you choose from as many as 60 different attachments. You can only have five on at one time and given that each one comes with its own disadvantages you may not want to hit that maximum. But you can really geek out on the gun selection and tailor each loadout to your personal playstyle to a degree that goes way beyond what Call of Duty has offered before. 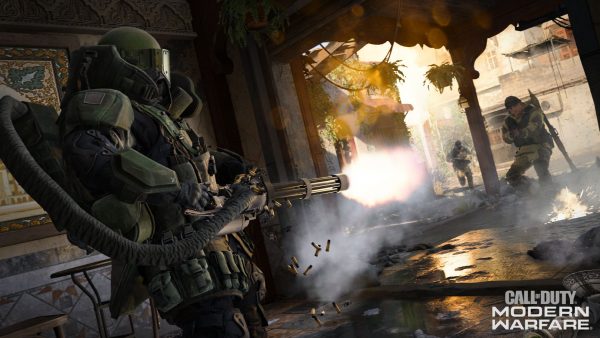 That extends to letting you customise the perks and killstreak rewards you have active. No longer are you restricted by your choice of class as in Black Ops 4. You can mix and match your loadout as much as you like within the set parameters - no more than three perks and three killstreak rewards, for example. Operators still exist but only differ by their aesthetics - that includes appearance, voice pack, and style of execution (hold melee down to perform a nasty kill animation).

And yes you read that right: scorestreaks have been dropped in favour of killstreaks. This restores that wonderful tension that comes with knowing you’re only one kill away from getting a chopper gunner or care package. Get ready to find a spot to hide in so you can hopefully secure an easy kill and then go ballistic as your kill count flies through the roof. Fan favourite killstreak rewards like gunship and cruise missile (aka predator missile) are back, but there are a few new ones, too. No nukes, though. If you must know, the top killstreak at 15 kills is a juggernaut suit. Yep, you put it on and become a heavily armoured nightmare with a minigun.

If you struggle to get killstreak rewards then some of the disappointment is lifted by the field upgrades. These are on a timer that recharges several times over the course of a match regardless of how bad you’re playing. You can pick only one, but they include a munitions box that gives you a random gun and restores your team’s ammo, a tactical insertion so you can choose where to respawn, as well as a recon drone, deployable cover, and stopping power rounds. It’s a clever way to help you out of a rut and make everyone feel like they’re contributing to the team’s efforts. Again, every playstyle seems to be catered to… even if your playstyle is an octopus covered in vaseline.

After a few hours playing it, I’ve come to think of Call of Duty: Modern Warfare’s multiplayer as a straightening out of the whole series. For a few years now it’s felt felt like the series has been playing catch up with other shooters - first it was Titanfall, then Overwatch, and more recently Fortnite. Modern Warfare feels like an effort to reinstate what drew fans to the games in the first place, and then punch it up. That works for me.

Activision paid for flights and accommodation for this preview event.