Apparently loading your Skyrim mods incorrectly can potentially change the Dovahkiin simulator into a game where there is no such thing as eyeballs anymore.


Loading mods wrong can have a range of effects on how Skyrim actually plays out. Whether said mods conflict with a necessary narrative aspect of the game or simply render certain errors that lead to absolutely ridiculous bugs, modding your game invokes an inherent risk of absolutely breaking it.

That’s pretty much exactly what happened to a user called Camjdent on Reddit. Check out the post below.

HELP my skyrim characters have NO EYES from skyrim

“Hi guys,” writes Camjdent. “I’ve only just started experimenting with mods today for a laugh, to come to the realization that when I have loaded up my game, some of the characters do not have any eyes. They just have empty eye sockets.”

That’s a weird one, isn’t it? I’ve heard of giants riding dragons as a strange result of having one too many mods installed, and seen a person who somehow managed to mod their game in such a way that guards simply stopped wearing clothes. I’ve even stumbled across what Skyrim looks like with a whopping 300 mods in action – spoiler: it looks very different.

But no eyes – all I can ask is how? What niche aspect of Skyrim’s source code had to be wrangled with in order to specifically target eyeballs and only eyeballs? The eye sockets are still there, according to the Reddit user, and I assume that people still have eyebrows. It’s just the physical ball itself, and the retina, iris, and cornea that come attached to it. 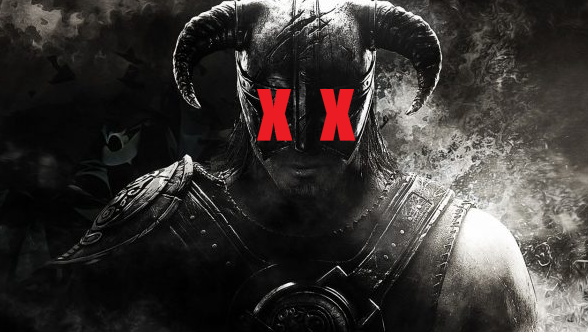 In other things Skyrim and mods, somebody recently modded Alduin – yes, that Alduin, the World-Eating dragon king – into Digital Combat Simulator. Despite having access to literal fire breath, he doesn’t fare very well against a fighter jet.

Meanwhile, lots of beans from Fall Guys have made their way to Skyrim somehow.

Hint: it’s because of mods, obviously.