I have pumped a significant amount of hours into Skyrim over the last nine years, but had never heard anything about dueling the Companions in Jorrvaskr until about five minutes ago.


When I say I’ve been knocking Alduin out since day one, I mean it. I’ve played Skyrim at least once a year since it launched in 2011, and most of the time I’ve ended up playing the whole way through. I once bet my mate that I could platinum Skyrim: Special Edition in under 50 hours on PS4 and did it in 41. That’s how well I know the game – but I didn’t know this.

A recently published Reddit post draws attention to the fact that you can engage in some friendly sparring with your Shield Brothers and Sisters in the mead halls of Jorrvaskr.

Basically, you walk up to Aela, or Farkas, or Skjor, and you clock them right in the jaw with a box. Now, because they’re your mates, they’ll let you have one freebie – but if you hit them again you’d best be prepared for fisticuffs.

The thing is, hitting your Companion pals a box doesn’t add any septims to your bounty. Also, if you sheathe your fists – if Cavill can reload them, surely the Dragonborn can sheathe them –  then the fight is over. It means you lose, obviously, but I think it’s fair to say that if you knock them into that unconscious state essential characters in Skyrim go into and then put your hands down, you’re basically the World Heavyweight Champion. 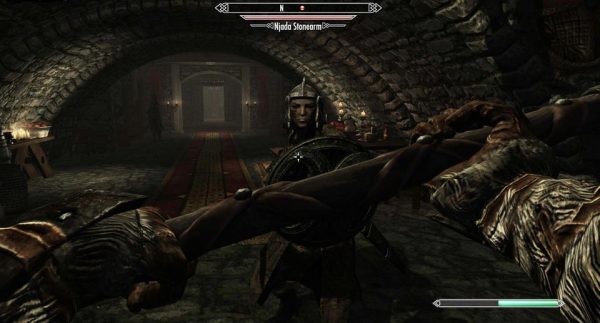 Again, I never knew this. Granted, I don’t usually fight the Companions for no reason – they’re supposed to be my friends! – but still, it’s interesting to see that the game actually allows for you and your warrior mates to have a boxing match for practice.

Anyway, here’s what Skyrim looks like with over 300 mods installed.