The coronavirus is a topic that’s hard to get away from – heck, you’re reading an article relating to it right now. I live in a country that’s currently just one step away from military-enforced quarantine. Last week, anything save for healthcare providers and supermarkets closed, and this week a fine for get-togethers of groups larger than two people was added to the mix. Grocery shopping feels like playing Social Distancing Twister, and even if I’m just at home minding my own business, something always lingers in the back of my mind.

Convinced that sometimes the only way is forward, I bought Kind Words by developer duo Popcannibal. Released last summer, the principle behind Kind Words is simple: people anonymously post and look at requests, small notes that can be about anything and everything. Whether you’re having issues at your job, problems in a relationship or simply can’t sleep, you can write a digital letter and someone will get back to you and offer support. There are only two rules: don’t post identifying information about yourself or others and, most importantly, stay kind.

Multiple friends of mine had reassured me that right now, the Kind Words community was the place to be, and the thought of being able to voice my own anxieties in a judgement-free space suddenly seemed very tempting. More than that, I saw Kind Words as a chance to regain control. I wanted to help others without getting overwhelmed myself, something I tried and failed at on other platforms such as Twitter and Facebook.

To my great surprise, Kind Words, the one community I thought would be absolutely overrun with unspecific anxieties relating to COVID-19, seems to be relatively unaffected by it. Kind Words’ creator Ziba Scott confirms this. “The pandemic is definitely becoming a topic in Kind Words, but not the broad focus,” he tells me via email. “People have always brought very personal, individualized thoughts into Kind Words. They still often write about very personal concerns even when the context is the virus. They are worried about a specific relative. They were supposed to start a new job, but it’s in question. They feel their friends have let them down by not checking in on them. All the extra homework is a pain.”

That’s great, actually. I can’t do anything about a virus, but I can tell a fellow user how to keep their room tidy. I can tell them about the time I too thought I would never find a job, something I ironically went through during the recession of 2009. For close to a week, I spend two hours each day on Kind Words, furiously answering anything I come across I feel I can help with. For a while I feel like I’ve gotten away from hand washing songs and people turning into armchair virologists, but Scott is quick to clarify Kind Words isn’t untouched by current developments.

“What I’m seeing is the pandemic exacerbating ‘normal problems’, so I’m not surprised those outnumber the pandemic discussion. If money was tight before, it’s worse now. If your long distance relationship was draining before, well now you don’t even know WHEN you’ll get to see them again. Everybody who was already worried about their health or someone else’s health, now has a multiplier on that worry.”

For a while I get the same feeling of flow from Kind Words I get from a video game, wildly answering requests to attain a sense of satisfaction, but despite allowing you to unlock new songs with consecutive visits and giving you a few stickers to collect for answering requests, Kind Words is designed to strictly prevent the gamification of kindness. 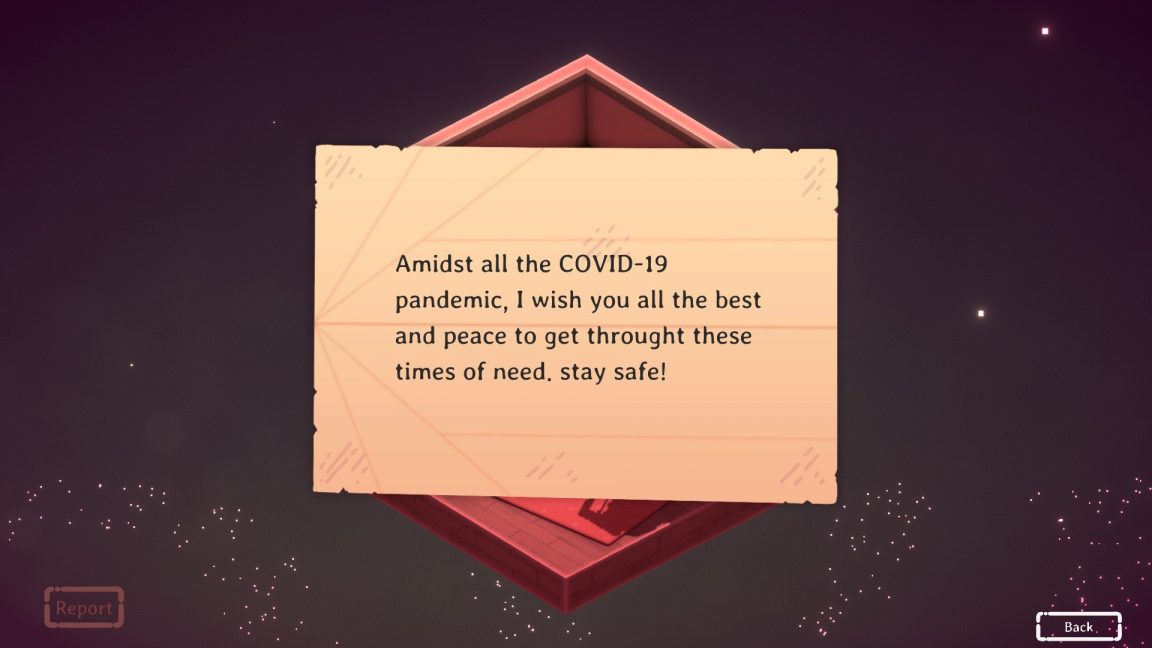 “You’ll notice there are no steam achievements. That’s not just me being lazy. Wherever possible we avoided all the quantitative rewards that you get from other social media platforms. No like counts, no friend counts. You don’t know how many people saw your requests. There’s no tally of how many times you got the same sticker. It’s important to us that the rewards you get from Kind Words spring directly from the actions you take and not from metrics that give a disembodied sense of accomplishment,” Scott explains.

It looks like that feeling was all me, then, and it doesn’t last long: after a few days, I begin to notice another issue with my approach. Spending just two hours each day trying to deal with other people’s problems is starting to drain me pretty badly. I come across people who are obviously depressed, and my heart bleeds for each and every one of them. That’s where the reporting feature comes in. Reporting in Kind Words is important, not only to shield people from trolling, but to make the moderators – Ziba Scott and his co-developer Luigi Guatieri themselves – aware of users you worry about. “We’ve received about 50,000 reports so far and we review all of them,” Scott says. “97 percent of content submitted to Kind Words is either beneficial to the community or neutral. About 2 percent is noise and 1 percent is trolling. There’s no censoring, all we do is minimise visibility of such content. User reports, combined with some automated measures to identify abusive activity have been pretty successful so far in managing the 3 percent of content that needs attention.”

However you think about it, dealing with a large number of reports that are worrying is no small feat, so I ask Scott if Popcannibal ever feel the strain. “Moderating Kind Words means reading the private thoughts of a lot of extremely stressed and depressed people. It can be shocking. It especially was in our first few months. It’s a constant reminder that we’ve invited people to bring their most vulnerable selves into our digital space. And because of that, we feel a responsibility as hosts to continue the upkeep necessary to give each player an opportunity to feel heard and cared for.”

Clearly, Scott knew what he was getting into, and even a global pandemic hasn’t changed how he deals with his community, which also comprises a Subreddit, Discord channel, Steam page and Twitter. 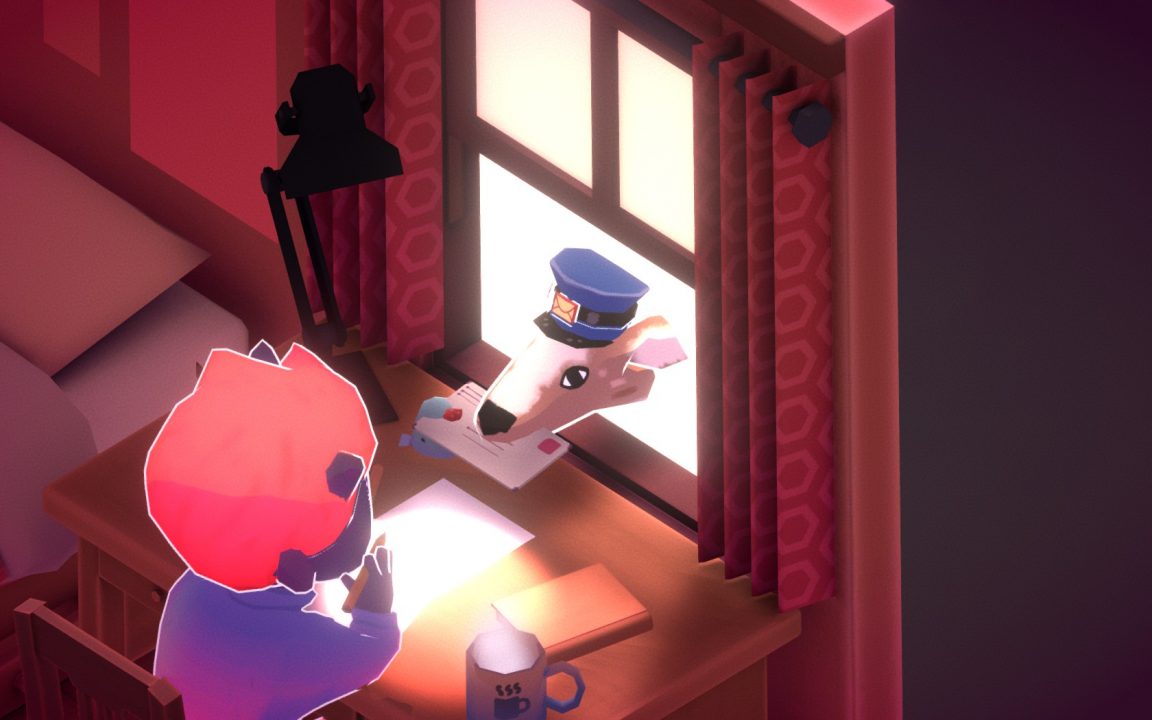 “People are talking about COVID-19, but I wouldn’t say there’s much of a difference because of the pandemic so far. Though that could change. People were stressed and scared before the pandemic. It’s a big, shitty part of being human.”

When I tell him about my attempt to do something useful to feel in control, to fix someone else’s problems in order to get away from my own, something that after talking to him both feels trite and impossible, he puts my mind at ease.

“Don’t discount the value of acknowledging someone’s fears. We get a lot of feedback from players that just being sure they’ve been heard is meaningful. I don’t think many players come to Kind Words looking for other people’s advice to “fix” them. They mostly want to not be alone, to listen and be heard.”

I can’t do anything about a virus, but I can do that.