With that said, I think GeForce Now has already positioned itself as a market leader, that different-angled approach helping it to surpass problems that have left Stadia stumbling. That’s impressive – but especially so given that Stadia is still definitely the slicker and easier to use of the two services.

GeForce Now has been in beta for a couple of years, but this week it went live to a wider audience; anybody can now sign up and play. What sets GeForce Now apart from Stadia is that it wasn’t built as a replacement for the existing video game ecosystems – rather, it was built as a companion to them. 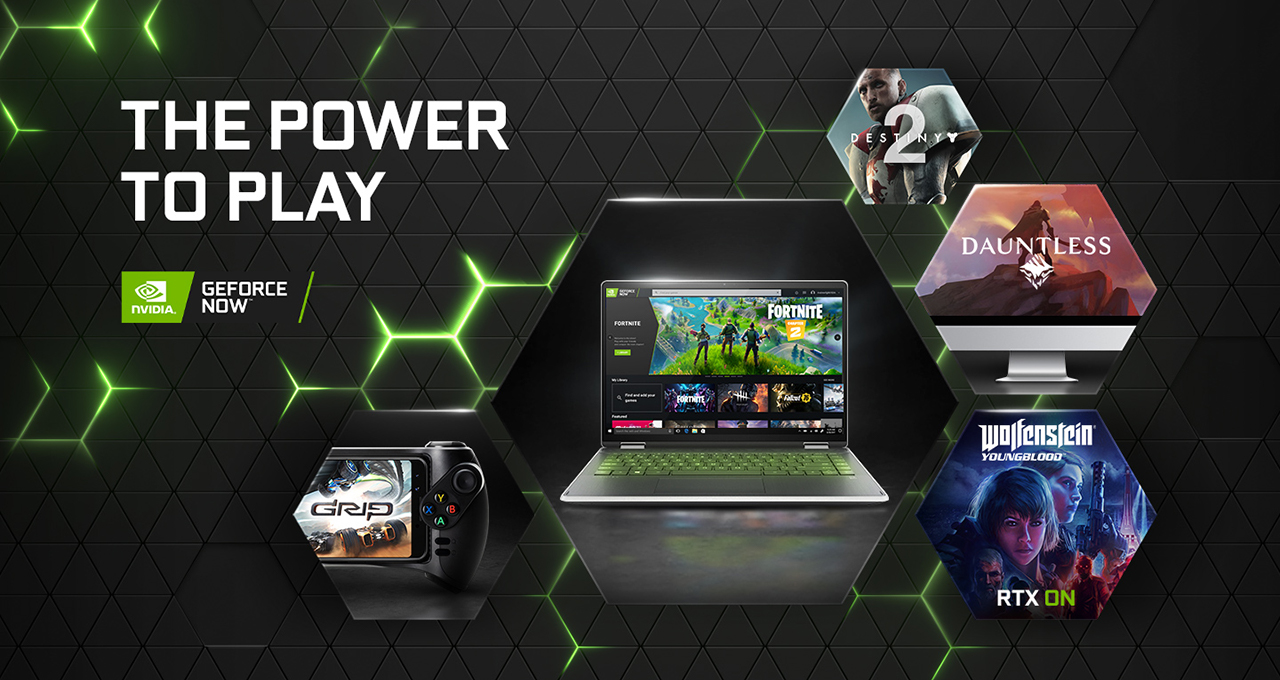 When GeForce Now was first unveiled, cloud gaming was still a futuristic experiment and one mostly associated with the failures of OnLive and Gaikai. Nvidia saw in it a value-add for the users buying its PC hardware, however. The company had already developed the technology for private streaming, where your high-powered PC at home might stream a game to a different room or to a mobile device. This essentially takes that work and spreads it as broadly as possible: now, you can stream stuff to compatible devices without having your gaming PC turned on, since it’ll be coming from an Nvidia-ran server stack powered by similar hardware. That, in turn, means that you don’t necessarily need the PC at all.

So whereas Stadia pitched itself as an all-new platform, another rival to PlayStation, Xbox, Nintendo and the plethora of PC store fronts, GeForce Now has built itself into those last few ecosystems. You have to own a compatible game to stream it, of course, but you can own it on a number of compatible stores. You can boot the Wolfenstein series within GeForce Now via your Bethesda PC store ID if you own it there, for instance, or you can log in to your Steam account and get it that way. All the service cares about is if you own the game on a compatible platform.

There’s already hundreds of games available, and this therefore eliminates one of those problems with Stadia: paying full-price to double dip on a game just ‘cos you fancy playing it on your lunch break at work via your phone. Because booting The Witcher 3 through GeForce Now is essentially just logging into a remote machine that then boots the game via a fully-fledged version of Steam, all the associated features theoretically come with it. DLC you own will automatically be present. You’ll unlock achievements and trading cards. The game will have the latest updates. If cloud saves are supported, all your progress will be ready and waiting for you, then synced back when the session is over.

For existing PC players, it’s a bloody great feature. You could boot GeForce Now on a low-powered business laptop in a hotel room while away on a work trip, or whip out your phone while waiting for a train if you can nab a sufficiently strong, fast signal – which is getting easier with 5G spreading. By linking to your existing accounts and game libraries and ecosystems it makes the promise of streaming truly relevant for existing gamers with existing hardware – you can use this to pick up where you left off when away from your gear. That’s great – and it’s the same thing that Project XCloud will likely excel at, albeit within Microsoft’s Xbox system.

But what about those elusive newcomers? The casual gamers that Google believes it can upsell to stuff like Assassin’s Creed by making it playable on their phone? Well, GeForce Now is currently less than ideal for them, and that’s where Stadia wins. On Stadia, games boot and close seamlessly, with minimal wait times. Here, there’s a bit of a hitch here and there – you might need to wait for the remote PC to speak to Steam, Epic, UPlay, Battle.net or whatever service you’re going through. And of course, to play games, you’ll need to have accounts on that service. While technically possible, buying games through GeForce Now isn’t really what it’s designed for, either – so you’d need to have the steam app elsewhere, on PC or a tablet or a phone or something, to make game purchases.

Likewise, controller support acts a little strangely. When I boot Wolfenstein Youngblood via GeForce Now on my Nvidia Shield with an Xbox One controller, I’m warned that the game doesn’t have controller support. Once the virtual machine streaming begins and Steam opens up it becomes clear it does, however. That’d be confusing for newcomers, and there’s little pitfalls and foibles like this right through this first release of the service. These are the sorts of things that PC veterans will breeze right through but newcomers will get stuck on.

GeForce Now also needs a little work on availability. There’s great PC and MacOS apps and a solid mobile effort, but most people are going to want to play through TVs. The optimum route to that right now is via an Nvidia Shield – an excellent device, but one which in its cheapest model is still £150. The natural step, of course, would be complete GeForce Now support on devices like Amazon Fire Sticks and Google Chromecasts. A cheaper, streaming-focused Nvidia Shield seems like a smart idea too – it could be sold with a GeForce Now subscription bundled right in. 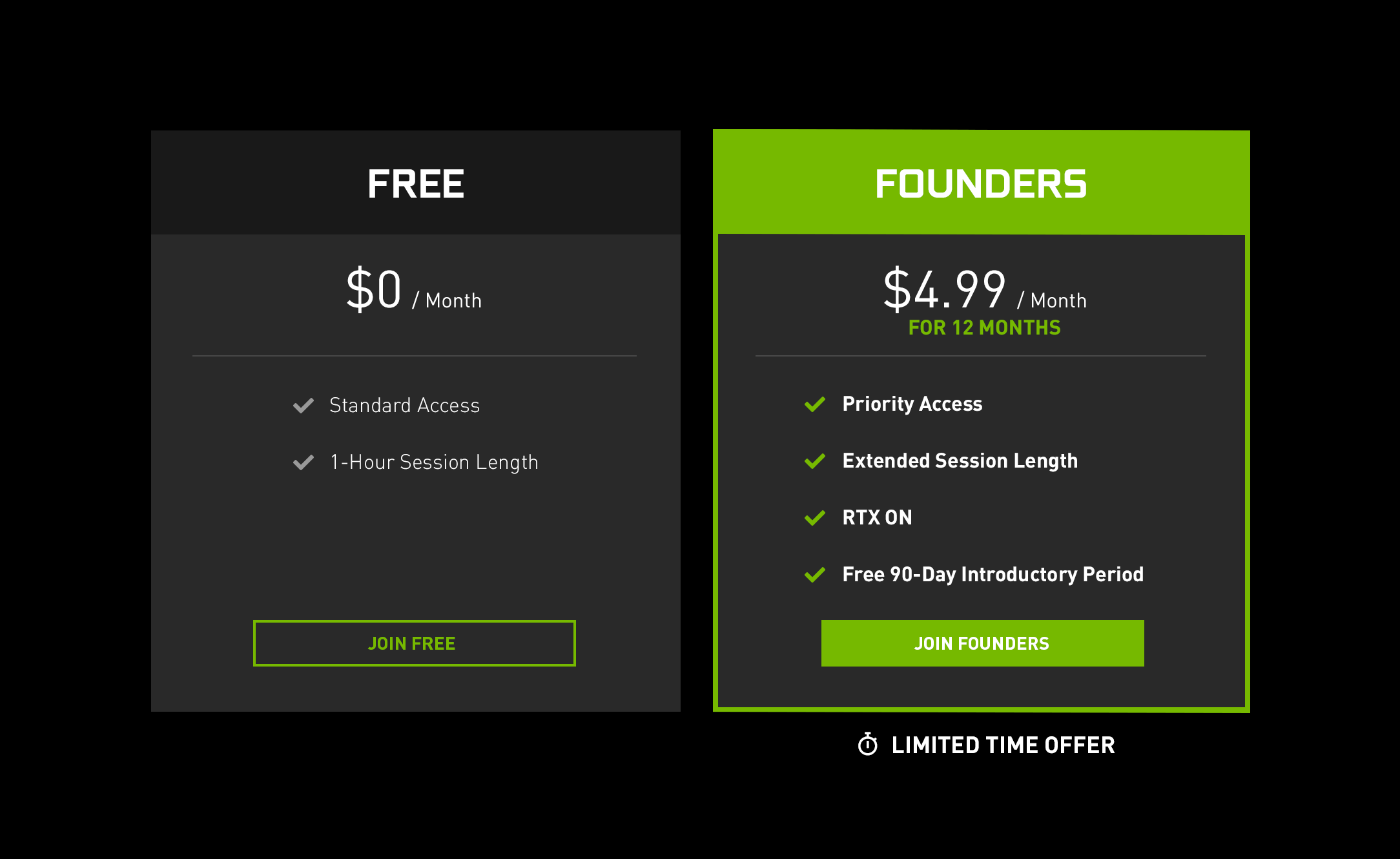 With these shortcomings noted, it’s still hard not to be impressed by the value that GeForce Now offers. You can play one-hour sessions for free. $5/£5 per month currently nets you the ‘Founders’ package which for the next year at least will get you extended 6-hour continuous play sessions, graphics settings equal to an RTX 2080 – a £600 graphics card. You only get 1080p, but powered by a card like that you will generally get max settings and a rock-solid frame rate in most every game. Plus you can expect ray tracing in games that support it.

Metro Exodus is a great ray-tracing enabled game to mention here; it’s available on Stadia, PC and the consoles. Stadia can get the game to 4K, but without the advanced lighting technology and only at 30 frames-per-second and at double the subscription price of GeForce Now. Nvidia’s service doesn’t yet reach the 4K resolution, but nails that important 60fps and adds the incredibly realistic lighting feature.

It’s worth noting all of this just works, too. It’s streaming, so of course there are hitches, but GeForce Now has some nice warnings and tests to tell you if you need to switch your router to 5G or obtain a better connection, and even flags up things like connection instability in the corner of the screen while in-game. For a service on launch week I generally was very impressed, however – fighting games like SoulCalibur 6 and Mortal Kombat 11 felt right on the service, at least for casual play, and that’s an achievement.

Obviously, the streaming battle is only just beginning. Project Xcloud is a huge part of Xbox’s next generation plans. Google allegedly has all that dodged tax money with which to fund Stadia expansion. There’s also PC rival Shadow, Sony’s inroads into this market and even individual game-based options like the Asia-only steaming powered Switch versions of games like Resident Evil 7. GeForce Now has instantly become a frontrunner, however. It has a strong price, great support for existing games, and it just works. Here’s hoping its delivery can be streamlined to make it as instantly accessible as Stadia.