Five years into the current console cycle, Forza Horizon has emerged as the unlikely hero of the Xbox One line-up. While Halo has faced issues and new Gears of War developer The Coalition is still coming to grips with the series, Horizon has consistently thrilled in its three Xbox One outings.

With Forza Horizon 4, Playground Games has the added pressure of being the 2018 game most likely to convert newcomers to Xbox Games Pass; not just to make them sign up for it, but to keep them subscribed. A cynic might say that Forza Horizon 4’s structure, with its rotating roll-out of new seasons and events over weeks and months, has been designed specifically to keep people on the hook as long as possible. Yet the more time I spent in Forza Horizon 4, the happier I am at the prospect of being able to return to this game over weeks and months, watching the seasons change, living in this world.

During the game’s introductory sequence, the game’s quasi-narrator sums up the shift in focus: “it’s not your dream holiday anymore; it’s your dream life”. This signifies a significant shift in tone and intent from the previous game. Forza Horizon 4 is less fussed about whether you’re winning races than previous Forza games were – simply competing, putting time in, is rewarding in and of itself, and there’s usually not an enormous difference between end-of-race rewards for first place and eighth place. This isn’t the case across every event, but over time it becomes clear that your ‘dream life’ can be enjoyed at whatever pace you want to live it. It took a while to settle into this new rhythm, and for the game to stop feeling smaller and less focused, than Forza Horizon 3 did, but ultimately this feels like a positive change. You’ll always feel like you’re doing something worthwhile in Horizon 4, even when you’re struggling. 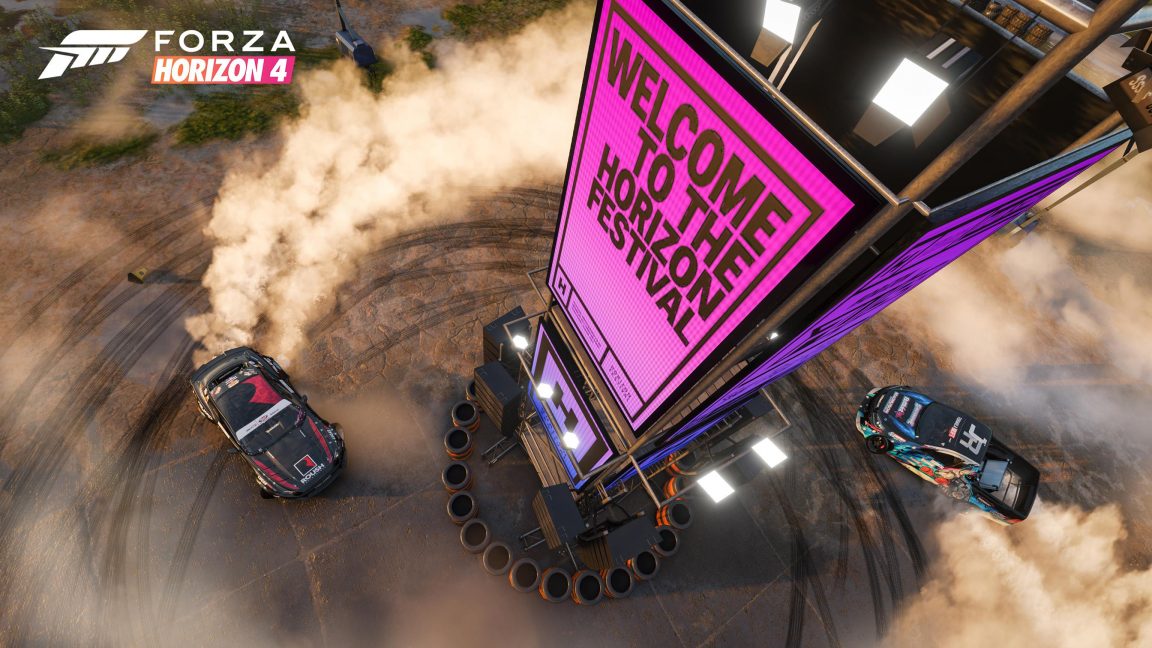 “Simply competing, putting time in, is rewarding in and of itself. There’s usually not an enormous difference between end-of-race rewards for first place and eighth place”

The map is scattered with events, and each racing discipline (cross-country, street, dirt, drag, road) can be levelled up individually. It’s not just races, either – you can level up as a photographer, a car tuner, a car collector, an artist, a ‘blueprint’ creator (Forza’s fantastic ‘make your own event’ function), and even on danger signs and speed zones. Everything you do has its own separate levelling system, and levelling them up, in turn, increases your ‘audience’ number, leading to further unlocks. Basically, you’re constantly rewarded for everything you do, although the overhauled ‘wheelspin’ system means that you’re often gifted new avatar clothes and car horns rather than the cars and credits you’ll crave.

The pacing is different, too. All five showcase events (big showy spectacle races against unlikely opponents, like a train or a jet of a Covenant dropship from Halo) are unlocked quickly, and there’s little fanfare for completing them. In fact, it’s not until you’ve reached the upper levels of a discipline or event style that you really need to start trying to win or do better to boost your level. Unlock the ‘big’ races in each discipline – for instance, a cross country race that covers half the map – is simply a matter of persistence. For my money, the game could benefit from more ‘get to X as fast as you can’ events – the heavy focus on checkpoints can feel like a waste when barrelling off-road is so much fun – but the driving is so fun, and the game so full of things to do, that it’s easy to forgive it for what few things it lacks.

The big gimmick for Horizon 4 is the new seasonal system, which sees the environment change every week as the in-game season shifts. In the opening few hours of the game, you’ll experience every season in quick succession before getting your Horizon pass and entering the festival proper, at which point the seasons will start changing weekly. Each change brings new seasonal challenges, barn finds (collectable cars hidden in the overworld), and events that need to be completed before the season changes over again. It’s been autumn for the entire review period, which means, strangely, that it’ll take most players a few weeks to experience the game as everyone reviewing it has. Which is a shame, because autumn is lovely, but it’ll be spring by the time most players get stuck in, which is perhaps even better. Winter is the harshest season, of course, and the one I’m most looking forward to getting more time with – my brief experience in the opening hours involved a lot of skidding and sliding (to be fair a lot of that was my own fault for choosing a Ferrari 512TR for a dirt racing series). Reckoning with that for a full week should be interesting.

Forza Horizon 4 is set in a truncated rendition of Britain, rendered here largely as a series of country roads broken up by small towns and farmsteads. The map is smaller than it was in Horizon 3, with only one Festival site (and a thankfully diminished focus on the Horizon Festival itself as a result), but there are actually more roads packed into the space. Britain was picked, one suspects, so that the game world could be filled with cobblestone walls to smash through – doing so never stops being satisfying, even when you’re fishtailing and the flying rocks are slowing you down (you can still press Y to rewind, thankfully). It also means we get yet another game where everyone drives on the left side of the road, which is a rare blessing. As you might expect from Forza, it looks phenomenally gorgeous, even when it’s dreary and drizzly (which is a lot of the time, regardless of season). In fact, even on my aging launch model Xbox One, it’s a noticeable improvement on Forza Horizon 3, thanks to its gorgeous weather effects.

There are other changes, most of them good, and there are probably things I’m yet to pick up on or find even after over twenty hours of playtime. Story mode has replaced bucket list challenges, presenting themed missions that unlock as you level up and which you can earn one, two, or three stars on. The rules dictating how many stars you can earn are opaquer than I would like, but all is forgiven once you hit the ten missions dedicated to recreating great moments from past racing games (there’s even a cheeky reference in here to the host of these events wanting to see Project Gotham Racing make a comeback – us too). 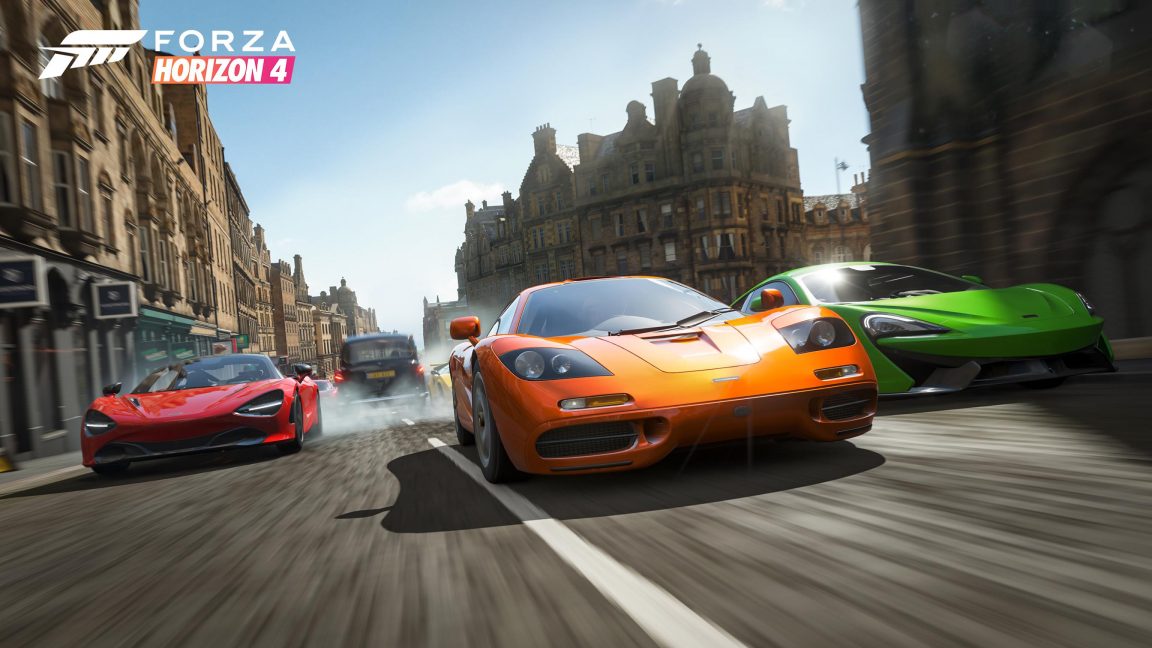 You’re in a synchronised shared world now, meaning that your game world will theoretically be occupied with other real drivers as you go about your business – during the review period, though, there weren’t enough players to really grasp what this will mean, beyond the occasional delight of seeing another player whip around a corner at high speed and the joy of racking up points alongside other players during a Forzathon Live Event (a lovely new addition that sees everyone in your game world competing to complete group objectives across a fifteen minute timespan).

There’s a thousand little touches that push the game that little bit further. The way soundtrack samples on the radio will dynamically loop during cutscenes to avoid awkward transitions, and how the radio cuts out entirely as you drive through tunnels; how there’s a distinctly readable difference between small trees that you can plow right through and large trees that will stop you in your tracks as you speed off-road; the extremely important addition of a ‘change car’ option in the pause menu. It’s a more chilled-out experience, in that you don’t feel any real pressure to hit specific goals – whatever you do while you play, there will be a tangible end-benefit to it. There are so many different events, and so much to do and find, but it never feels daunting unless you want to nail every weekly challenge and goal.

And ultimately, the game is likely to improve once everyone gets in there, and our clubs fill up, the online modes become populated, and there are more car tunes, photos, paint jobs, auctions, and blueprints being shared. For the past week, Forza Horizon 4 has felt like an excellent party where I’ve arrived an hour or two too early for – I’m extremely excited to see what the game will turn into once everyone else arrives.