In Red Dead Redemption 2, players will learn more about the Van der Linde gang and the events leading up to its demise.

The storyline in Red Dead Redemption 2 will center around the Van der Linde gang at the height of their notoriety.

Along the way, things will start to fall apart. This provides the player with a full background to the events which occurred 12 years prior to the original starring John Marston. Red Dead Redemption 2 is a prequel after all, as previously reported.

Rockstar Games said going back 12 years in the timeline will provide insight into Dutch van der Linde, the gang, and the events leading up to Marston seeking revenge. Rockstar posted artwork for each member of the Van der Linde gang yesterday along with biographies.  To get a better idea of who the characters are, you can look back over that post.

Part of the plot focuses on how modernization in the west changed the group’s way of life, and how it acted as a catalyst for fissures forming between gang members. All of this unfolds through the perspective, Arthur Morgan. Unlike Grand Theft Auto 5 and its multiple protagonists, Morgan will be the only playable character.

While the gist of the story in Red Dead Redemption 2 is already known, Rockstar provided added color to The Hollywood Reporter in a recent interview.

“Things are changing — there’s not much room in a rapidly modernizing world for the gang’s way of life,” Rockstar San Diego’s Josh Bass told The Hollywood Reporter. “Through Arthur’s eyes, you see events begin to take a toll on the gang as they are forced to flee across America, while at the same time, Dutch’s hold on the gang begins to slip.”

“We’ve aimed to capture a wide slice of American life in 1899, a rapidly industrializing nation that would soon have its sights on the world’s stage — and would do whatever possible to ‘modernize,'” added Rockstar North’s Aaron Garbut.

“It’s a brutal landscape with a sordid history, but also one that’s full of opportunity. One of the most satisfying aspects of creating a world of such scope and scale is the ability to experience a whole range of stories and characters in your journey across that world.

“The gang’s journey and the game’s epic scope makes room to touch on all aspects of turn of the century America in a meaningful, substantial way.”

Current-gen hardware also allowed Rockstar the ability to expand on the “epic scope,” and create a living, breathing world. Towns and homesteads alike feel alive, societal differences are evident, and the contrast between civilization and the wilderness is prominent.

“Red Dead Redemption 2 is our first game for the latest generation of hardware,” said Bass. “It was an opportunity for our teams to upgrade every single aspect of our approach to game design at once.

“We have used that power to create a world that goes far beyond anything we have ever done in terms of depth, interactivity and persistence.” 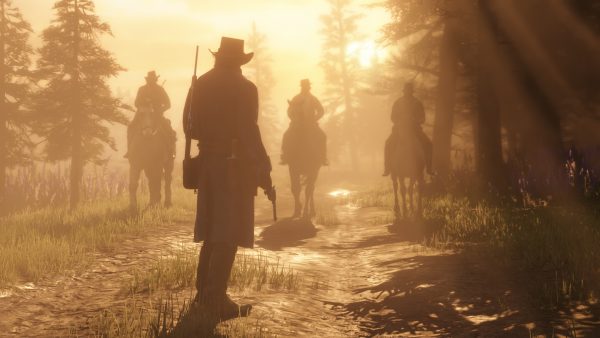 Its main goal with the story and the world, though, is making players “forget they are playing a game.”

“It’s the sense of life the game has that most sets it apart,” added Garbut. “When you first enter a town and you see the townspeople going about their business, you can instantly tell that we’ve never experienced this detail in an open world game before.

“Where you see a a shack on a hill and you know there is something interesting for you there, maybe you will break in and stumble onto a mystery, or meet the owner and end up getting tangled in something.

“I think that’s when you can tell that its new territory, when you are not even sure if what you’ve done was a mission or not. When all the systemic parts of the world come together with our scripted content in the right ways, it’s kind of incredible.”

You can read the entire interview with Bass and Garbut on The Hollywood Reporter.

Red Dead Redemption 2 releases October 26 for PS4 and Xbox One.

What to know more? Here’s everything there is to know about Red Dead Redemption 2 so far.