Star Wars Battlefront 2’s Han Solo season kicked off on May 16, and more content is expected next week on June 12.

Players will travel to Kessel to participate in several different game modes: Arcade, Blast, Hero Showdown, and Heroes vs Villains.

Extraction also returns, and on Kessel, Rebel players will need to escort shipments belonging to the Empire to their transport ship. Of course, the Empire has learned of the plan and is none too pleased.

In this instance, the Rebels will win should they escape with the shipment. If time runs out, the Empire will be victorious. Players will join as either attackers or defenders in the asymmetrical mode.

Extraction will also be available across the Jabba’s Palace map.

New Legendary Appearances will also be added next week to Star Wars Battlefront 2. Each are based around the characters in Solo: A Star Wars Story.

Finishing up the new Appearances for June will be Chewbacca with his Epic Vandor Heist look.

Lando’s Millennium Falcon will be added, and it’s faster and more agile than Han’s modified version from the original trilogy. That said, it is less resilient as it lacks the modifications made by Han.

The Millennium Falcon makes use of two, alternate firing laser cannons. The weapons deal medium damage over a medium range, but feature a high rate of fire. The ship will have three abilities, like all Starfighters. These are: Coaxium Injection, L3-37 Co-Pilot, and Synchronized Fire.

Lando’s Millennium Falcon will be available for Credits. 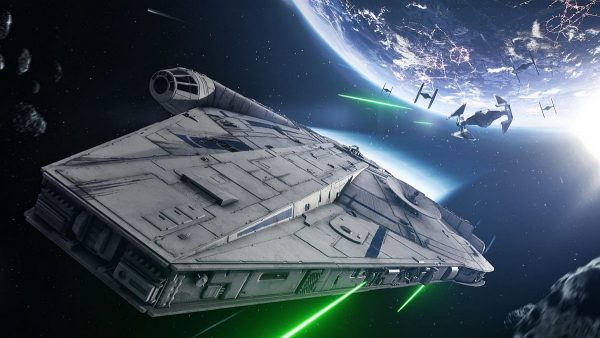 Jetpack Cargo is back with a six minute timer for each game. Its User Interface has been updated to display the score and time remaining. The map has also undergone some changes, with Bespin being replaced with Yavin 4.

When a player spawns, they will also no longer pick a character, instead the player will pick the weapon they wish to use.

The June update to the menu will also allow players to inspect character models through various directions.

Time Challenges have also been added to the front menu alongside crate notifications. Players can still navigate Challenges via the Career menu.

You can look over the full list of additions, features, tweaks and bug fixes in the notes below.

Again, the latest update to Han Solo season arrives next week on June 12 for PC, PlayStation 4, and Xbox One. 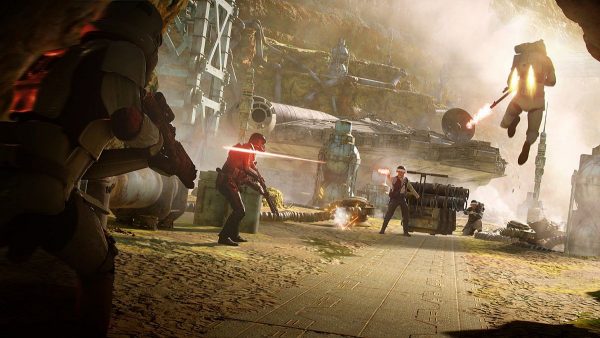 When looking at the Specialist, one thing to note is that the intended gameplay is not for players to sprint and fire. As such we’ve slightly increased the sprint recovery penalty with all Specialist primary weapons. This now means that a Specialist will be somewhat slower to fire the first shot with their primary weapon when coming out of sprint. This should also give other classes (except Heavy) a slight advantage when sprinting around a corner and suddenly meeting an enemy Specialist. For reference, the sprint recovery speeds are stack-ranked per weapon type as follows: