Bungie revealed Destiny 2: Forsaken during a livestream this afternoon.

Destiny 2: Forsaken will release September 4, according to information provided during today’s live announcement.

In the game, the Reef has fallen to lawlessness. Players and Cayde-6 are sent to “personally investigate the recent unrest.”

Upon arrival, players will discover those being held in the Prison of Elders have organized an escape. Going beyond the authority of the Vanguard, players will go after the fugitives who are hiding in the deepest parts of the Rift.

One of the new destinations in Forsaken is an area called The Dreaming City which will “evolve over time.” The area is “full of secrets to discover and bosses to defeat.”

The Dreaming City also features a new raid and is the first space designed “from the ground up to support endgame content.” The raid promises a greater number of bosses than prior raids.

Available to all Destiny 2 players around Forsaken’s launch will be the new weapon slot system, Random Rolls, improvements to the mods system, and numerous other quality-of-life improvements.

Players can expect nine new supers and new subclasses for Guardians. One new subclass is the Void Warlock which can teleport, and perform a rather interesting AoE attack. Each new subclass will feature its own path. Reddit user cannluke0 has posted some screens taken from the reveal of the new supers. You can look at those over on imgur.

A new weapon type is the bow, which will come alongside the new weapons system. There will be several types including long and short range.

Bungie also promises the new Mod System will be deeper, as will the updated Masterworks system which has been part of the roadmap for an extended period.

Destiny 2 players will also notice a new collections tab which is coming with Year 2 content. This will provide easy access to all gear items in the game players wish to track. Triumphs, which are making a return, will be located in the collections tab.

Bungie said more information on the story will be revealed at E3 2018 next week, and a Forsaken demo will also be playable at GuardianCon in Tampa, Florida the following week.

Along with Forsaken, Bungie outlined three additional content releases into 2019. Each will come alongside seasonal updates and live events, and are not considered expansions.

The development roadmap for Destiny 2 Year 2 is posted below. 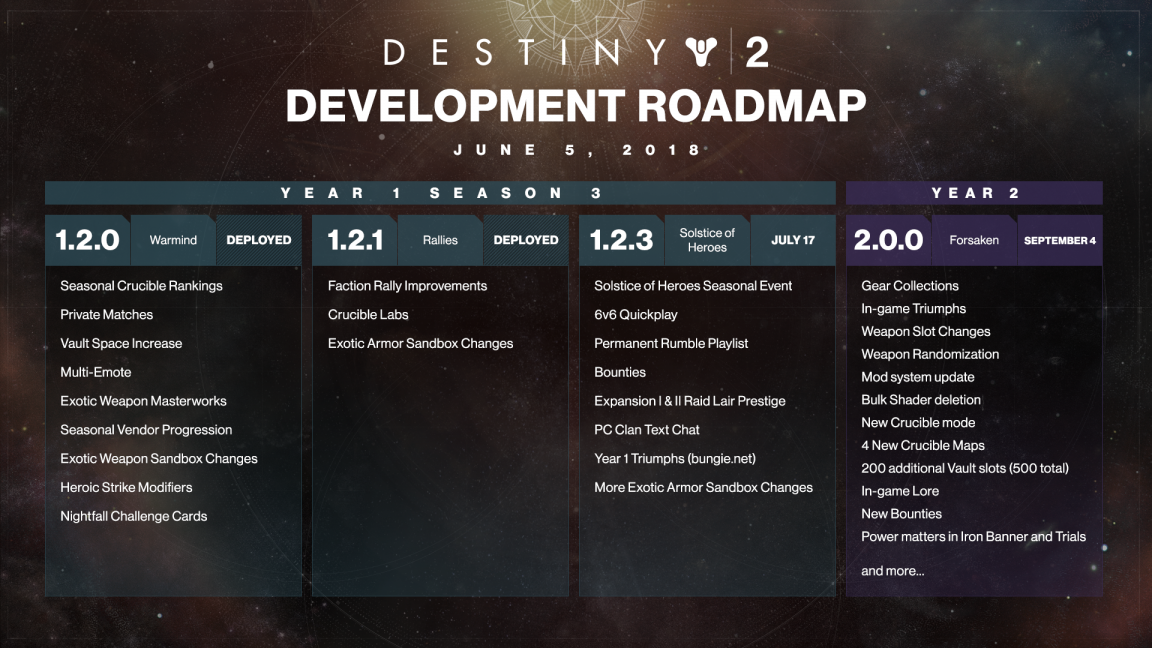 Destiny 2: Forsaken will be made available in three editions: standard ($39.99), the game plus the Annual Pass ($69.99), and the Digital Deluxe Edition.

The Annual Pass edition includes a copy of Destiny 2: Forsaken, premium digital content and the expansion pass. The Annual Pass includes seasonal updates and live events available to all Destiny 2 players, plus bonus rewards and the three content releases outlined above.

Those who purchase the Digital Deluxe Edition ($79.99) will receive a copy of Destiny 2: Forsaken, the Annual Pass, and the following premium digital content:

PlayStation 4 users will receive access to the following timed exclusive content: a strike, one gear set per class, a new ship and an exotic weapon.

At Destiny 2: Forsaken’s launch, the previously released Destiny 2 launch timed exclusives will be made available for all platforms.