I am sitting cross-legged in a watchtower, praying the crew searching for me doesn’t realise I’m here. One of my crewmates is sitting with me, holding the item these pirates are looking for: the Stronghold Key.

We acquired the key after a hard-fought battle with seemingly endless waves of skeletons, but a rival crew sank our docked ship just as we won. Our other two crewmembers logged off in frustration, but here we sit, cross-legged in a watchtower, the social interaction emote stopping our massive hats from giving us away.

The pair of us have a plan: wait for the pirates to sail away, grab a new boat, use the key to open the door, and load the booty aboard. We conspire in hushed voices, aware that positional voice chat could alert them.

Eventually, we see their ship sail away, so I dive into the water. A chunk of my health disappears almost immediately, my screen flashing red. Is it a shark? No. It’s one of those bloody pirates swimming at me with a cutlass. I react quickly, shooting him in his eyepatch and causing him to float lifelessly to the surface. 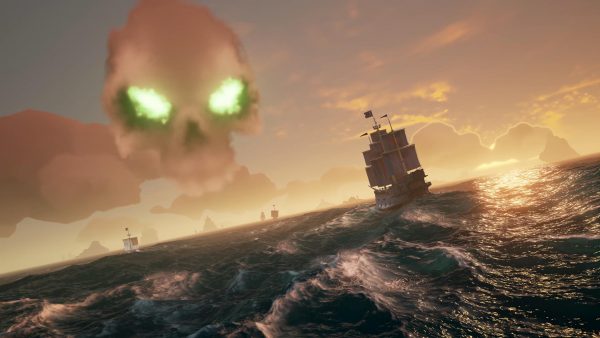 I swim to a nearby mermaid knowing the creature will teleport me to a new ship. It does. Our vessel, The Salty Chicken, spawns docked at the stronghold island, but the other crew has circled back around and they are already boarding me – my ship is scuttled and I’m cut down. “I don’t even have anything to steal, guys,” I lie, even as their cutlasses puncture holes in my abdomen. “The ship you sank had everything we own on it.”

When I respawn, I’m the other side of the map. Suddenly, a notification pops through the Xbox app on my PC – my crewmate sent a friend request. I accept it and invite him to party chat so we can figure out how to get to him. Then it’s a not-so-simple case of navigating a four-man galleon on my own, managing the sails, the wheel, and, I hope, keeping the right course.

Alone, I battle through stormy seas when my crewmate’s voice comes over comms once again. He is peeking through his eyeglass – I can see its glint from the watchtower. “Is that you?” he says excitedly. “Oh my god, we did it.”

After docking, we head to the stronghold together and open the door. Inside there are around four chests, four crates of silk, tea, and spices, three skulls, and a handful of trinkets. It takes us about ten trips each to load the entire haul onto our boat. Then we sail to the nearest outpost together to trade it all in, praying we aren’t attacked by pirates.

It goes off without a hitch and we walk away 13,000 gold and a new Xbox Live friend richer. 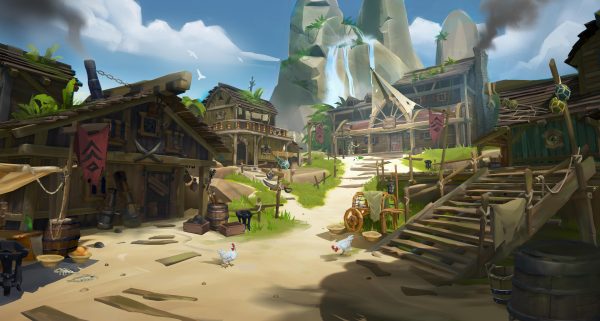 Sea of Thieves is all about these experiences. We hear the term ‘anecdote generator’ a lot these days, as video game developers get wise to the potential of the emergent game. Sea of Thieves is one of the purest distillations of this concept I’ve seen. Anecdotes are the entire game. In fact, there isn’t much outside of them.

It is strange. One minute you are having the best multiplayer video game experience of your life, and the next you are wondering to yourself, “Is this it?”

As well as these skeleton strongholds – which are the game’s take on an MMO raid – there are three other curated mission types to tackle: you dig up lost treasure for the Gold Hoarders; you capture chickens, pigs, and snakes for the Merchant Alliance; or you kill powerful skeletons for the Order of Souls.

The only things you ever fight are different types of skeletons, sharks, players, and the Kraken, which appears randomly at sea and is literally just some tentacles that only exist above the water’s surface. 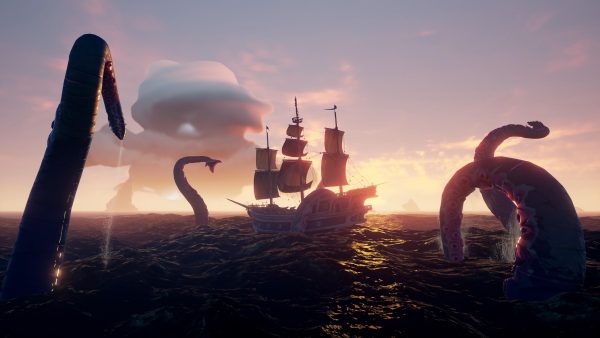 The Kraken is a good metaphor for the game in that sense – Sea of Thieves appears to offer an ocean of possibility, but there is nothing below the surface. You fill progress bars for each of the factions by trading in items that you secure on a voyage, and sometimes other players get in the way. The only reward for doing any of it is different skins for your character, your ship, or your equipment. There’s very little, if any, sense of progression – all the fun comes from the people you play with.

It’s also shaky technically: I’ve witnessed strange visual bugs such as flying skeletons; NPCs and islands that refuse to load in for ten minutes, leaving me stranded on the boat waiting for textures to load; and there have been long periods of server downtime since launch.

Luckily, both progression and performance issues can be tweaked in updates. This is the first service game developer Rare has created – it will evolve and improve over time. I imagine Sea of Thieves will be the experience everyone expected it to be at some point, but its sails are currently at half mast.

Sailing across its open-world as the most convincing virtual waters I’ve seen lap against your ship’s hull and the orange sun sets on the horizon, you can almost taste its potential. So much love has gone into the moment-to-moment experience, in forcing players to work together to angle the sails into the wind, to drop anchor at the right time, to bale out water when your hull takes a hit, to navigate, and to sail.

Likewise, every tool in your inventory is created to serve as a prop for improv comedy, whether you are jamming in an impromptu concertina and hurdy-gurdy session, drinking grog together and spewing on each other’s shoes, or firing your friends out of a cannon. If games were scored on ‘laughs per minute’, this would be a 10/10.

Sea of Thieves just needs more. It needs more ways to play, more mission variety, more enemy variants than just different coloured skeletons, and more meaningful progression. If these things don’t appear soon, I can see player numbers dropping off substantially after a short while. When it is the players themselves that create the game’s standout moments, potential player drop-off is a huge problem.