Assassin’s Creed Origins introduces timed events, and the first one has left many players disappointed – and after glancing at the microtransaction store, more than a little angry.

Assassin’s Creed Origins is an excellent game, but we live in the bold new future where being a terrific single-player title isn’t enough.

Ubisoft’s recent financials saw add-ons and microtransactions make up more than half of its total digital revenue for the first time ever, and that’s a modest statistic compared to the numbers we saw from Take Two and EA. Of course Ubisoft is going to try and make its enormously expensive flagship franchise hang around in console disc trays, where players will be tempted to make extra purchases for it.

Assassin’s Creed Origins doesn’t really lend itself to the games as service model, but free content updates and regular timed events are a great way to keep bums in seats, as it were. As well as free costumes, mounts and weapons, Ubisoft has introduced Trials of the Gods, a series of four boss battles which stay open for a few days at a time, each drop unique loot, and can reward players with yet more unique loot if they manage to complete all four. 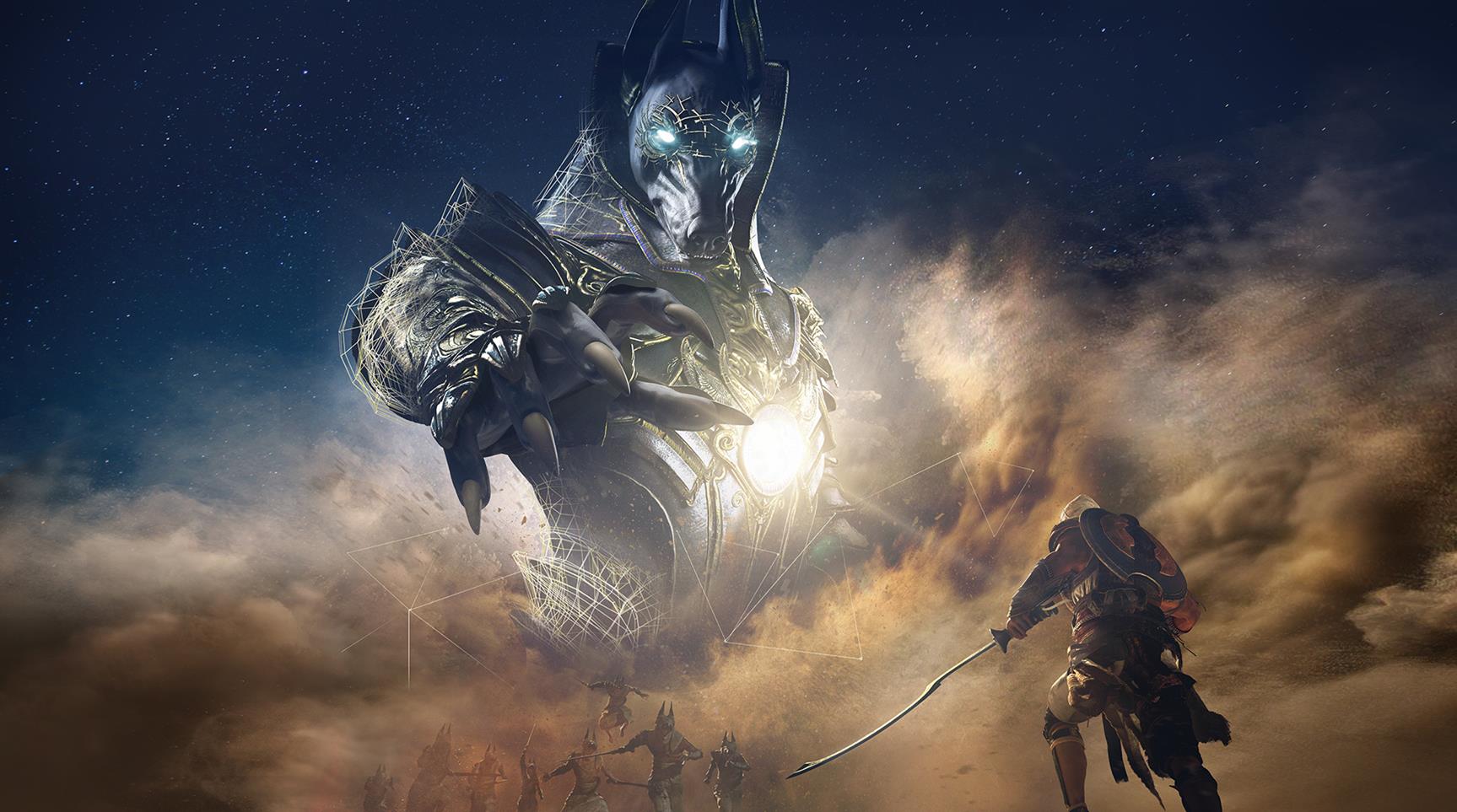 The first Trials of the Gods kicked off last week, and beating Anubis is one of the coolest bits in Assassin’s Creed Origins.

So far, so good; Hitman adopted a similar approach and it worked very well. The difference is that the only thing standing between the player and successfully competing an Elusive Target was skill. Assassin’s Creed Origins, as Ubisoft went to great pains to communicate, has RPG elements, and if you want to face off against Anubis this weekend, you needed to be up to snuff.

It’s not impossible to defeat Anubis if you’re under-levelled or under-equipped but the difficulty gap grows in a way that feels exponential to every missed level. My level 40 Bayek, geared up to the nines and with a good two dozen extra ability points under his belt, got through it first time. I wouldn’t describe myself as a particularly skilful player; it was just that I could take a number of hits before losing a health segment, recoup lost health with my endgame equipment, and whack off reasonable slices of the boss’s HP at a time. I think it took me under 10 minutes.

Meanwhile, I watched a stream over the weekend in which an extremely skilled player suffered through a good 45 minutes of avoiding instant death attacks, chipping away at Anubis in painfully small bites, only to die in the second to last phase – not from an error, really, but just bad luck. He was level 30.

My Bayek is overpowered because I have put a ridiculous number of hours into Assassin’s Creed Origins over the past few weeks. I had review code a few days before release. I was able to justify playing it for significant slices of my working day. But even then I also gave up a lot of my free time and sleep to it, because I knew I needed to be right up in endgame so I could engage with and write about timed events like Trials of the Gods, which has a recommended level of 40.

I don’t think it’s fair for Ubisoft to expect other players to have put in the time I have. Except for really hardcore uber fans willing to give up other activities or people who just have no other commitments outside gaming, getting to level 40 in finishing Assassin’s Creed Origins in three weeks is an enormous ask. And yet, if you want to tackle Anubis and want it to be anything but an enormously frustrating and thankless endeavour, you’d have to have rushed through the game, ignoring the spectacular beauty and atmosphere, in order to gather as much XP as you can. Didn’t do that? Have two jobs, a family, studies, chores, hospital appointments that precluded it? Too bad, you miss out.

Or – and this, I think, is the bit that makes us all a bit annoyed – you can shortcut your way to endgame by buying one of Ubisoft’s Time Saver add-ons. These packs range from crafting materials to ability points to drachmae (which can be used to buy XP in endgame, as it happens), and if you throw enough Helix Points at the Assassin’s Creed Origins store you can “save” yourself a great deal of time indeed. 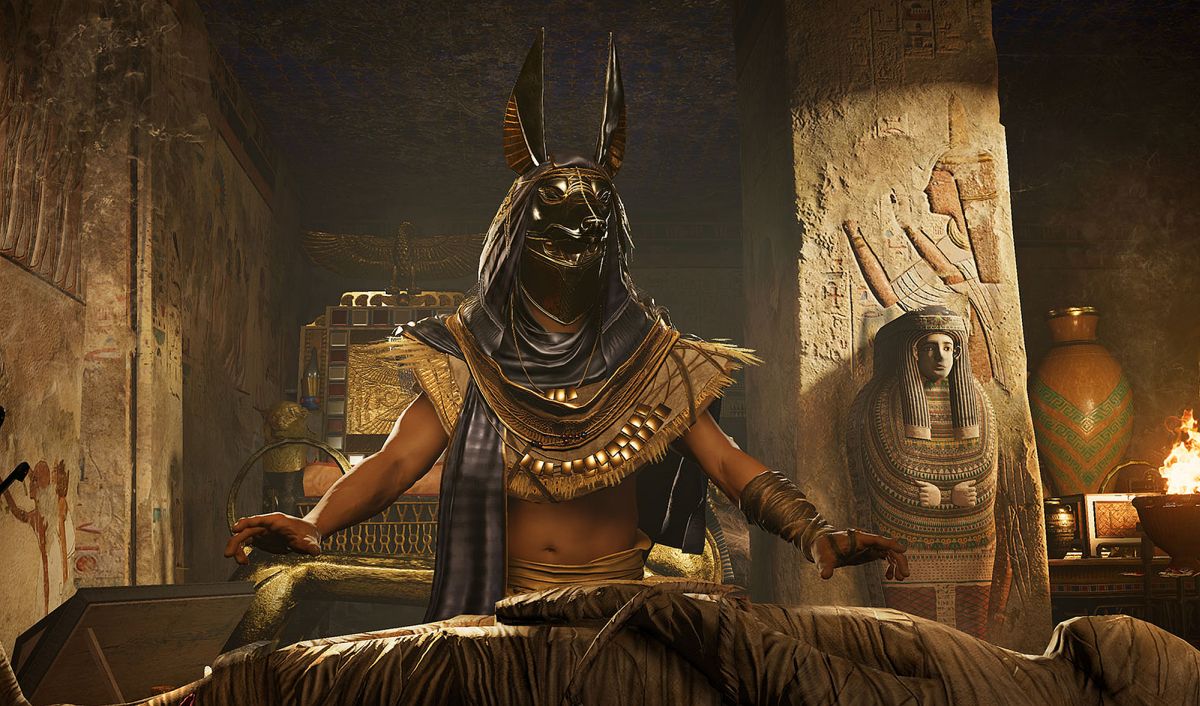 As tempting as it is to vilify Ubisoft here and imagine some executive deciding to schedule Trials of the Gods in week three so that y’all have to dish out cash or miss out on whatever virtual goods it is forever* (yeah no it’s almost certainly not actually forever, hey), I suspect it has a pretty good idea of how long it takes the most eager players to absolutely spank an Assassin’s Creed game, and aligned the stars accordingly. I am absolutely certain someone somewhere had already ejected the disc, complaining that it was over already, and started thinking about how little GameStop credit they were going to get. Trials of the Gods arrived just in time for these content locusts.

Nevertheless, whatever the justification for it, setting the entry bar on a timed event so high, so soon, in such an enormous freaking game, is unkind. Of course the Anubis gear is just some random add-on and nobody really needs it (not that years of psychological manipulation and programming by video games makes that difficult to accept), but the boss fight itself is spectacular fun at the right level, and to be locked out of that fun factor must feel awful.

To be locked out and to know you could buy your way in – ugh. That’s not great, is it?