Marvel vs Capcom: Infinite’s release is only a couple of weeks away, which means you have plenty of time to pre-order if you want some extra costumes.

Those who pre-order Marvel vs Capcom: Infinite before it releases on September 19 will be handed extra costumes for their trouble.

As previously reported, pre-orders of the game, depending upon the edition, will include premium costumes.

Warrior Thor and Evil Ryu are included in the standard edition pre-order, and the Deluxe Edition includes these costumes along with two others: Gladiator Hulk and Command Mission X.

All can be seen in the video, and an even better look is provided with the image.

A 2017 Character Pass will be available for the game containing access to six additional post-launch characters. At present, these characters haven’t been announced, but datamining suggests Marvel’s Ant-Man, Venom, and Winter Soldier will be released down the road.

It’s also rumored a Monster Hunter will make an appearance as a DLC character. You can look over the entire roster of confirmed Marvel vs Capcom: Infinite characters through the link there if you wish. 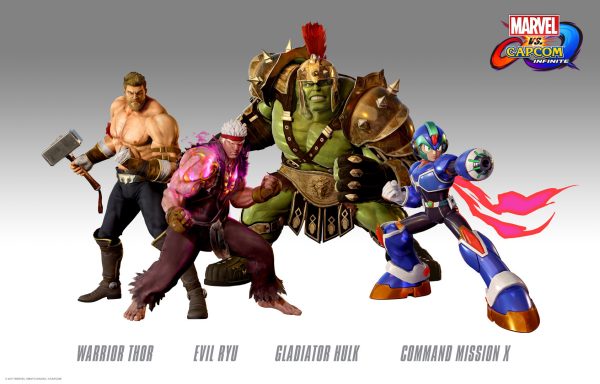 Announced at PSX 2016, Marvel vs Capcom: Infinite includes single-player Arcade, Training and Mission modes, multiplayer, and a Story Mode which takes place in the “center of both universes” where both heroes and villains will battle Ultron Sigma.

Upon release, you can pick it up for either PlayStation 4 or Xbox One.