The PlayStation 4 system software update 5.0 beta is rolling out today, and Sony has provided information on what’s included.

Beta applications for PS4 firmware 5.0 were taken in July, and just last week, the contents of the beta were acquired early by Eurogamer.

Not much in the way of new information was provided than what was revealed last week, but there are extra details.

As noted below, firmware update 5.0 introduces Family Accounts, friend management, new features for broadcast, notifications, messages and other additions. We’ve posted the notes for you below straight from Sony.

When the update is live, it will make it easier to set up PSN accounts for children and customize parental control settings for each user. 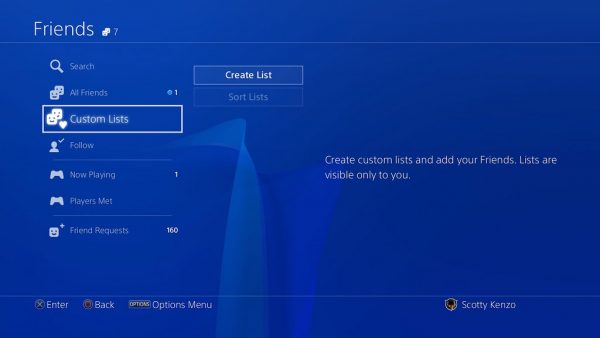 The Favorite Groups tab will be replaced by a tab called Custom List on the Friends screen. Here, users can create and edit custom lists of friends when can be arranged into specific groups. These can be based on games played or groups such as teammates, or just friends in general. Game invites can be sent to groups as well.

Music can already be shared on PS4 using Twitter and Facebook via Spotify and PlayStation Music, but once the update is applied, individual tracks can be shared by sending a message on message on PS4. Shared tracks can be listened to directly from the message or through the Spotify app from the PS Messages app on mobile and added to a playlist.

New setting allows the user to disable pop-up notifications while watching a movie or TV show on PS4. This setting is set to off by default but can be enabled if the user wishes. The update allows for turning off message previews on pop-up notifications. Turning the setting off the pop-up notification will hide the message senders’ online ID showing a generic user icon and message instead. The pop-up color can also be changed from white to black.

Quick Menu updates: The Notifications tab, which shows download progress or new invitations, can now be accessed directly from the Quick Menu without leaving a game. A Leave Party option has also been added to Quick Menu.

Those who were chosen to participate in the PS4 firmware 5.0 beta should receive an email with instructions on how to download the update and get started.