Want Payday 2 for free? Then log into Steam now. 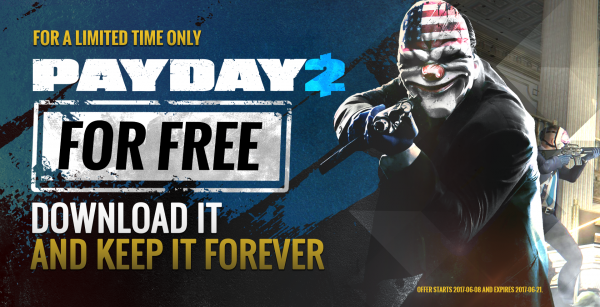 Starbreeze announced that the first 5 million people who click the Install Now button on the game page will be handed Payday 2 free for life.

You don’t even need to install it right away. Just clicking the install button will add the game to your library.

Obviously, it’s just the base game. No DLC included because left Steam to prepare for Payday 2: Ultimate Edition. The devs explain that part a bit more in this video.

The game will run you $45, but if you already own Payday 2, more information will be available regarding upgrade options when the Ultimate Edition is released.

Just think, though: that is so much cheaper than if you bought all 47 pieces of Payday 2 DLC separately. Instead of paying hundreds of dollars, you will only be paying $45 ($1 a piece if you break it down) for the entire lot.

In the meantime, if you want the core game, hurry because 5 million free game codes probably won’t last long. You have until June 21.