Dreamfall Chapters is the end of a story, but it’s worthwhile getting on board at the last station of this long journey. 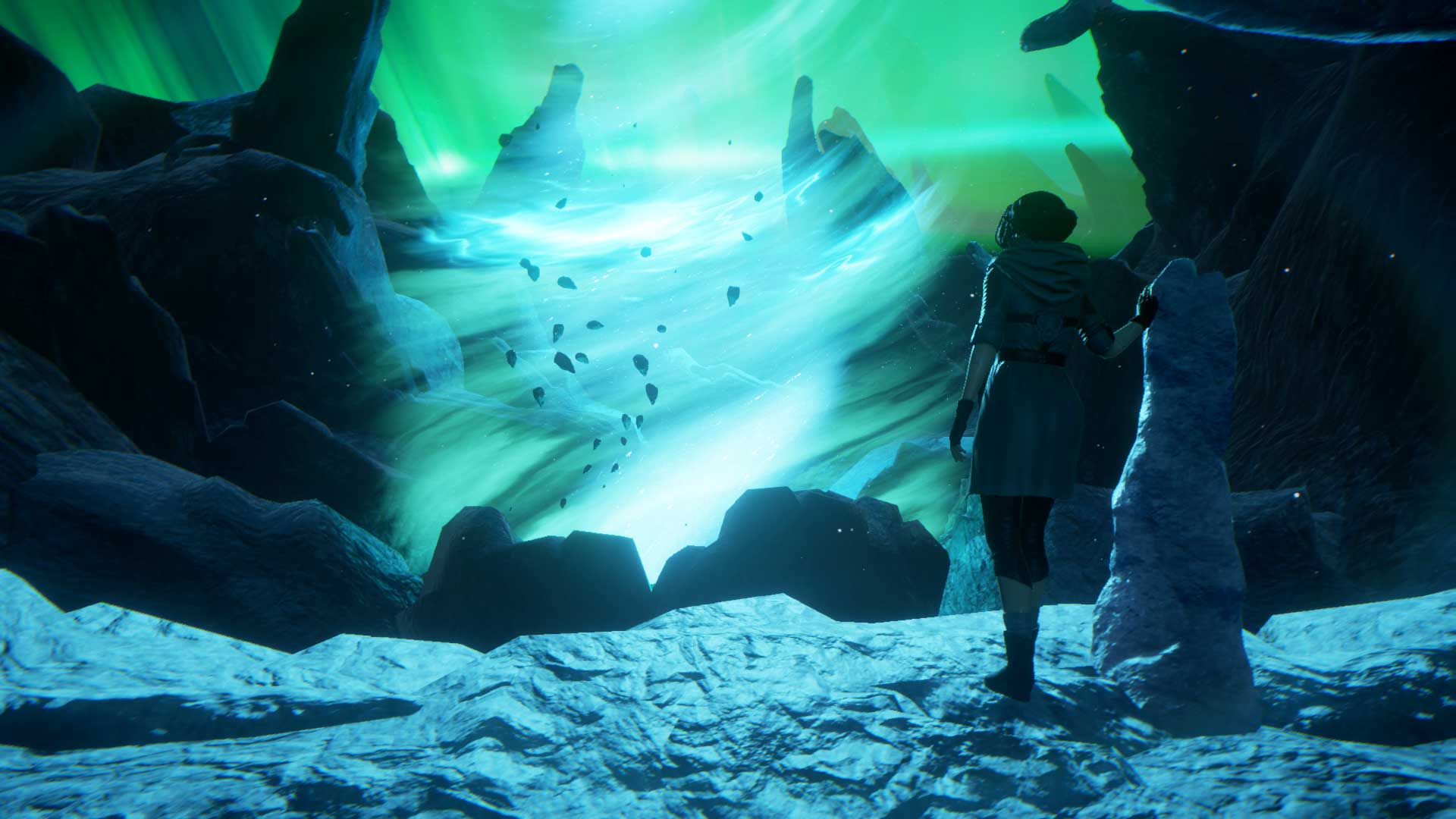 Starting Dreamfall Chapters feels a lot like being dropped down in the middle of a story, where everyone knows what’s going on except you.

It feels like that because that’s what’s happening: although it holds up as a standalone work, Dreamfall Chapters is the long-awaited conclusion to The Longest Journey, a series of two cult-favourite point-and-click adventures from Norwegian developer Funcom and creative lead Ragnar Tørnquist. If, like me, this is your first visit to the world, you’re coming in without years of background plot, speculation and anticipation. 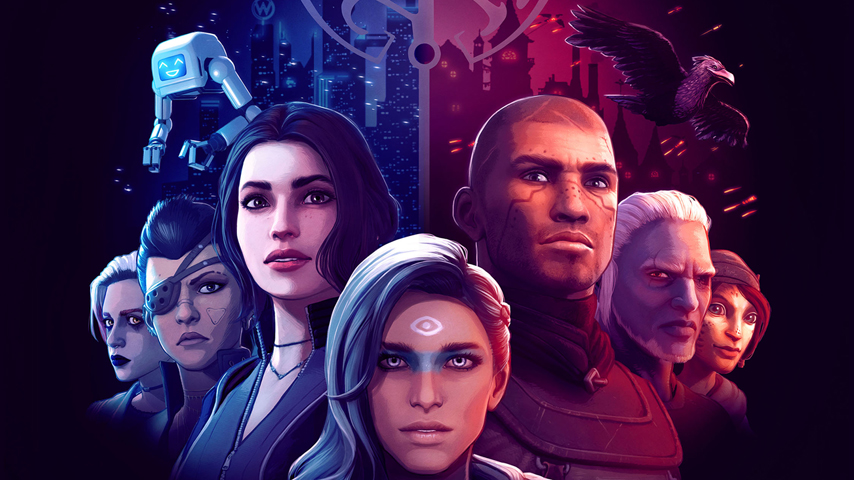 Released episodically from October 2014, then in Final Cut form in May 2017. Available on disc (PS4, Xbox One) or digitally (Linux, Mac, PC).

First episodes developed and released on Unity 4, then upgraded to Unity 5 partway through production.

This isn’t a bad thing, but even if it were, Dreamfall Chapters does a pretty good job of ensuring lack of familiarity doesn’t matter much. There’s a story recap and a character journal to catch you up, but they’re unnecessary; you’re given all the information you need regarding the immediate circumstances each of the three playable characters find themselves in at the start of the game. Everything else you need to get invested in the plot flows from these starting points, via events and dialogue. The backstory is just a bonus.

Not everything is explicitly explained, though, whether you go hunting for it or not, and not everyone is going to find Red Thread’s hands-off approach to wordbuilding and story-telling to their taste. This is a game for players who are used to putting together the strands of fantasy trope and mythology, to joining the dots of story and character independently – an audience under-served by an industry that refuses to leave anybody behind if it can just explain everything away with a cutscene instead.

If you can handle the lack of exposition, Dreamfall Chapters rarely disappoints. I found the opening chapter a little hard to take, moving as it does between the dramatic events in Kian’s world and the slower, more exploratory and investigative adventure Zoe’s on, but once I had a few episodes under my belt I was carried away by events. 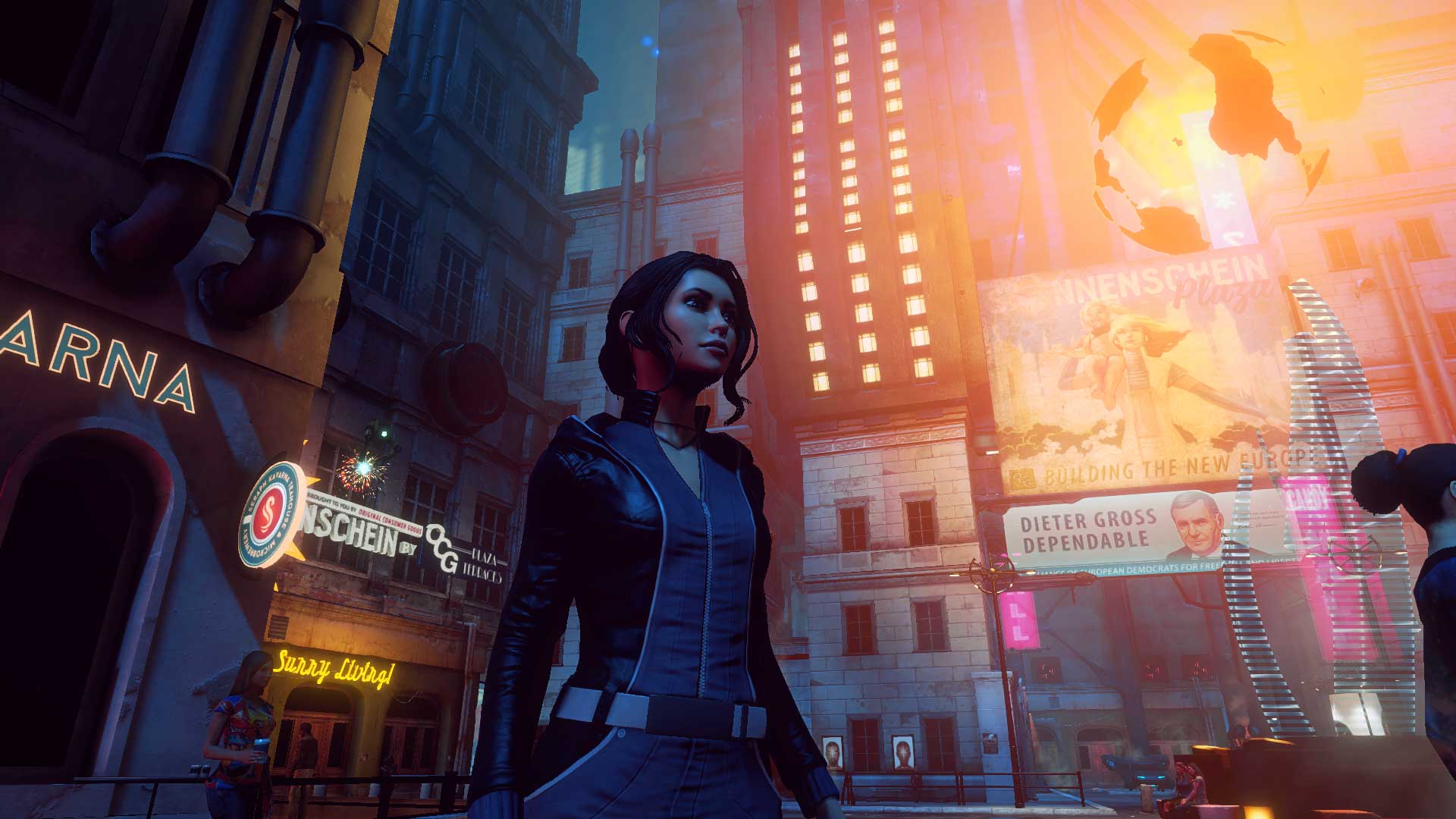 It’s not that the sci-fi fantasy story is that groundbreaking or inventive, although I did enjoy it a lot – but rather that I really came to like and care about the characters. The protagonists and NPCs in Dreamfall Chapters don’t feel constructed, the way video game characters so often do. They don’t feel like you’re supposed to like them; they feel like their creators liked them, and bugger the rest of us. That means there are characters that may grate on you – Enu’s verbal diarrhoea, perhaps, or Mira’s determinedly hostile vernacular, both of which I personally loved – but are way more interesting than the cookie cutter Tough One, Smart One and Sarcastic One video games so often give us.

A few hours in, it made no difference that I had only the most vaguest idea of who April Ryan was and why she mattered: I knew that she mattered to people who mattered to me (and I knew why she mattered to them, and it wasn’t the typical video game “because she’s my wife and now she’s going in the refrigerator” style of thing, either) – and that was enough. I didn’t care that I had only a slight comprehension of the mythology of dragons and songlines and shifting and whatever, because I had walked around Stark and Arcadia, and I cared about those worlds because I liked the people living in them. I liked the tone of Dreamfall Chapters so much I found myself clicking on things just to hear what characters said about them – and I’m a shameless dialogue skipper, even in games I really like.

There were very few moments in Dreamfall Chapters were I found the humour forced or the characters unrelatable, although I understand a good number of fans lost their shit over a certain revelation about one of the protagonists. It made perfect sense to me personally, but then Zoe’s apparently popular epilogue put me all out of charity with her – horses for courses, innit. 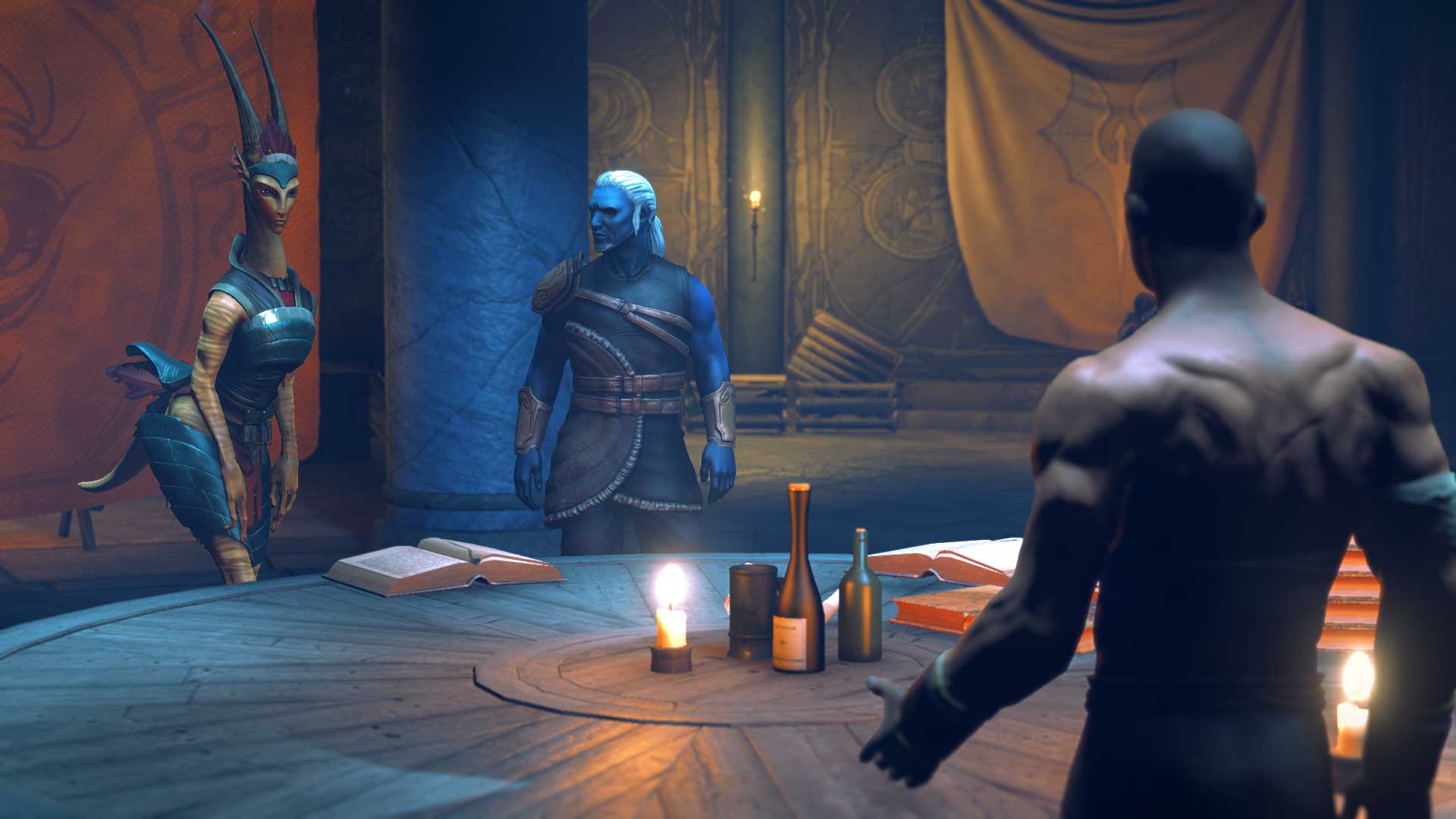 But whether the writing and stories sit well for you or not, Dreamfall Chapters is still a great deal of fun both for some amazing moments of drama and fantasy (like when you go to that place, and meet that person, and – well, I won’t spoil anything) and for the consequential choice system.

I feel like I’m always banging on about consequential choices these days; it’s really come into fashion as a way to give players a feeling of agency and immersion in a game world. It’s also really easy to do wrong, apparently, as with Mass Effect Andromeda’s meaningless decisions. BioWare’s intent there seems to have been to disguise the branching of the story so you wouldn’t metagame it, but it did this by minimising the branches to the point of insignificance, making your choices feel hollow. 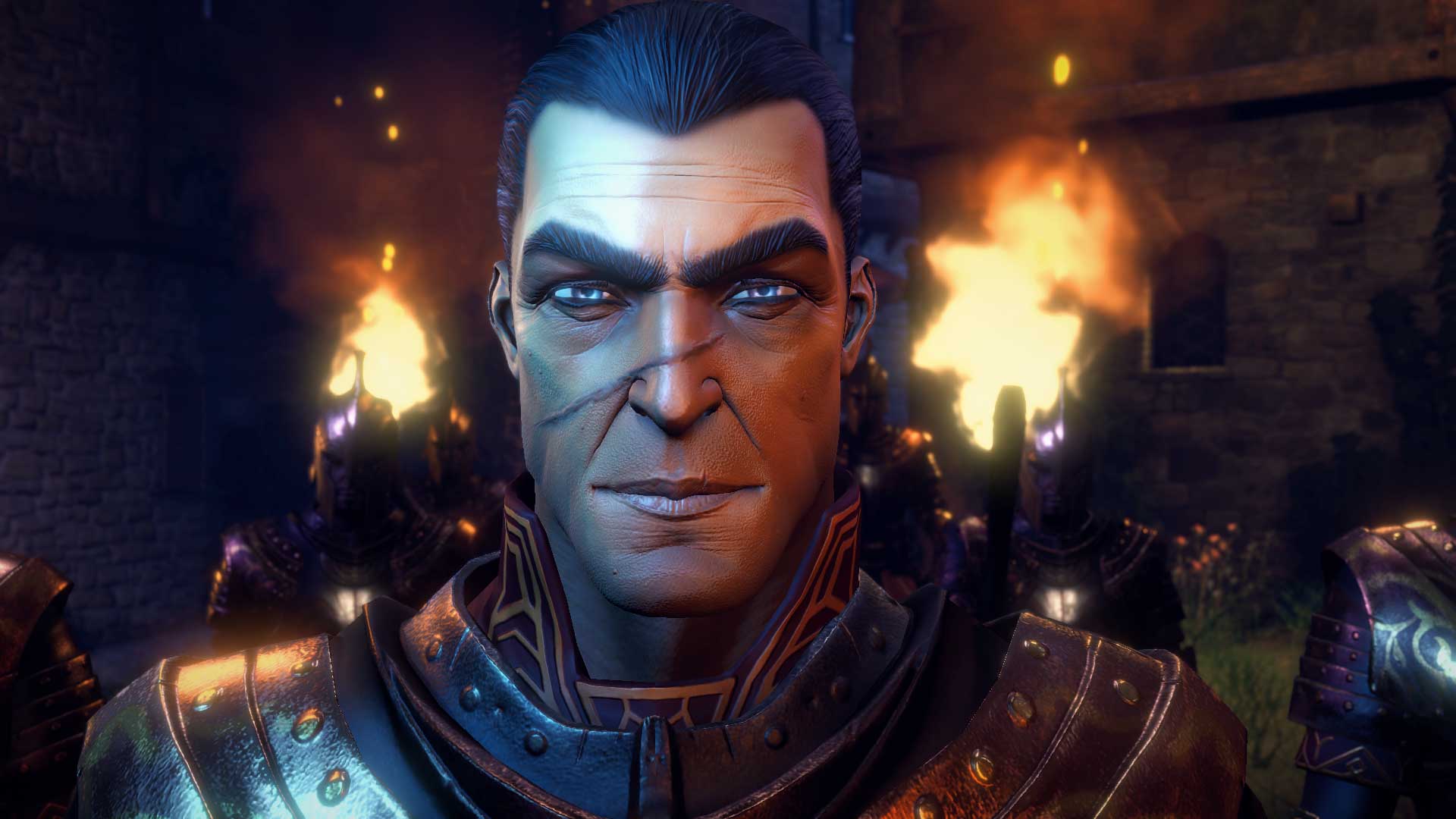 Red Thread went the complete opposite direction, and it’s great. Tying in with the setting’s mythology, which includes a universal force called the Balance, Dreamfall Chapters explicitly communicates when a choice is going to have consequences, and celebrates your decisions with a warning that “the Balance has shifted”. Carrying it further, Red Thread allows you to see what other players have chosen as you make your decision, summarises your choices at the end of an episode with a hint at when you’ll see it bear fruit, and flashes an icon on screen to let you know when a choice you’ve made has brought about the current situation.

Like most games of this kind, the actual divergence of your gameplay experience isn’t huge in terms of the overall plot, but there are definite instances of characters living and dying, among other impactful consequences. But whether the story of a Dreamfall Chapters playthrough is totally unique or mostly railroaded, it feels like what you said and did mattered. The systems Red Thread employed may be very meta-game, but they also do a great job of presenting (the illusion of?) contingencies. 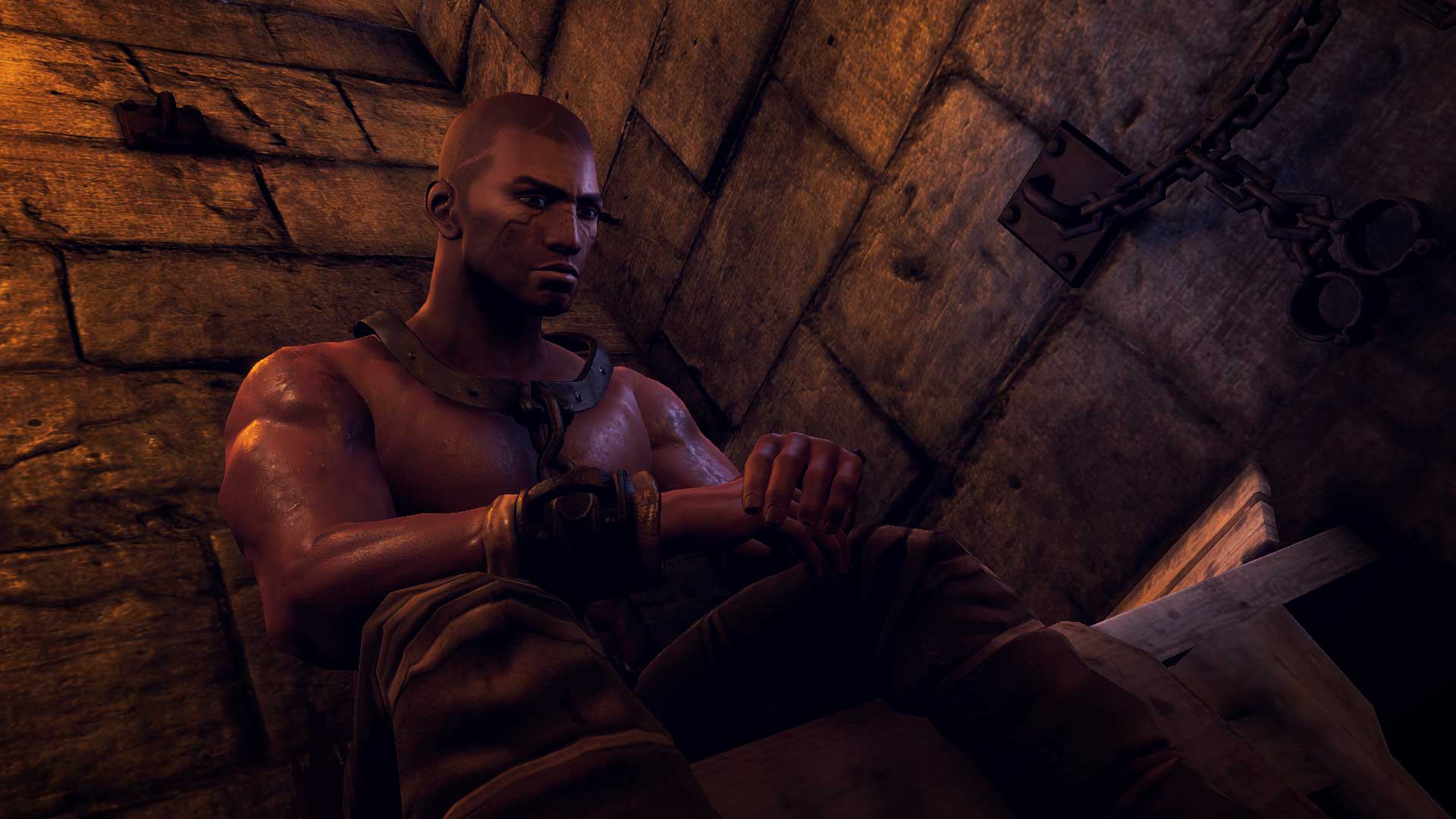 I should say that for the most part Dreamfall Chapters avoids the frustrations of puzzle adventure gaming, and has handled the transition to console and control pad pretty well. There’s a cursor you control with the camera stick, which is generally invisible until you approach interactive objects, and you can zoom in with a trigger for more precision. Since Dreamfall Chapters keeps away from the pixel-hunting style of adventures and generally makes it clear what objects are interactive and which are not, this works really well about 90% of the time.

As for the other 10%: there were two instances where I struggled to make the cursor select what I wanted, a couple of quicktime-style events which seemed very hard to do with the pad, and one late game navigation section where getting the cursor to acknowledge any interactive objects at all is super fiddly and the correct path is far from obvious. Apart from that, puzzles flowed fairly logically and with plenty of clues if I became so confused even the game noticed.

Thanks to the consequential choice system, the likeable characters and the accessibility of the established world and plot, by the end of Dreamfall Chapters I was so invested in the stories of Zoe, Kian and Saga that I felt as if I too had experienced The Longest Journey and its first sequel. The neat, tied-together conclusion to these stories delighted me, and felt very on-theme, even though I could feel the gaps in my knowledge of what made it so special – and the even larger gaps left by Red Thread’s decision to wrap up the whole story of this world in a couple of epilogue scenes, rather than the additional games it had been planning on. (Although…)

To bring new players in at the end of project and make them care about it is an impressive story-telling feat in any medium, let alone one as player-dependent as video games. I’m impressed. I want to go back and play the first two Longest Journey games. I get it, now. I get why Tørnquist’s name is such a thing.