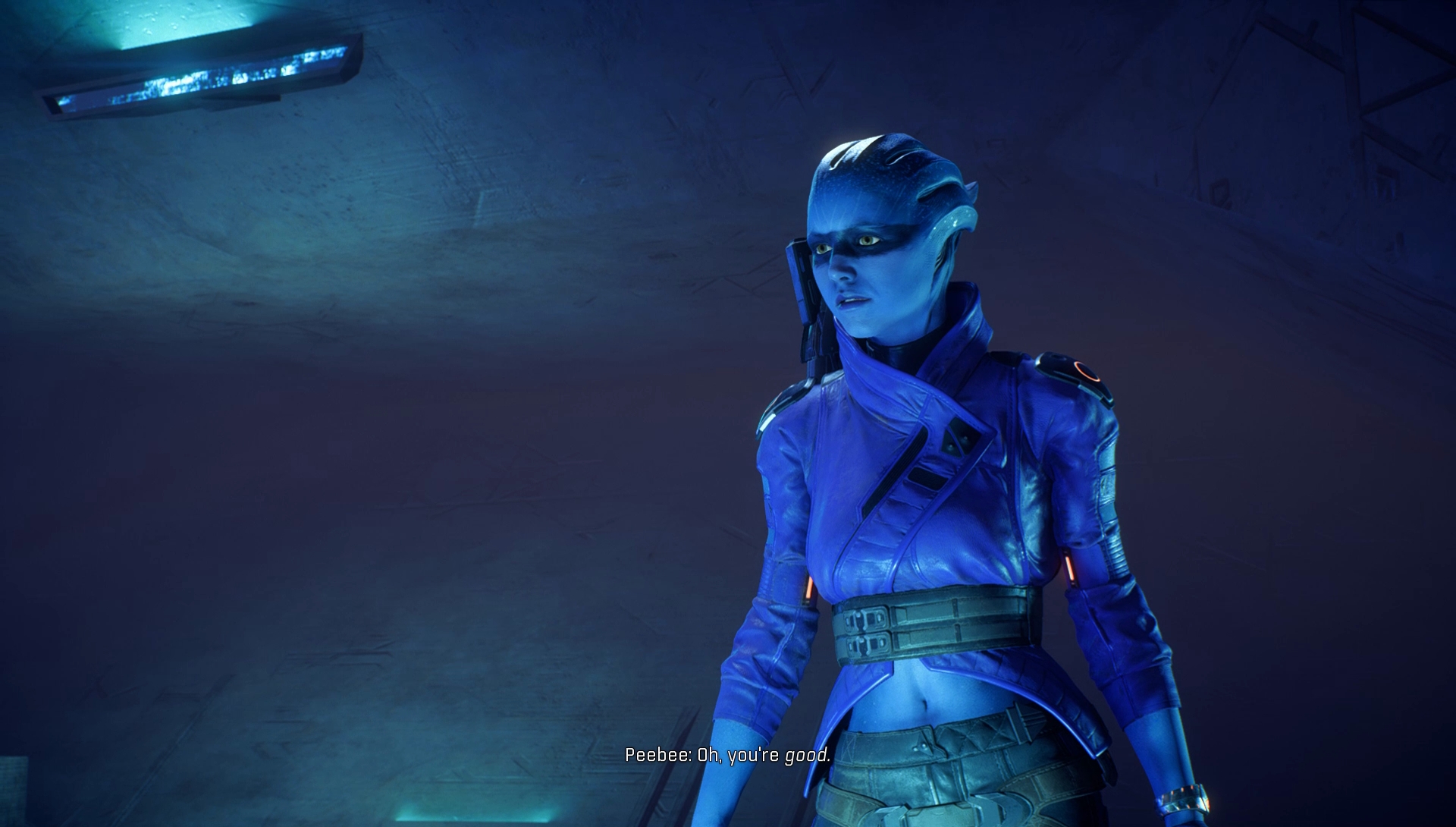 Inside the Eos Remnant Vault – A Better Beginning

After activating all the Remnant Monoliths, the Eos vault is activated. The navpoint guides you to the middle of the lake that dominates this portion of the Eos map.

Every landable planet on Mass Effect Andromeda has a vault; they’re the map’s major dungeon. Inside you can expect to battle Remnant, solve environmental puzzles and collect some tasty loot as you work your way towards activating the alien technology inside. Not every vault is part of critical path questline, but all of them contribute to planetary viability and many touch on major side quests.

Here on Eos, you can reach the vault either by fast travelling to a nearby forward station (you should’ve dropped a few by now) or by driving there using the Nomad. If you just got done with meeting Drack and powering up the last monolith it really isn’t very far, and along the way you might discover some small combat encounters with Kett or Remnant that’ll offer up a little extra EXP and loot boxes.

When you get there it looks hopeless – there’s a big gap between you and the newly-opened bunker-type structure. But… approach the edge, as if you’re ready to drive into the lake.

A bridge forms up in front of you as you drive. An invitation, of sorts. Head on over. Here you’ll meet up with Peebee and see some cutscenes – if you want to perform the narrative action with RT/R2 here you can, it has no ill effects – you just look like a slightly reckless badass. 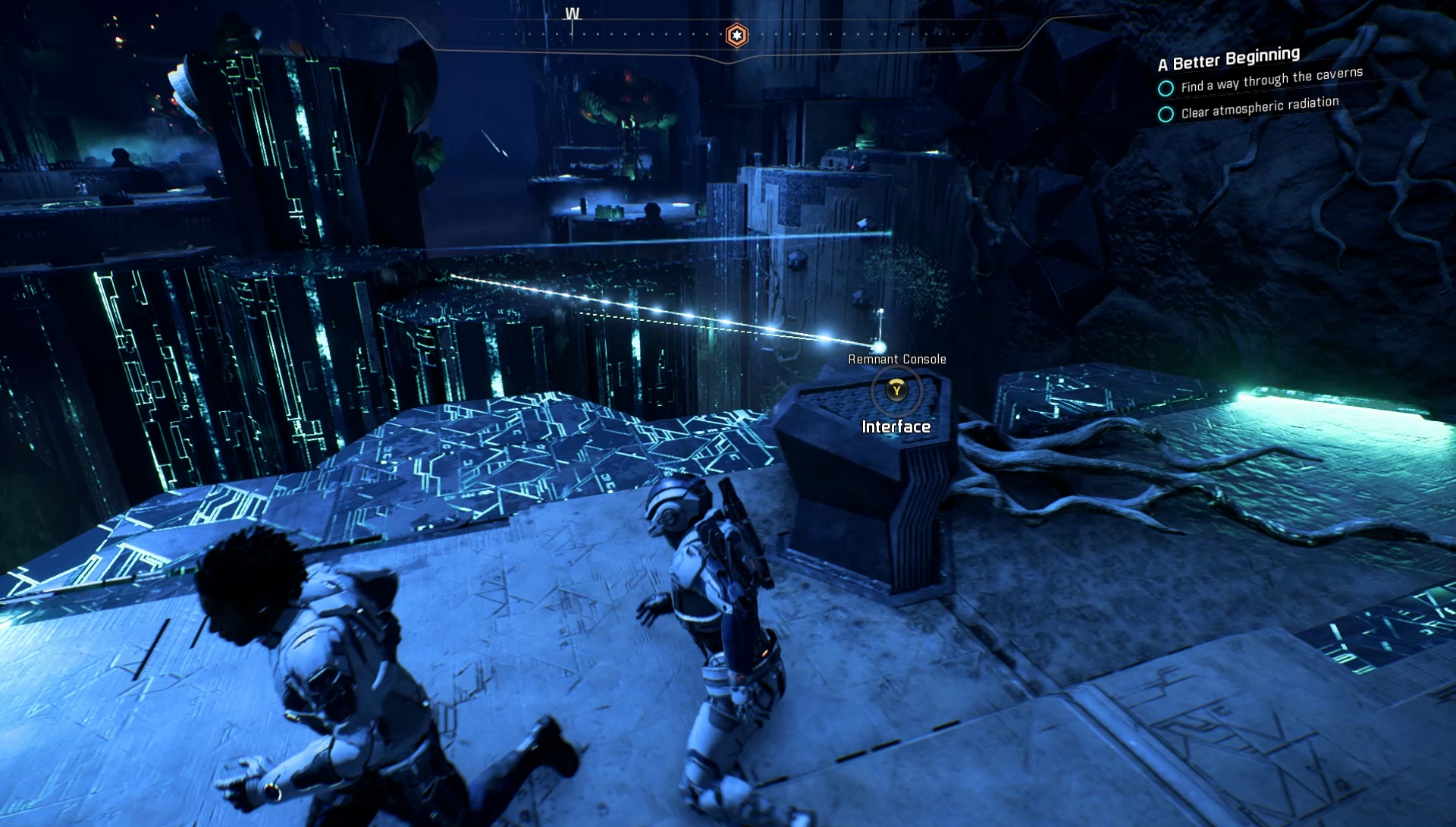 You’ll now find yourself down in the vault, a dark, mysterious labyrinth of corridors and neon lighting. This clearly isn’t something the Kett built, if there was any doubt remaining. First thing’s first: in your starting room after getting into the vault proper you’ll discover another remnant console which you’ll need to scan – then keep your scanner out and use it to follow the cabling towards another console. Scan the console where the cable leads to get the password, then head back up to the first console and use it.

As an aside, don’t forget to scan liberally down here in general, as there’s lots of remnant tech that rewards remnant research points. Some of the best gear in the game is Remnant in origin.

After a cutscene, Peebee splits off from the group leaving you with a party of three once more. Take a look around – note the room to the West you can’t access right now. If you try to access Ryder will make a note of it – this is worth doing for later – later on when you’re leaving the vault you’ll be able to get in here and open a container, and the game will add this as an optional objective if you interact with the door when it’s locked. This is a regular feature of Remnant vaults.

From here on in the vault is a fairly linear set of passages and open rooms, and it’s not really worth us explaining everything beat-for-beat – we’ll just ruin the thrill of exploration. You can easily make it through here on your own. As a rule, however, you should be looking, scanning and climbing everywhere you can, as there are a few containers littered around here with decent loot. This loot is welcome but not be-all end-all, so if you just want to get out of here you can forge ahead without it, but keep in mind vaults are a one-time deal: once you’re done here, there’s no coming back.

As you go you’ll encounter remnant guard units. Some of these can actually be bypassed with stealth if you wish – vocal cues will clue you in as to when. If you sneak or not is your choice, but remember that unlike Mass Effect 2 and 3 Andromeda actually rewards you EXP for every single encounter in the game, so if you take the time to fight these remnant you’ll get a decent EXP reward for your trouble. These encounters add up, so if you want to level up fast take every chance you can to fight. Don’t feel obliged if you’d rather not; Mass Effect Andromeda uses scaling levels, so you’ll never find yourself under-powered. Still, it’s nice to have more skills at your disposal, isn’t it?

After you cross paths with Peebee again your next destination is a door on the right, but if you continue past that door and do a little bit of climbing you’ll discover a container with some fairly decent loot. 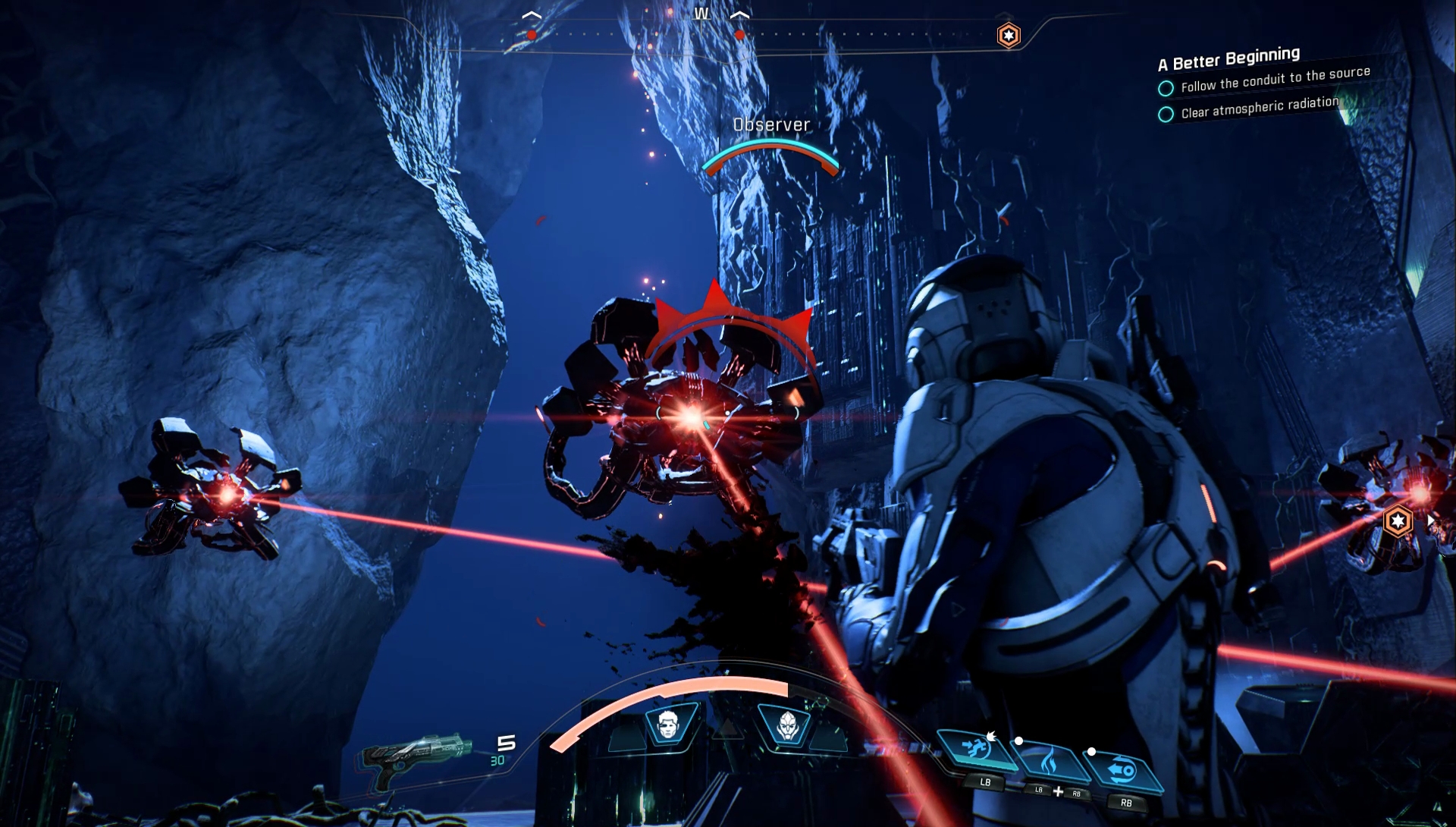 Once you head through the previously mentioned door, prepare yourself for actual combat. (As a note, I hit a bug here where a door wouldn’t open and had to reload – this is not a dead end if that happens to you, reload a save!) At the end of the hallway you’ll be fighting Assemblers and Observers plus a turret that you can either fight or hack.

In this encounter and in general Observers should be your top priority – they have a powerful laser beam that can rip through your shields plus a shield of their own, but they also have a very obvious glowing eye that is an irresistible weak point. Hit them there and hit them hard with a rapid-fire weapon like an assault rifle or SMG, then mop up the assemblers and any other units they’ve assembled while you took on the observer.

Don’t forget that you can order your squadmates to focus on particular enemies; they can keep the heat off you while you take down an Observer, or pile on to get those shields down faster.There are also consoles you can hack in this room – one turns a turret to your side, the other creates cover you can use to protect yourself.

Once combat is over and done with, sweep this area for loot as there will inevitably be some drops from enemies plus some chests, then use the gravity well in the middle. You end up in a new room – but there’s a water leak. The console you need doesn’t work. For a moment it looks like you’re trapped, but then Peebee arrives and has an idea of her own. At her suggestion scan to fix the leak then use the previously broken console. That opens a door. Search to the north before you leave to find a chest with some loot inside – a new melee weapon – this is a static drop of a fairly good weapon that doesn’t change.

The next room is a large chamber with various terminals you must interface with in order to raise and lower platforms. White glowing lines indicate what each terminal will impact, with the currently active section lit up brighter in a glowing white. This room might seem complicated at first glance but it really isn’t: the waypoint shows you where you need to go, and you simply need to wind your way through the area activating terminals in order to build the necessary platforms to get there.

As you go you’ll face off against enemies – mostly Observers and Assemblers. As before, prioritise the Observers as they can tear through your shields very rapidly indeed. Don’t forget as you explore this area to go off the beaten path – most often, there’s a chest. To the south of the area there’s one chest with some static loot – an armor mod that vastly powers up one aspect of your skills while vastly damaging another aspect. You’ll know when you hit this one as it requires solving a Decryption Puzzle.

When you pass the giant plants, scan them for some research data. Keep pushing on through combat. When Liam remarks how cool the plants and self-building bridges are, you’re close. When you enter a room with a giant glowing laser light of bright white in the middle of the room, you’re at the end of this vault-slash-dungeon.

You’ll want to take a moment here: once you activate the vault, you can never come back in here again. If you want to head back and sweep for optional chests, this is your one and only opportunity to do so short of starting a New Game+. (As a note, the door from earlier still won’t be open… more on that in a second.) Once you’re ready, activate the vault.

Escape from the Vault

As soon as the vault is active, run! As you approach the entrance of the dungeon again you’ll pass by that room you couldn’t get into from very early on – it’s now open. Duck inside and grab the items inside, but be damn quick about it!

Once you escape the vault fully, the vault’s purpose will be revealed: it’s a terraforming facility, and over time is going to make Eos much more habitable. The viability of Eos will raise by 50% – but if you leave the planet and return later you’ll see a serious improvement over time, which in turn will open up other areas of the planet that couldn’t be explored before due to radiation, thus unlocking more sidequests. 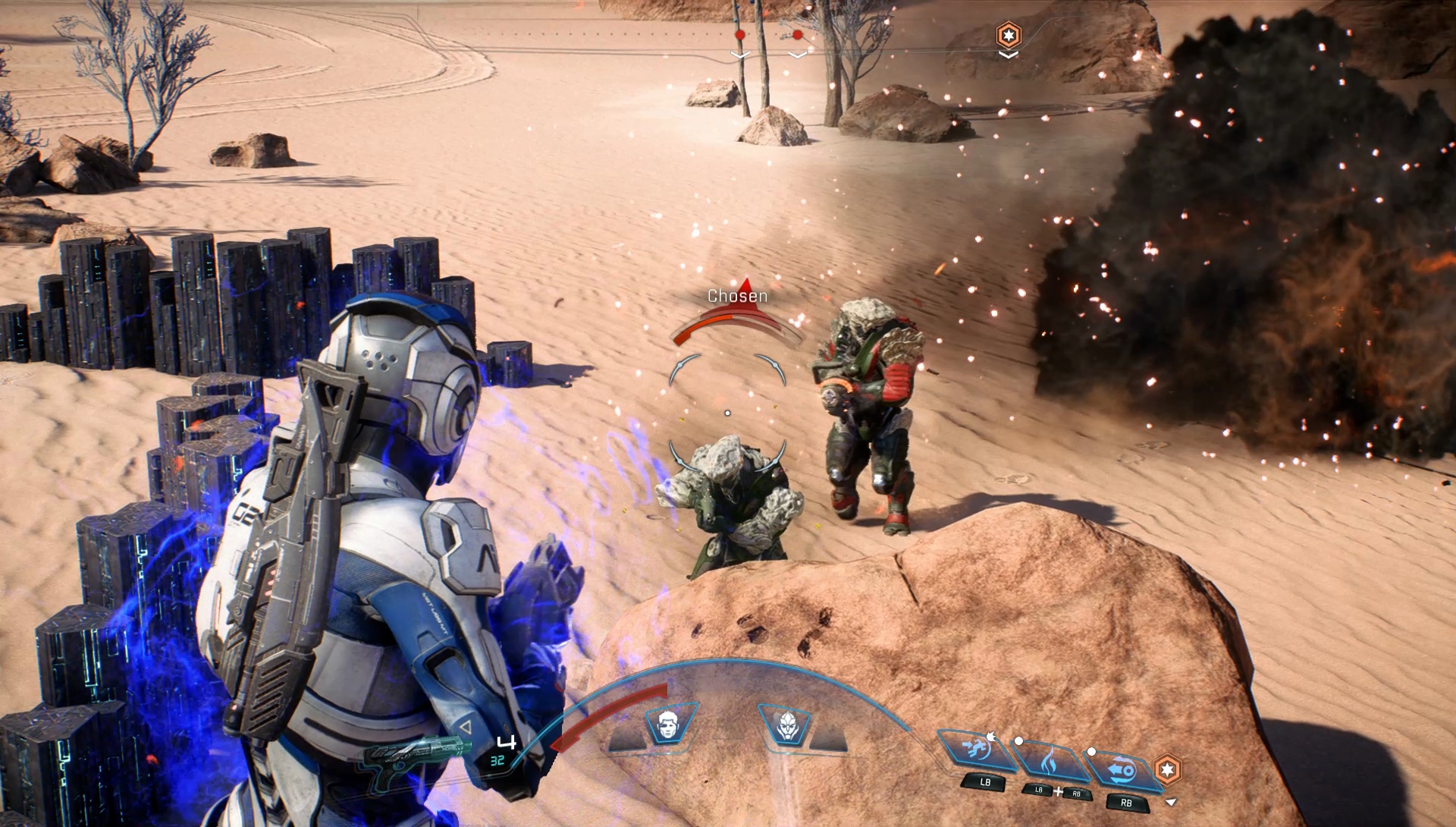 Once you’re out of the vault, hop back into the Nomad and head to your latest waypoint: a suitable site for a new settlement, away from the mess of Site 1 and Site 2. You can either abuse fast travel or not to get there – your choice.

Once you arrive you’ll find Drack is present and causing a ruckus – fighting a bunch of Chosen and a few Anointed Kett. Anointed have shields and big guns, so abuse shield-restoring powers such as charge and cover in order to defeat them. Remember for tougher enemies you can use the D-Pad to instruct your allies to target specific enemies – you should have everyone focus fire on the anointed.

Once the kett are cleared out, you can now settle Eos with a new outpost that’ll be called Prodromos. This will give you +10 viability but also once the settlement is down offer up a bunch of new quests from the new settlers. But… you’re also faced with a question. Science or Military?

As with every Mass Effect game, Andromeda features some big choices. This is arguably the first big choice you face in Andromeda: If you should make the Prodromos outpost into a science-focused settlement or a military base style settlement. You might find this choice difficult to make.

Let us make it a little easier: don’t sweat it too much. While this does have an impact on dialogue and the way some NPCs will react to you, the overall outcome for this particular choice is the same. This is more intended to introduce you to big choices.

Our next stop is Priority Op: A Trail of Hope: Aya, Hvarl and Voeld.

Here are a few new quests you can grab on Eos post-vault:

Drack will join you, too – but for now, we recommend not taking on these quests. Save it all for later.

The radiation will take some time to clear – the smart move is to leave Eos and head to another planet. When you return to Eos later, the radiation will be gone. Take the Tempest towards space and back to the Nexus for a return visit to catch up with Nexus brass and to pick up some new side quests.