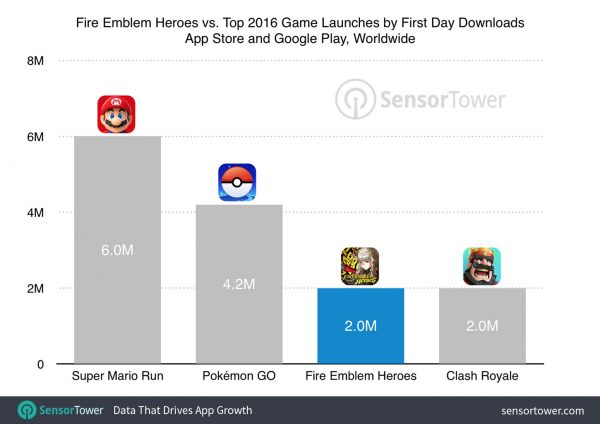 Along with the $2.9 million in earnings, Fire Emblem Heroes was also downloaded over 2 million times its first day of availability through the App Store and Google Play.

As of press time, it is currently the second most downloaded free app on the App Store. On Google Play, the game has been downloaded 72,664 times.

Sensor Tower notes the majority of downloads and revenue can be attributed to Japan, as the IP is popular in the country, with the United States second.

As noted in the chart above, Fire Emblem Heroes sits nestled in third place behind Super Mario Run and Pokemon Go, respectively, with Clash Royale coming in fourth.

Concerning gross revenue, the title is still in third place, with Pokemon Go first and Super Mario Run second on the list.

Developed by Intelligent Systems for iOS and Android, Fire Emblem Heroes is the second mobile game released by Nintendo. It along with an Animal Crossing title for mobile saw a delay last year in order to push Super Mario Run out the door.

Nintendo’s previously released mobile offerings include the social app Miitomo, and while Pokemon Go was developed in collaboration with Niantic, it’s technically The Pokemon Company’s game, as Nintendo only holds a 32% stake in the Pokemon franchise.

Fire Emblem Heroes is available worldwide except in certain regions of Asia.