Game Update 2 will be made available to Dishonored 2 players for free starting next week. 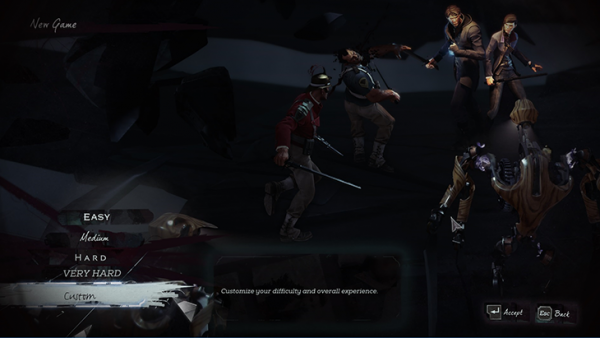 As previously reported, the update provides the player with additional custom difficulty setting along with the ability to replay a Dishonored 2 mission.

Custom Difficulty options can be set using 20 different sliders, allowing the player to “fiddle with everything from how quickly Sleep Darts take effect to how many active enemies are likely to attack at once.” Setting for effectiveness at stealth are another example of how the experience can be tailored by the player.

Another slider is Iron Mode which can be toggled when starting a new game. This enables permadeath and disables the ability to manually save or load.

As mentioned above, Game Update 2 also gives players the option to replay any mission unlocked after the update is applied. The selectable missions will retain the status of your playthrough at the start of that mission.

Other new and improved features based on player feedback will be included with the update. More details on those are promised soon.

Game Update 2 will be made available for Dishonored 2 first on PC as a Steam Beta come January 18.

It will be released in full on PC, PS4 and Xbox One January 23.