The Hunter design in Bloodborne is exquisite, and very soon, it will receive an equally exquisite figure.

Gecco, the Japanese figure and statue makers, have been working on their Bloodborne statue designs since before the game came out. Today, we get to take a look at both of them. They have the attention to detail you’d expect.

The two versions are similar in size, but offer different styles. Both represent the Hunter character seen on the game’s box art on a 1/6 scale (32cm).

The first is out in December, while the other – with the puddle of blood – comes out in February 2016. Take a look at both of them in the galleries below. 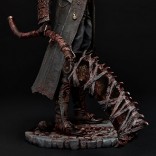