Nintendo of North America has announced a limited edition bundle for The Legend of Zelda: Majora’s Mask 3D which comes with a Skull Kid figurine.

The collectible comes with a copy of the game for $49.99 and will be released alongside the standard edition of the game, the date of which will be announced at later time.

It’s unknown at present if fans in Europe or the UK will receive a similar retail option.

A pre-order incentive at GAME is also being offered in the form of a paperweight, so don’t forget about that if you are in the UK. It’s rather cool and features the signature Majora’s Mask.

The Legend of Zelda: Majora’s Mask 3D will be released on 3DS systems sometime this year. 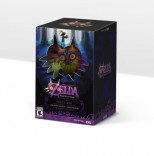