Merge Games has announced The Binding of Isaac: The Unholy Edition will be released at retail on March 16, which is a special DRM-free version which includes a free Steam gifting key, poster, soundtrack, and 40 page “Devzine”.

Developed by Super Meatboy co-creator Edmund Mcmillen, the game stars an infant boy who has run to the basement in order to keep from being sacrificed to God by his mother.

However, the basement in his house does not a safe haven make, as it’s filled with caves and dungeons inhabited by mutants and lost brothers and sisters. Apparently, Mom has been a busy girl.

While in these cadaverous areas of the underhouse, Isaac must search for holy relics and “cut deals” with the devil in order to escape your shank-wielding mother.

It’s an interesting game, and has some DLC in the works for it at present.

According McMillen, the next update will be called The Wrath of the Lamb and it will include a new set of items called Trinkets – one of which is called Red Patch – along with passive bonuses, and other new items bringing the count from 131 to 205.

Currently, there isn’t a date set for DLC’s release, but it is expected sometime this year.

The game was originally released back in September and is available through Steam. 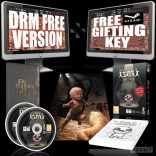