November 17 marks the fifth anniversary of the PlayStation 3's US debut. We look back over the console's journey from an unprofitable embarrassment to the powerhouse it is today - and beyond. 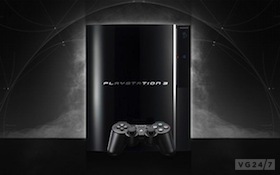 Five years on, with the PlayStation Network finally coming into its own (and still remarkably free), a huge catalogue of exclusives and enough middleware that decent multiplatform titles are taken for granted, it's easy to forget just how violently the PlayStation 3 struggled in its birth throes.

The PlayStation 3 burst into the world sporting a ghastly, shiny silver skin, a handful of completely redundant IOs - two HDMI ports, really? - and a ridiculous boomerang controller best forgotten post-haste. Its drastic makeover into the sensible black brick we eventually got wasn't much of a surprise; Sony was all style and no substance at E3 2005, having no working hardware on hand, and showing off tech demo reels so speculative that they hadn't even been built with early dev kits.

One year later, at a presentation which has become notorious for a number of meme-generating embarrassments, the final form was on show - or rather, the form which held on grimly for the first few months before inevitably being replaced by cheaper, more profitable models.

At $599, the US launch of the PlayStation 3 wasn't a small investment, a fact Sony openly acknowledged, with Ken Kutaragi even suggesting players might take a second job to ensure they obtained one. But as hefty as the price tag was, it was cutting it down to the bone for the over-engineered hardware.

It wasn't until early 2010 that Sony began to make a profit on each PS3 unit sold - more than three years after launch.

Before it started making money, the console had to shed its SD card reader, reduce the number of USB ports, cut HDD sizes and then re-introduce a range of larger HDDs. It threw out PS2 backwards compatibility, reinstated rumble in its classic controllers, and got the PSN working properly. It won the HD format wars as Microsoft bowed out of its half-hearted bid to make HD-DVD happen, with BluRay becoming the standard for high-end home video. And finally, in August 2009, it relaunched in a slimmer form - and benefited from a significant price cut.

Lose the Battle, Win the War
Early sales weren't stellar. In the short term, with gamers comfortably expecting a new hardware cycle every six to seven years, it looked like Sony were scrabbling madly, trailing the upstart Xbox 360 at every turn, and sure to bow out of the console wars in second place.

This is still funny, regardless.

Instead, here we are in 2011 coming to grips with decade-long hardware lifespans, and on the back of another major price cut earlier this year, the PlayStation 3 is neck-and-neck with its rival.

With the Xbox 360 is stronger in the US, Sony still holds sway in Europe and Japan. Globally, the two were just 3 million units apart in late 2010, and as of early 2011, the gap had decreased to 2.8 million.

In terms of games, things are a little hazier. Multiplatform games tend to reflect the various install bases and tastes of respective territories, with Madden NFL a major Xbox 360 seller in the US, and FIFA largely Europe's answer to it. Each platform has quality exclusives which regularly draw massive sales; Gears of War 3 shifted 3 million units in week one, while Uncharted 3 topped that in one day. Swings and roundabouts, through; it may well even out with the next batch.

Third parties have warmed to the console, too. While sales alone make skipping the PlayStation 3 a mistake, developers have gradually been won over by Sony's ongoing efforts to make the once-inscrutable console less of a nightmare to work with. With the right support in place, PlayStation 3 development has become just another thing studios do with existing engines, rather than an adventure into the mad world of assembly programming. Sony opened the PlayStation Network, and at E3 2010 Gabe Newell ate his words. It put PlayStation Move hardware into his hands, and so at E3 2011 Ken Levine ate his words, too. Who knows who'll be waving the Sony flag next year?

The Future
Sony's been talking a good talk for many years, and the numbers show they're onto something, but there are several indications that the company is on the edge of bigger and better things.

One highly-underrated bit of news is the launch of the Sony Entertainment Network. This new bit of umbrella-branding - which also re-christened the appallingly-named Qriocity - finally delivers on something Sony has promised for years - the unification of its digital strategy across its broader electronic offering.

For all its deserved criticisms and the embarrassment of the mid-April hack, the PlayStation Network is a remarkably reliable, versatile and robust digital offering, and the best any Sony division has managed to deliver. Like Microsoft, Sony is working to expand the network's catalogue to deliver music and video, making the console something of a value-added cable TV service.

The SEN will not only bring the engineering and marketing prowess which spawned the PSN to other struggling divisions and be less confusing to consumers than multiple logins, it will also make the PSN itself available on Sony's other entertainment devices, like smart TVs and mobile phones - something we've already seen initiated with the PlayStation Suite. Getting this in place now will position Sony well for the inevitable hardware-agnostic revolution of the next decade.

The timing of this overdue development is easily explained; Sony has united its myriad consumer electronics divisions into one family at long last. No longer will the left hand not know what the right is doing. Moreover, an executive reshuffle has ousted some of the company's purely tech-driven executives and replaced them with staff with an eye for business - which ultimately means pleasing consumers.

It doesn't stop there; with Sony's continuing push for Move and 3D video - both dismissed as gimmicks but proving surprisingly tenacious - and insistence on cross-platform compatibility with the Vita, the PlayStation 3 is fast becoming one of the most connected and versatile bits of gaming and general media kit out there. Sony may finally be able to deliver on its vision of the PlayStation 3 as the centre of the living room. "It only does everything," Sony marketing assures us. That's looking more and more like the truth.

Maybe there'll be no clear "winner" of this generation, but one thing is certain - the PlayStation 3 will not be the loser.