Following the announcement of Soul Calibur V in Dubai last week, producer Hisaharu Tago speaks to Keza MacDonald about the series's grand return, the general state of the genre and more. 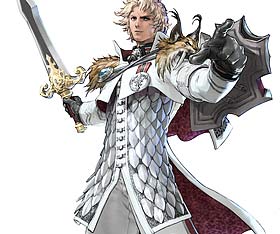 Revered 3D fantasy fighter. Part of the Soul series, which initially launched with Soul Edge in 1996.

Announced at Namco's Level Up event in Dubai earlier this month.

A continuation of the SCIV storyline and features Patroklos, Sophitia’s son, as lead.

The Soul Calibur 5 announcement was the biggest thing to come out of Namco Bandai's Level-Up event in Dubai last week. Strangely, though, we weren't given so much as a glimpse of the game itself – just that trailer, with its brief Siegfried cameo and loving pans of new boy Patroklus. It's perhaps not surprising that Namco Bandai was reluctant to give away too many details so close to E3, but even thirty seconds of gameplay footage would have been more than enough to whet fans' appetites.

What we did get in Dubai was twenty minutes with the game's amiable and animated producer, Hisaharu Tago, who proved an entertaining and enthusiastic spokesperson for Team Soul, even if he couldn't tell us much. His thoughts on the continuing evolution of the fighting genre, and on Soul Calibur 5's place within it, are impressively on the money. He also looks pretty good with an oversized sword. What follows is everything we could squeeze out of him on multiplayer, guest characters, the plot, character customisation and much else – look out for more details around E3.

VG247: The star of the trailer, Patroklus, is the son of Sophita – will we see expansions of other characters' families?

Hisaharu Tago: I can't really give any details just yet, but please do speculate all you like.

Can you name any other old characters who will make a return, apart from Siegfried?

And again, as for which characters from 4 will come to 5, I can't give any more names yet. Just Siegfried is concerned.

What about stages? Are we going to see a mix of classic and new, or will they all be new?

Of course we are going to have some new stages, because this is a new setting and a new story. But we will probably have some of the most popular stages from the other Soul Caliburs make a return. But since the story is happening 17 years after the last game, we are going to adapt those stages, and have new ones that match that new era. I will let you imagine what that might be.

You can't tell me anything about the plot, can you?

[Laughs] No. But I think you're thinking along the right lines, based on your previous questions. Of course we can't say anything concrete right now, so you'll have to use your imagination.

Are long juggles going to be preserved, or is the balance and nature of the battle system going to be changed?

Considering air combos, of course this is one of the features of the games – there are moves that launch people into the air and allow you to strike them a few times before they come down – and this is a feature that is standard for fighting games now, but it is not the only thing in the tactics of Soul Calibur gameplay. There are many other aspects to the tactics of the fight.

How is the flow of battle going to change, if at all?

It's getting faster and lighter. But this is not the core of Soul Calibur, it's more like an adjustment that corresponds to the new standard in fighting games. We have to be at the kind of speed that players expect from us. The core of the system, though, is tactics, moving not only from left to right but also front and behind, circle strafing, ducking behind other characters for a backstab – this is the Soul Calibur gameplay core, these tactical elements, including the air combos that I was just talking about.

An off-screen vid of the Soul Calibur V trailer
from Dubai.

What is important, when it comes to new features, is having lighter gameplay, something that would be more accessible. For example, you want to be able to push a button and dash behind an enemy almost instantly, to make it more accessible and fluid and fun to play. That's the most important update to the gameplay system.

I would like to. Along with character creation, I think these are two features that are very important to the identity of Soul Calibur, so of course we are deeply thinking of having that sort of feature in Soul Calibur 5. What was important for us in previous games was to be able to surprise the players with the kind of guest characters we brought in. We are really looking forward to surprising them again.

The fighting genre has had a bit of a rebirth lately, with the Street Fighter and Mortal Kombat reboots contributing strongly to a sense of regeneration. What do you think of those?

It's thanks to the fans as well, because they are asking for it, and there's a lot of excitement around it, and we're grateful for that. It's not only Soul Calibur that benefits – some other old franchises are coming back, and there all this excitement really benefits everyone.

After Broken Destiny the Soul Calibur team was disbanded to work on different projects, but thanks to this new excitement and the fans that were asking for a new Soul Calibur, we were able to reform the team. So thankyou, we are really grateful!

Do you consider the fighting game developers and players to be one big community, or many smaller ones?

2D fighting has had at least two high-profile rebirths. What about 3D fighters? Are they experiencing the same regeneration?

2D games have been evolving for a long time, it's a very old fighting style. It's like a legend in the fighting genre, and it's always improved, and it's coming back stronger. But with 3D fighters, Soul Calibur is almost unique in this kind of fighting style, with three-dimensional movement. So if Soul Calibur is not evolving, the 3D fighter is not evolving either. So having Soul Calibur 5 coming out, with all these new features, is the first step towards further evolution of the 3D fighting genre. And there's plenty to be done with it.

Have you got any plans for online that you can tell me about?

Online features in fighting games are standard right now. We have to have online features, so of course SC5 will have them. Of course there's versus – playing against a real human rather than a machine – but it's far more than that nowadays, because you have communities of fighters. Having to just randomly fight someone is not enough, because if you fight against someone who's a lot stronger than you, you just lose and are frustrated. And the guy who won, he won too easily, so he's frustrated too.

That is not a good thing. Of course everybody wants to win, and everyone wants a challenge. What is important in the genre right now is to be able to identify the players, and choose who to play with. But there are people who just want to fight all the time and win as much as they can, and people who want to show off the cool character they've made, show off their outfit. So even inside the big community there are smaller communities – the character creation fans, the tournament fans, whatever else. So the challenge for online features today, and for Soul Calibur today, is to be able to take this community into account and make it easy for them to interact how they want.