Dan Hibiki arrives in Street Fighter 5 today and to celebrate, Capcom has released another trailer of the infamous joke character in action – and he actually looks quite good.

The Capcom Pro Tour 2020 Season Final came to an end last night, and once that was out of the way, Capcom published a new full-length trailer showing off Dan – the new character arriving in Season 5 – in all his goofy, pink-hued glory.

"After taking time to train and become stronger, Dan returns with powerful new stylish combos!" reads the official blurb on the new trailer (below). "Taunt your way to a flashy victory!"

Dan, who was announced for the game back in September 2020, is the first character to be added to the game as part of this big new seasonal update, and he will be joined by Rose, Oro, Akira, and an as-yet-unannounced mystery fifth character, too. Expect more news on who that is in due course.

Anyone that picks up Street Fighter 5 Season 5 can also play as Eleven; a new character that basically mimics the movesets of other characters in the game and acts as a defacto 'random select' fighter.

The new update has also come loaded with balance changes and tweaks to how most characters work. The full set of patch notes for this new update have been published by Capcom, so hit that link if you're eager to know how the developer has buffed (or mangled...) your main.

You can check out the rest of the roadmap for the game's final season below, and you can read why Alex just wants to see Street Fighter 6 get revealed at the link. 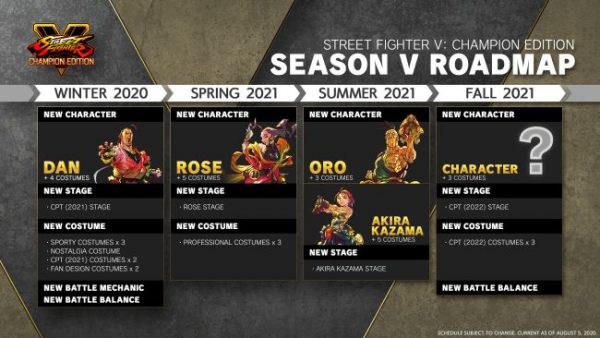