Routine developer Lunar Software consist of four people, but after his interview VG247's Dave Cook reckons they're going to remind many studios how horror is done correctly.

Developed by the four people who make up Lunar Software, Routine is a first-person survival horror game set in a abandoned moon base.

We've got some alpha gameplay footage right here, and yes it does look rather creepy.

The Routine website has screens and details, including confirmation that it has perma-death. It's not going to be easy that's for sure.

You can also check out the Lunar Software homepage for new trailers and updates as they come.

I often get the feeling that triple-a publishers have absolutely no interest in classic survival horror. Why create a weak and largely defenceless hero surrounded by horrific ghouls when you can give the big army man a giant fucking chain-gun and infinite ammo?

It's because the blockbuster console market is all about selling you the big power-trip. They have you figured out as wanting more explosions, more bullets and a hero who can slay armies without breaking a sweat.

Just look at Resident Evil 6; it was a game that revealed Capcom's team to be a group of dithering designers too scared to commit to a single vision of what modern horror should be. So they gave you everything and the whole thing ended up a confused, clunky and bastardised mess that stabbed the original game square between the shoulder-blades.

Meanwhile, the PC horror market is running awkward, clunky circles around the competition for daring to stick to what made the genre to fascinating to begin with. With the exception of Shinji Mikami's genuinely exciting The Evil Within, I can't see any scary console game going back to the roots of survival horror. It simply doesn't sell.

That, then, is why games like Amnesia, Slender: The Arrival: Daylight, Outlast and now Lunar Software's Routine are so appealing to me. These games stick to their roots and don't pander in an attempt to conform to the new vision of what horror should be, and Routine in particular seems to be doing some really interesting things with the genre. 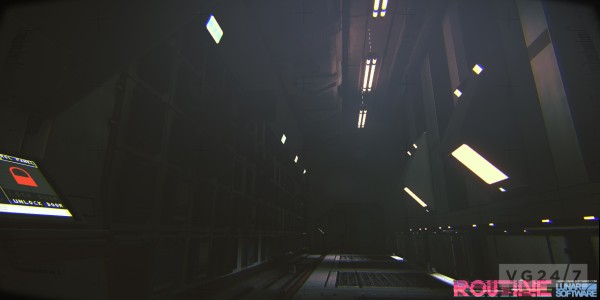 The game takes place in an abandoned moon base designed from a 1980s perspective of what the future would look like. That means plenty of blocky 8-bit text, neon colours and clunky, mechanical tech that seems like it was ripped out of Ridley Scott's original Alien movie. It's both stylistic and unnerving in equal measure.

"Routine was started by just myself," project lead Aaron Foster told me, "and back then I wanted to work on something that I was so personally passionate about I knew 100% that I could finish. Routine was also a lot more simple, it was much more like a Sci-Fi version of Dear Esther as I can not personally program and wanted to concentrate on using my own skill set to finish a game.

"Very early on in the project the other three members joined and Routine became what you know of today. It's probably far too ambitious of a first project with just the 4 of us to take on but it's one damn good way to learn fast."

Given that the team consists of four people Routine is looking surprisingly slick. It suggests an immeasurable amount of hard-work and dedication from the team since the project was announced at gamescom 2012. Just check out this alpha gameplay trailer to see how it's shaping up today:

The 1980's vibe comes from Foster's preference of older sci-fi movies than the slick, futuristic Hollywood romps of today. "From an aesthetic standpoint the 1980s is a massive inspiration in terms of product design," he explained. Also as a kid I watched a ton of movies from the 1980's and to this date they are still the most immersive and believable settings I've ever experienced.

"Most Sci-Fi today is all about making things more sleek, smaller, cleaner and touch screens. All that does in my opinion is make things less relatable. I feel that buttons, dirt in the corner of objects big shitty monitors and rubbish laying around is something we are all accustomed to and understand. The game is already set in a very unfamiliar sci-fi environment and we wanted to make people relate to it a bit more. The 1980's embraced that and so do we."

Aesthetics aside, much of Routine's gameplay appeal stems from its procedurally-generated elements. While the world and lore remains constant, the position of clanking robotic enemies, abominations, keycards and other pick-ups are randomised. Similar to Amnesia: The Dark Descent you can never truly know when an unseen horror is lurking around the next corner. Luckily, you won't be entirely defenceless against your attackers.

"A lot of horror games try to take away your ability to fight back and others give you a million ways to destroy anything you desire," Foster explained. "Routine is not an action game but we also value choice. The Cosmonaut Assistance Tool does have some ability to get you out of a sticky situation, but at a cost.

"First there is a risk and reward element when firing the tool, and secondly if you run out of batteries you cannot use any of its other features until you find more in the environment."

The C.A.T. is a multi-purpose tool that can be upgraded using floppy discs found in the dark innards of the moon base. Firing will sometimes cause the device to eject its batteries, leaving you vulnerable and without a light source until you power it back up. It's unreliable and must be used sparingly, which is certainly more appealing than brandishing a machine gun that never fails to find its mark.

While the game may look and sound a bit like Amnesia, Foster explained that it wasn't an influence on the project, "Apart from the fact that we both have an emphasis on horror and [lack of] empowerment there really isn't much else that we have in common. Amnesia is great but it's not an influence for Routine and when you play it I am sure you will have a very different experience."

In closing our brief interview I had to ask at least one next-gen question, so I posed Foster the possibility of bringing Routine to PS4 via self-publishing. Also note that Xbox One's self-publishing about-face hadn't happened when I conducted our chat.

"Our focus is PC and Mac," Foster replied, and added, "PS4 is a potential option and we love what they are doing, but first and foremost we want to make a good solid version of Routine on PC as that is where our heart is

"I don't think small indie teams will take much advantage of "next gen" tech in particular, as teams are far too small and funds are almost non-existent in most development cycles of indie games but it's great to see Sony reaching out and giving their support to more indie devs."

Made by four people, truly capturing the spirit of a whole genre and with the gloss to fool anyone into thinking it was crafted by a much larger team, Routine is an intriguing project.

Regardless of format it appears to deliver all the key ingredients of a solid horror experience, and well, if it comes to PS4 or Xbox One then that'd be just dandy, but right now it's further proof that PC and Mac are the places to be if you want a dose of true modern horror.

What do you think of Routine? Let us know below.