Returnal has a problem.

Its nightmare scenario: ‘What if you were trapped in an endless cycle, repeating the same thing again and again’, has gotten a lot less scary since we’ve all been trapped inside for 18 months.

How do you make an everyday situation terrifying again?

The answer is tentacles. Lots and lots of tentacles.

With its high-budget visuals, flashy presentation, and Sony first-party backing, it’s easy to assume that Returnal is a similar sort of spectacle action-adventure we’ve seen loads of times around the launch of a new console, and a massive departure from what we’ve seen from Housemarque in the past.

But from your first proper encounter, it becomes clear that Returnal is just as much Super Stardust as it is Star Trek.

All of the familiar ‘rogue-like’ elements are here in force: starting back at the beginning when you die, making your way from level to level through different ‘rooms’ which change order every time, and a heavy reliance on luck to create god runs from a varied assortment of high risk/tiny reward power ups.

But where Returnal sets itself apart from others in the roguelike genre is the fusion of these gameplay hooks with a sci-fi story and positioning more akin to a triple-a blockbuster.

Returnal follows the story of Selene, a space pilot for the Astra Corporation, as she tries to escape her fate after crash landing on the uncharted, hostile and shifting planet of Atropos.

The trippy, esoteric narrative plays out in an intriguingly non-linear fashion thanks to Returnal’s rogue-like elements, starting out denser than a black hole before drawing slowly into clearer light. 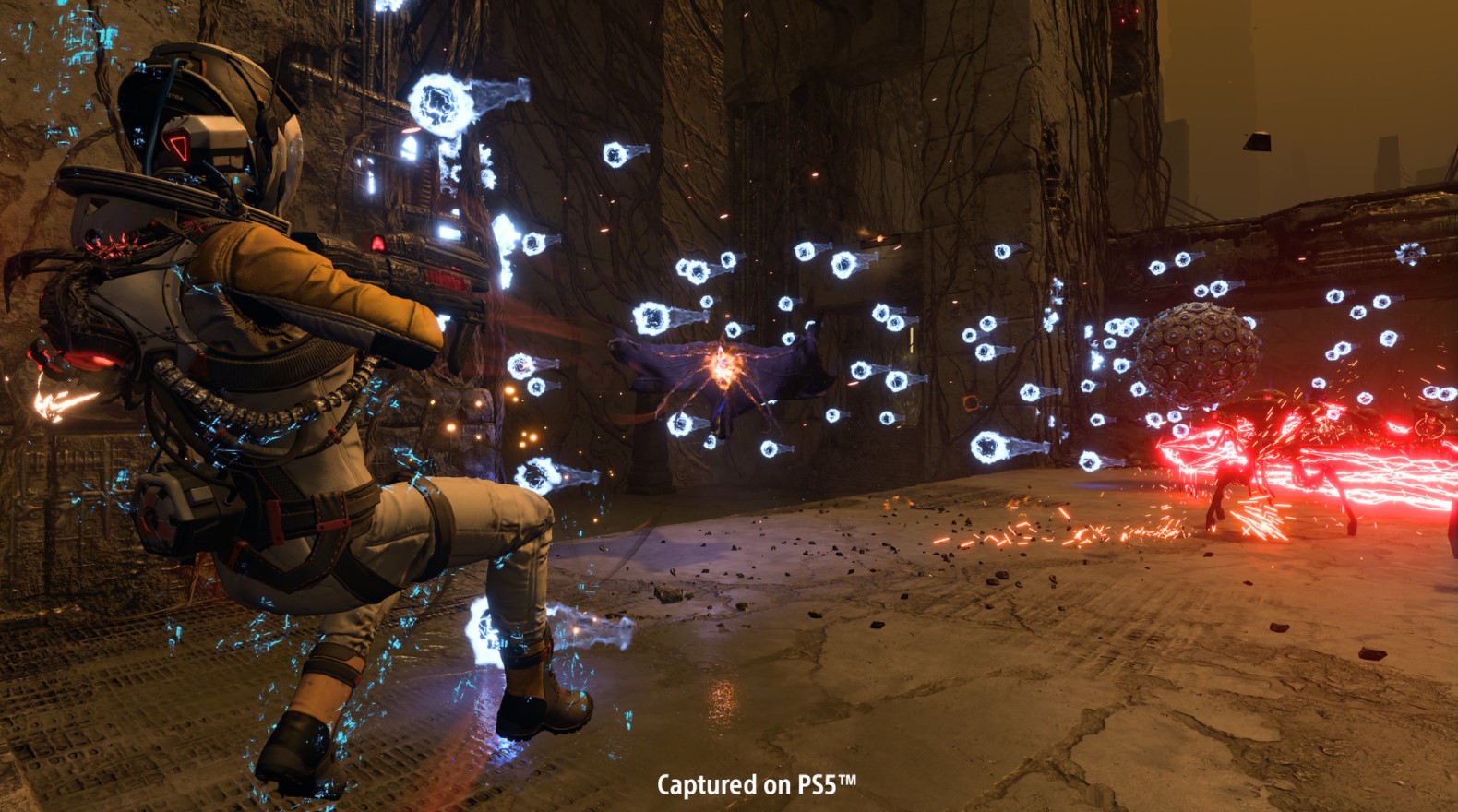 Taking different paths through the same levels yields different audio logs, snippets of dialogue, and cyphers that piece together underlying lore. The intermittent first-person, more horror-focused sections - which trigger as you work your way through multiple cycles - are spooky highlights that help establish the game’s wider motifs and set the tone for your journey.

The metaphors and inspirations at play are rich and extremely spoiler-heavy to discuss, but pull from everything from Greek mythology to the mighty Blue Oyster Cult.

I’m normally not a fan of audio logs and the like, but in Returnal they’re well-spaced and cohesive enough not to interrupt the flow of gameplay, and in the absence of a traditional narrative feel important enough to pay attention to, but also brief enough not to get tuned out.

So while there’s a lot of emphasis on story, the Housemarque DNA shines brightly in Returnal’s gameplay.

From the slippery movement to the classic shoot ‘em up, bullet hell style projectiles that fill the screen, it’s easy to chart the studio’s evolution from Super Stardust via Dead Nation and Resogun to full 3D.

As you make your way through the six varied environments, you can dash and slash through bullets, so once you’ve trained your brain to dodge into projectiles as well as avoid them, things turn into an intense and deliberate slalom as you progressively build out your character by finding better weapons, suit artifact upgrades, and health boost pickups.

Of course, you’ll lose pretty much all of this should you die - save for a single type of persistent resource - which as usual in rogue-like games, adds a palpable sense of jeopardy to every scenario. This is especially true in the fantastic spectacle boss fights, where I caught my mouth hanging open more than once. 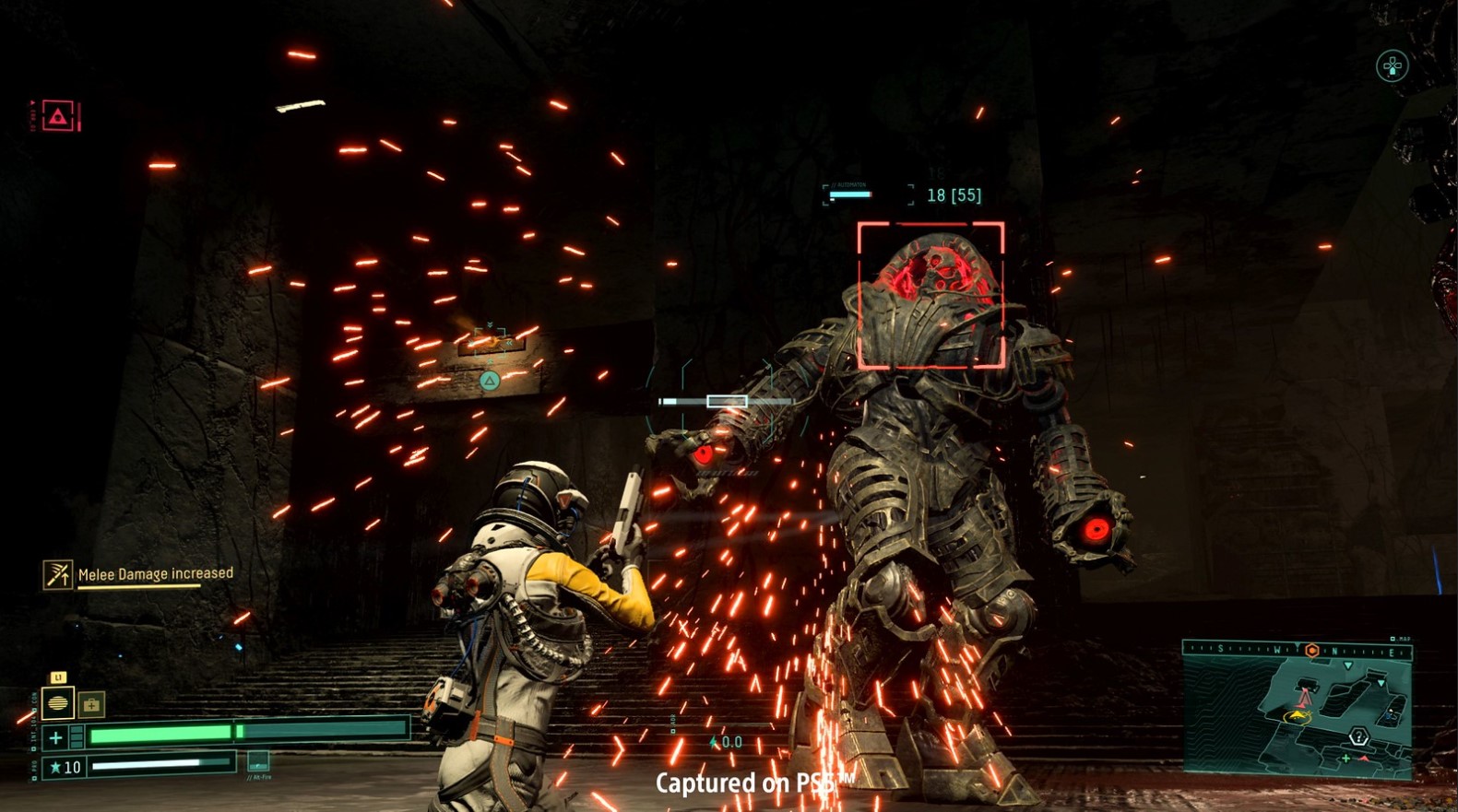 On top of the mysteriously superpowered baubles you find laying around, Selene also interacts with the local flora and fauna to augment her equipment, collecting double-edged parasites and taking chances on Malignant items.

Chests and health upgrades afflicted with Malignancy still give you the upside of their regular counterpart, but carry a chance of making your suit malfunction - an often powerful debuff which you have to complete a difficult challenge to clear.

While you can try and avoid Malignant items, you’ll quickly end up underpowered against increasingly difficult enemies - especially mini-bosses - so you’ll frequently need to take the plunge.

Parasites on the other hand feel a bit weak in general, with their huge downsides often not worth the meagre boost.

Rogue-likes are often like this, and I always feel like it just discourages you from interacting with the systems at all - but at least it’s not wildly imbalanced.

One gameplay mechanic that really works in Returnal though is how it uses the PS5’s DualSense controller. It’s a real innovation that makes the game impossible to really replicate on previous PlayStations, or anywhere else.

How it works is that the DualSense’s adaptive trigger tech effectively doubles the functionality of the left trigger, with a half-press aiming down the sights of your regular weapon, while a more forceful full press triggers your gun’s limited secondary fire.

This, coupled with a punishing active reload system - where you have to fire again at the right time during a reload to avoid a lengthy cool down - makes for brilliantly engaging and tactile shooting. 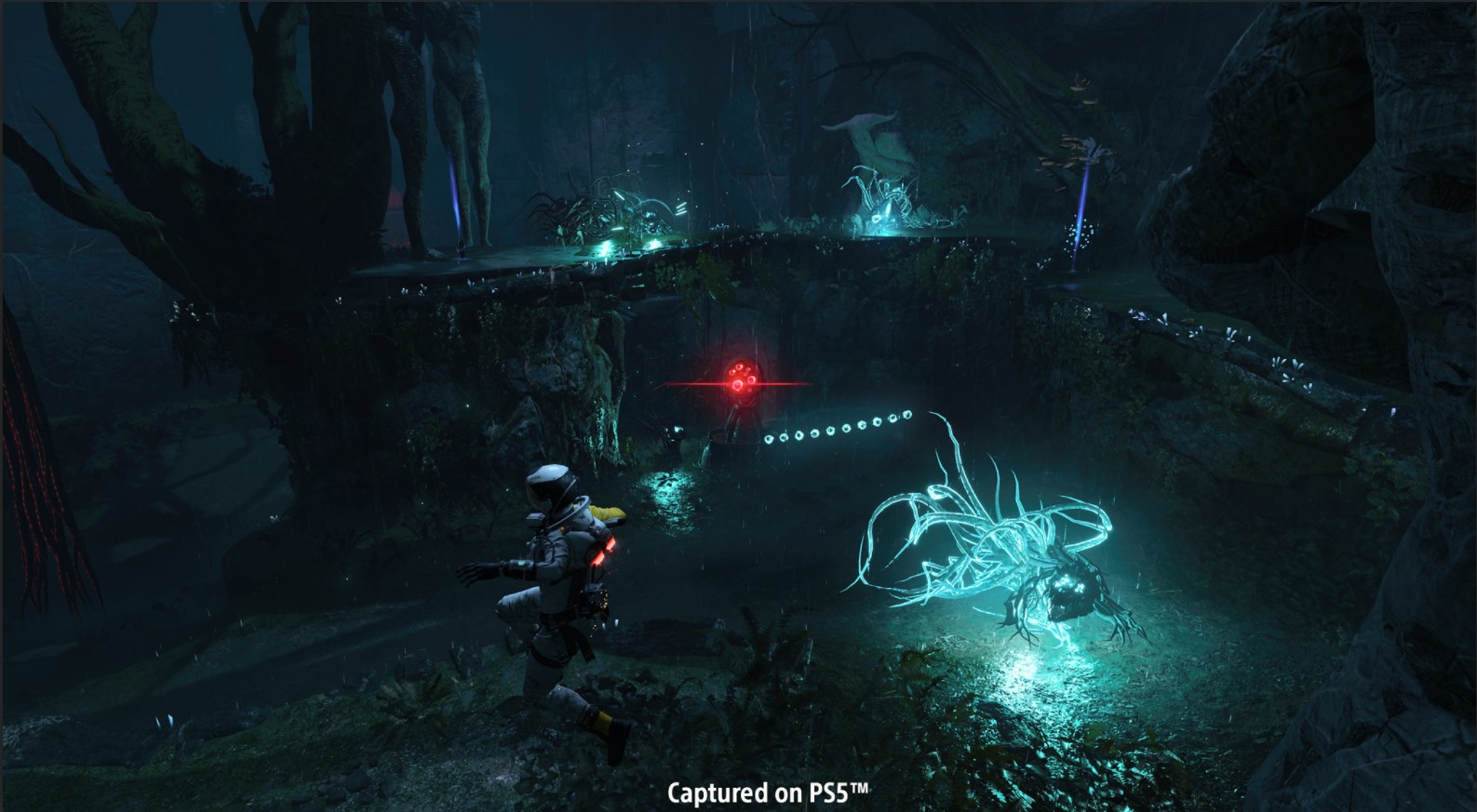 It’s a lot to think about, especially when you’re dealing with so many enemy projectiles on-screen at the same time, but it’s a really interesting example of how these technologies can have demonstrable mechanical applications as well as decorative.

Speaking of decorative though, the haptic feedback also does a lot to enhance Returnal’s retro-future aesthetic, where the clunking triggers and sound effects channel Alien and Blade Runner in the best way, meshing with the analogue feel of your ship and suit’s monochrome monitors and booping synthetic sounds perfectly.

We’ve seen Hades get the melding of story and rogue-like, run-driven gameplay very, very right before, but I don’t feel like it works quite as well in Returnal.

While the opening hours are a borderline contemplative, exploratory experience, the difficulty explodes as you start to reach the last area, making every subsequent run a massive slog.

I think I died three times from booting up the game to reaching the last boss the first time - by the time I’d rolled the credits it was closer to 20. It caused the story progression to come off as lumpy, with a chasmic gap in what up to that point had been a delicately smooth curve.

I just want to know what happens to the space lady, now I’m stuck fighting the same dudes over and over without the through-thread of new story beats because I’ve already found all the audio logs and other nuggets. 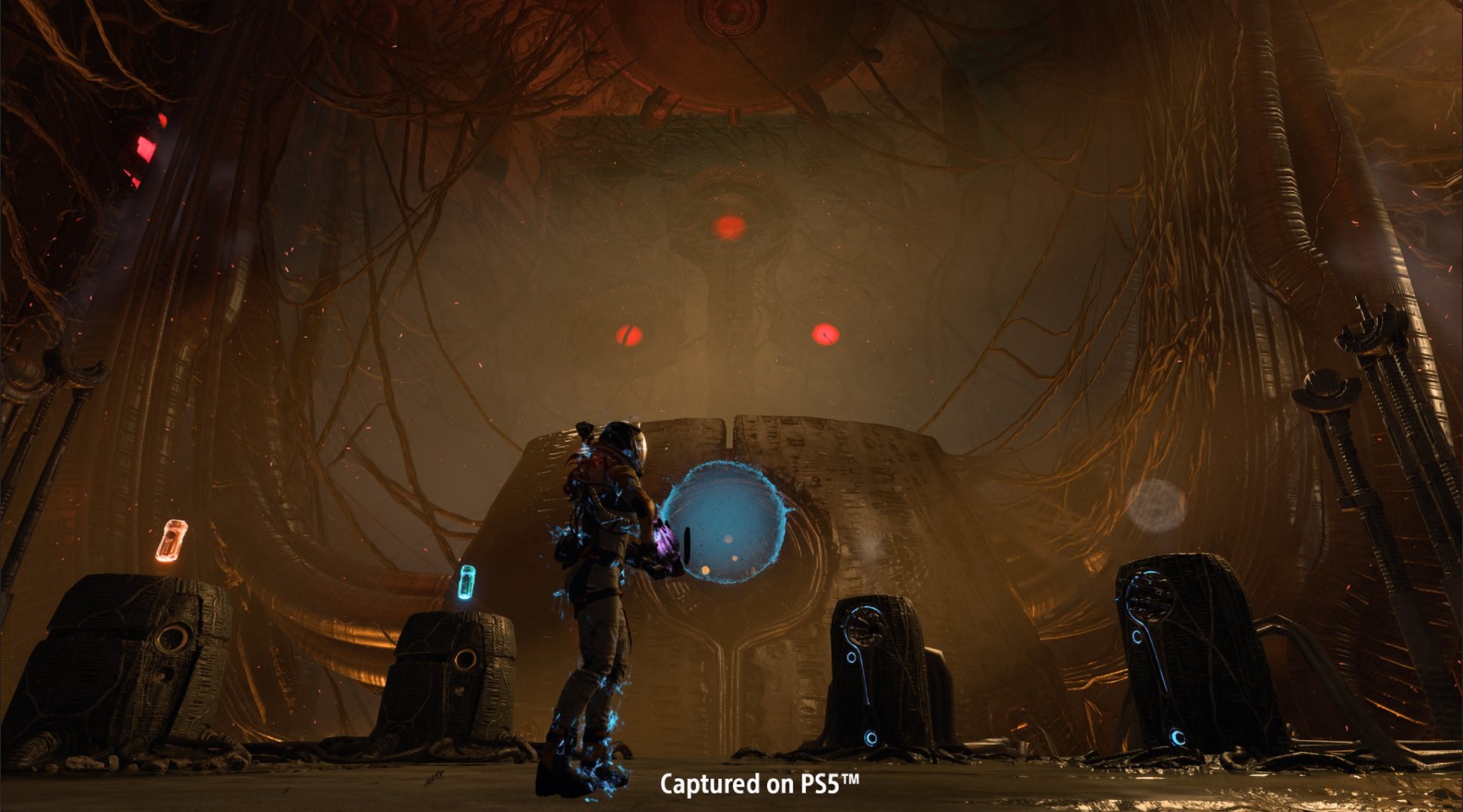 Some of the more capricious tendencies of rogue-like games start to chafe, when you’re really invested in piecing the end of the story together. It’s frustrating when you’re excited to unravel the mystery, only to have to throw away a 40-minute run because of things that feel outside of your control.

Sometimes Malignant items give you massive debuffs to damage or health which can only be cleared by things that spawn randomly - like opening a door or chest with a key - so you’re pretty much goosed.

It’s not insurmountably difficult by any means (although it seems other reviewers died a lot more than me), maybe it was just unlucky variance, but it did seem to interrupt Returnal’s pace and flow - although without the spike, the critical path would have been significantly shorter.

While Returnal’s marriage of rogue-like loops and serpentine story isn’t perfect, it’s a dark, engaging, and innovative experience which provides plenty of gameplay grunt to match its brain-teasing plot.

There’s symbolism to ponder, Easter eggs to spot, and tons of memorable moments across the 20 or so hours it’ll take you to reach the end the first time, with yet more to unlock and mess with after you’ve mastered the core concepts on your initial clear.