Waylanders is a historical-fantasy time-travel RPG inspired by the gameplay of classics like Dragon Age: Origins.

After Dragon Age writer Mike Laidlaw left BioWare last year, we've wondered which project he would join next. For the moment, he's working on Waylanders, a fantasy RPG about time-traveling between Celtic Brigantia and the Middle Ages.

As revealed by PC Gamer, Waylanders is in development from Gato Salvaje, an independent Spanish developer. Laidlaw has been assisting the team as a "creative consultant", and it's easy to see why - the project bears a strong gameplay resemblance to BioWare classics like Dragon Age: Origins.

Waylanders takes place in Brigantia, a region on the north coast of Spain. Your character is a figure who has willingly removed themselves from the Celtic reincarnation cycle, which means they cannot be reborn but are capable of traveling through time. This sacrifice allows your hero to move between the Celtic Brigantia and Middle Age periods to face dangers that threaten both eras.

Waylanders certainly takes a few notes from BioWare's Neverwinter Nights and Dragon Age: Origins - combat is in real-time with tactical pausing, you can switch between third-person/top-down cameras, and there are various party formations to experiment with. The major twist is time-travel, which lets you move between each period. Since your companions can't time-travel, you'll be able to manage two unique parties in each era.

That being said, the reincarnation mythology of Waylanders means you could find other versions of your ancient party with a little digging. "When our main character travels to the Middle Ages, we will have to look for our companions and wake them up," Gato's Fernando Prieto explained. "[The companions] can be completely different people, though from the moment you wake them up, they'll remember what they did in the Celtic period. But they could be an important warrior in the Celtic period, then a housekeeper in the Middle Ages. That can be very funny, and very useful for the narrative." 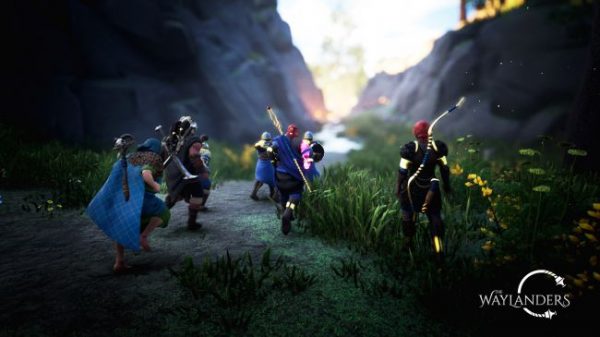 And if you're looking for more BioWare inspiration points, don't worry: romance options will be available.

Waylanders is still in an early state, but is expected to launch around 2020.