Fuse has a real fight on its hands as a new IP in a sea of franchises. Developer Insomniac talks tells us about its approach while Dave Cook has a blast playing the all-new Echelon mode.

Originally announced as Overstrike at E3 2011, the game was later re-named 'Fuse' in August 2012.

Teamwork is Insomniac Games' key hook. The studio's most recent trailer shows plenty of it in action.

Fuse's horde survival mode 'Echelon' was announced in December, along with a new trailer featuring plenty of gunplay.

I first played Fuse back in October. It felt like a functional and polished cover shooter at its core, but it suffered from a severe lack of 'spark'.

Developers need their games to have a bankable identity now more than ever. You're never going to pay top dollar for something that feels average or uninteresting, that's just plain common sense. With cheaper alternatives on PC and mobile formats, console studios need to work harder than ever to arrest your attention.

After revisiting Fuse last month, I'm slowly beginning to understand its appeal. Most of this new-found enthusiasm comes from Echelon mode and yes, it's another take on 'Horde'. What really rattles my cage is that so many studios seem to be taking a half-assed approach to survival modes, as if they've been knocked together in a lunch hour. It simply doesn't fly.

But Echelon feels like a proper attempt at shaking up the format. It's still a round-based survival game contained on a single map, but rather than gunning down waves of enemies until your fingers bleed, Fuse hurls a barrage of quick-fire objectives at the team. It's like a hybrid of Wario Ware and Gears of War's Horde, if such a notion can be conceived.

It works too, turning what could have been a faceless co-op mode into something that feels exciting, engaging and utterly insane. My hands-on session took place at a facility in Pakistan, littered with chain-link fences, elevated platforms and metallic walls. It sounds dull, but it certainly wasn't without colour.

The round began with a Raven gun ship flying in to dispense troops below. Its mini-gun peppered us with suppressing fire while we unloaded on the rappelling troops, sending several bodies tumbling down to the ground. We learned that you can even take down the chopper too if you're fast enough, but we were shit if I'm being honest.

"OK, yep, so we just kill these bozos and then it's on to the next round, right?" That's what I was thinking in my bullish, critical head. But no, the next round saw an ordnance drop fly in from above and our task was to fight a huge pack of riot shield Raven troops for control of the supplies.

If you're too slow they'll destroy the cache and you get nothing. Succeed and you get a big weapon boost. It's all to play for. Round three was sadistic, throwing one of the game's mid-bosses and a big wave of footsoldiers at us. The giant, bastard-hard ape mech flattened our whole team in seconds.

With pride swallowed and our expectations re-aligned, our group of critics hit the restart button and tackled the mode again, but this time in a less-sceptical light. Echelon mode - as it happens - is insanely good fun and, well, just plain insane.

The aesthetic quality on show makes each wave feel like a war in its own right. Fuse particles spray everywhere, bullets ping off surfaces and the din of gun-fire erupts all around you. It's even possible to engage in a bit of Uncharted-style climbing to create ad hoc cover.

I spent a whole round shimmying around the edge of a wall, emerging to shoot over it with my free hand whenever an opportunity arose. When you mix this with the possibilities of Fuse weapons to place impenetrable shields or to inflict area-of-effect damage, you can start to see the game's appeal a little more clearly.

I'm still not convinced that the Fuse chaining mechanic is a marquee feature - basically because I need more time with it - but yes, it did make more sense as I got into the habit of propping up shields to plug gaps in cover, giving my squad a chance to raise hell in safety.

We also scrambled over money bags that spawn in as a reward for good performance. They spew coins all over the shop and feel like they belong in a Smash Bros. game, giving you currency to spend on new abilities and upgrades. It's a daft, playful touch.

I also played a campaign mission set in Jodhpur that threw up some new tricks. What struck me is how much more aggressive the enemy AI felt when compared to my October playtest. They really don't fuck about as they hound you with relentless fire and push forward for the kill.

At one point a stealth cloaked enemy troop grabbed one of my squad-mates like a human shield and forced us to shoot around them for the kill. Between that and the crushing difficulty of our courtyard skirmish, we all felt the pressure brought on by these relentless bastards. Only a weak and tacked-on platforming section felt out of place. The rest felt surprisingly solid.

Drying off my sweaty palms, I turned to Insomniac CEO Ted Price for a quick chat about the game, particularly Echelon's crushing difficulty. "We're not afraid to make a game that challenges players, at all", he said. "With a four-player game, you do have to throw some pretty tough challenges at players to keep them on their toes so it doesn't get old."

Echelon mode certain does keep players on their toes, as complacency will see you downed in moments. Price explained one of Echelon's six sub-modes 'Countdown', as an example of focused teamwork at play.

"In Countdown you're taking a Fuse canister to a specific spot as it counts down to critical mass," he explained, "so you have to get it there in time. But if you stand on the spot, within proximity of the canister, your Fuse weapons are always powered up, which gives you incentive to help protect whoever's carrying it." 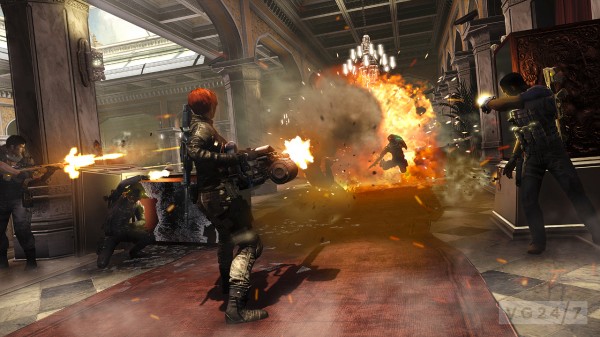 There are many of these little mechanics at play to enforce teamwork in both Echelon mode and the campaign, but I still feel like it resonates stronger in the former. For example, when facing a mini-boss in 'High-Value Target' rounds, Price explained that failure to take down the threat quickly will see it calling in endless waves of re-enforcements.

You're always under pressure and it ramps up excitement apace. When jetpack, stealth and riot shield troops enter the arena however, you need to be ready for a rough ride. I asked Price if this visible attempt to do new things with the Horde archetype was a key goal of Insomniac's.

"It's easy to become complacent as a player of round-based games" he explained. "So it was important for us to make sure that every battle felt a little different. We can do that by randomising the way sub-objectives appear in Echelon."

The same goes for platforming sections in the campaign. Although the clambering I experienced felt asinine, Price assured me that it was just a taster of what's in store. "It's important for us to break up combat and it's important to not create a one-note game where you're always fighting.

"Those are our moments to tell some of the backstory in real-time, and create conversations between characters that help flesh out their personalities and tell more of their story during those traversal moments."

Whether or not that story will help support the crazy gunplay at the beating heart of Fuse remains to be seen. I'm now keeping a cautious eye on the game's development moving forward, just in case my renewed hope is justified. It could end up surprising everyone come launch day, and besides, new IP is what we need more of, right?