The studio's first title is Table Top Racing, a 60 FPS, 3D racing title for iOS. It follows a similar format as Micro Machines and Mario Kart but with the weapon-based mentality of the WipEout series.

You can check out the Playrise Digital site for information on Table Top Racing and its next iOS title Baby Nom Nom.

Nick Burcombe was working at Sony Studio Liverpool when his employer announced a wave of lay-offs at the WipEout developer. He was one of the casualties.

"This was actually the first time I'd been made redundant so it was a new experience for me," Burcombe explained. "In many ways though, I was glad that the studio had survived and that the Wipeout franchise would carry on after its incredible 18 years."

As we now know, Sony shuttered the studio in 2012, and in many ways Burcombe dodged a bullet, because rather than leave the industry, he formed Playrise Digital, a new studio that launches its first title, the racing combat game Table Top Racing. It's a 60 FPS app that is said to hit a quality level that competes with the home console pack, which is becoming common in the technically proficient mobile sector.

It is certainly a prosperous market - one that has drawn in many big-name developers over the years - granting Burcombe and his team space to explore new ideas, grasp emergent mobile tech and to largely stand aside from the pitfalls of the triple-a stereotype, such as spiralling production costs, poor financials and the quashing of new ideas. 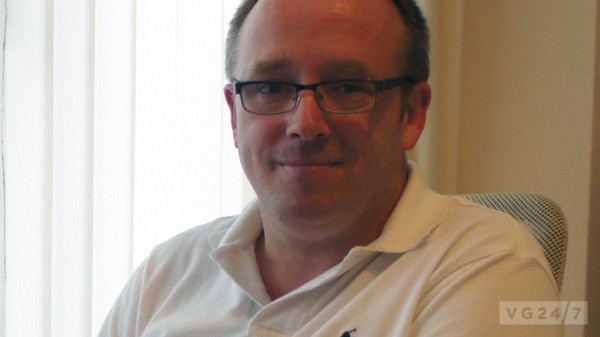 Setting up Playrise wasn't quite straight forward however, as Burcombe dabbled in many worthwhile pursuits before forming the studio, such as working with Atomicon - formally Playbox - and assisting Sine Mora developer Digital Reality in developing Skydrift. Nick then returned to Liverpool to work alongside Magenta Software, which is where he met his Playrise Digital business partner Chris Maloney.

"Over the course of that period I learned something about myself that would lead to the formation of Playrise Digital", Burcombe explained." I'd got the bug to do my own thing and thought if I can find the right people and bring them together we could achieve something pretty cool.

"I was still at Magenta when I met my current business partner Chris Maloney and on one of the many rainy-night walks back to the car park, we talked about the explosion in mobile gaming and that we could see for many games in that sector, the quality simply wasn't there.

"There are of course fantastic developers in the mobile sector that have also understood that average quality product is unlikely to be in demand going forward and so we agreed to look at taking the next steps toward setting up an indie studio focussed on high quality mobile gaming."

Although Playrise Digital is an indie developer releasing on iOS, Burcombe quite rightly believes that moving into this sector shouldn't be regarded as a shift away from triple-a development, because it's clear to see that the mobile space still produces high quality, highly lucrative titles regularly.

"For us it's the other way round," Burcombe stressed. "We still want to produce triple-a quality, but this time for mobile devices. Of course the biggest difference going into mobile space for me is the usual 'trilemma': people, time and budgets.

"All of which are a fraction of the resource pool you'd have at somewhere like Sony. In some ways it's been an exciting challenge, but the effort to produce the quality we have on Table Top Racing has been extraordinary and the team have been as passionate about reaching triple-a quality as they would be on console. 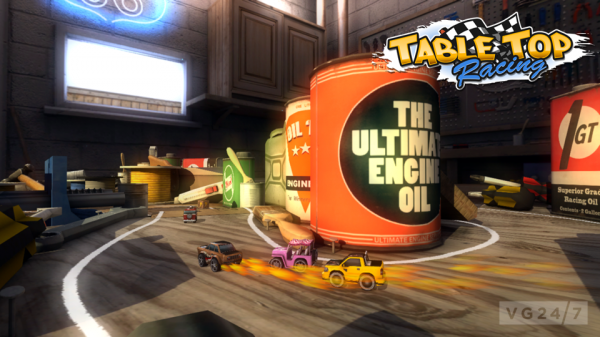 For Burcombe and Maloney the decision to make a racing game felt natural, as both parties wanted the studio to play to its strengths. Bucombe continued, "We talked in depth about our experiences playing games like Mario Kart and Micro Machines and that was it - it was quite obvious to us what we should be making. We set ourselves some quality goals - things like 60 fps gameplay and simple, responsive controls and then went about crafting Table Top Racing.

"We consciously made the decision that it shouldn't be too weird or abstract and that gamers of all types could recognise both the world they were racing in and the vehicles they were racing. Programming and Art then went to work to see how far we could push the mobile hardware - I think what they have achieved is remarkable."

Table Top Racing bears all the hallmarks of what gamers perceive triple-a titles to have, such as 60 FPS play, online multiplayer, cloud saves, native retina 3D visuals and highly polished visuals. Technically it's no slouch, but it's also a playful title to boot.

Breakneck chases play out across eight circuits, such as the tables in a Japanese sushi bar, the "Toy R' You" kid's store and a garage workshop setting, with proposed, community-led content that could see more levels, weapons and modes added post-launch. In an industry where Micro Machines is notable by its absence, the timing of Table Top Racing is absolutely perfect.

Even the cars are bonkers, such as the "Whippy Kai Yay!" Ice Cream Truck and the NamGang 4x4" army jeep. Players will be able to customise and upgrade their rides using coins earned through winning races, which will be essential to dominating the Game Centre leader boards. Even changing your car's wheel type can have advantages such as giving your car the ability to jump, or simply go faster. 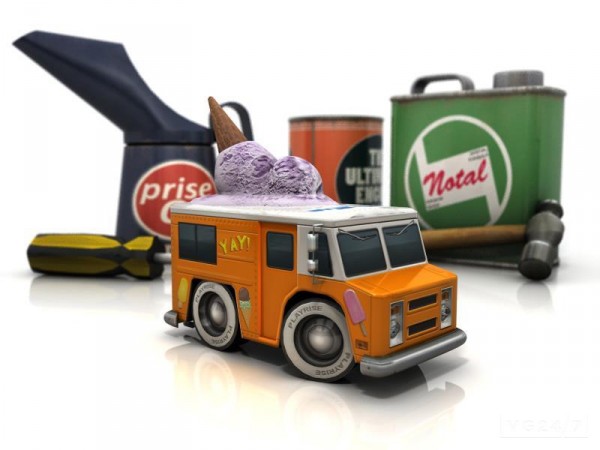 Being of WipEout descent, Bucrombe naturally opted for each car to have weapons, "We have four standard weapons that all cars can randomly get awarded by smashing through crates. Now on the surface of it that doesn't sound like a lot, but they all function very differently and can be used both for attack and defence.

"For example, if I pick up an EMP, I can use it in different ways. If I'm in first place I can use it to defend my position by stopping faster cars overtaking. At the back of pack I can use it to clear mines left on the track by an opponent so I can catch up without losing speed. I also can use it to destroy an incoming heat seeking missile but this required good timing skills.

"All the weapons can counter each other and have numerous uses. Exploring how best to use them in a strategic way is great fun. We added other weapons as experiment, but they threw things off-balance, so we've stuck to the stuff that works well."

The game seems like it will be a lot of fun, and will sit well among the darlings of the iOS scene, and even though we see games come and go on App Store rapidly, quality titles will always rise to the top. No market is without risk, but Burcombe firmly believes that the mobile sector is the place to be at present.

"My belief is that it's simply too high-risk in the console business at the moment to bring new IP to console," he explained, "which is why so many mid-sized developers and internal teams have gone to the wall in recent years. Budgets have been escalating towards blockbuster movie levels for some time now and so many companies have been burnt by trying to introduce new IP's that something has to give.

"I guess it might look like stagnation to some people, but equally on the other side of that argument - there is a huge audience for those big IP's that are established and it's not going anywhere in the short term. Call of Duty seems to break records every year, no doubt the next instalment of GTA will be huge - as will others and so if you're working on one of those big franchises there's a definitely a future ahead of you because they all have massive audiences waiting on every update. 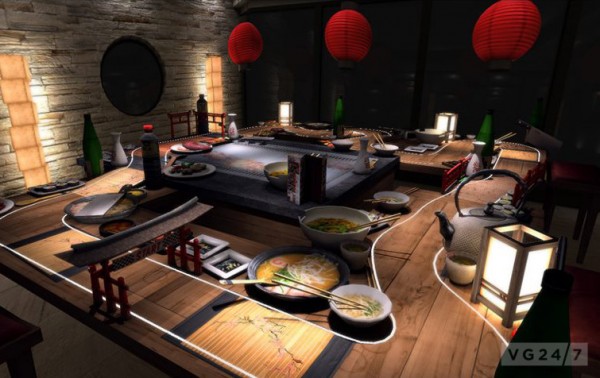 "From my own personal perspective, I always thought that rather than this become a console versus mobile war, it would be more interesting and beneficial to players if the two camps could integrate one with one another. So with something like Gran Turismo, you should be able to conduct B-Spec races or tune cars and test performance on the iPad, sync it up with PSN/iCloud and your console game has evolved.

"Perhaps something like GTA, you could have an element of getting hired guns to do sub missions to make more money or reclaim turf - or perhaps a casino component to it when you're out and about."

Finally I simply had to ask for Burcombe's personal opinion on whether or not we'd ever see a WipEout game release again, following Sony Studio Liverpool's closure. While he hasn't worked at the studio since 2010, he offered me his own distanced thoughts on the matter.

"Who knows?" he asked. "Sony keep things pretty tight regarding plans, but my honest answer is probably not, even though I'd hope so. I'd love to see Sony experiment with some of its IP across other platforms - maybe that's the 'Psygnosis' in me. If I had the chance - I'd love to bring something like Wipeout to iOS. I'd want to go freemium to reach as wide an audience as possible, and then hit them with something utterly spectacular.

"There's so many ways to monetise a game like Wipeout I think it could be a great success - the trick is to keep the costs under control if you know you're going to have more of a hardcore following. I think the fans of the franchise deserve another chance to put themselves into that Zen-like state and be at one with it."

Table Top Racing launches on iOS this month. You can check out the official Playrise Digital website for updates.