It looks like we may not have to wait too long to learn more about Crysis Remastered.

As it stands, we know very little about Crysis Remastered, which was leaked-then-revealed last week. We do know it's coming to PC, PS4, Xbox One and Switch, and that it will support software-based ray tracing, but that's kind of about it.

On the weekend, Saber Interactive boss Tim Willits posted a couple of Tweets indicating that more information will be revealed soon. Saber is, of course, the developer behind the remaster. The Tweets have since been deleted, but not before WCCFTech grabbed a screenshot.

"We will be talking about the remasters more soon. I'm glad people are excited," Willits said in one. "I always loved Crysis games, and it's exciting to work with Crytek to bring these games to new audiences," he added in another. 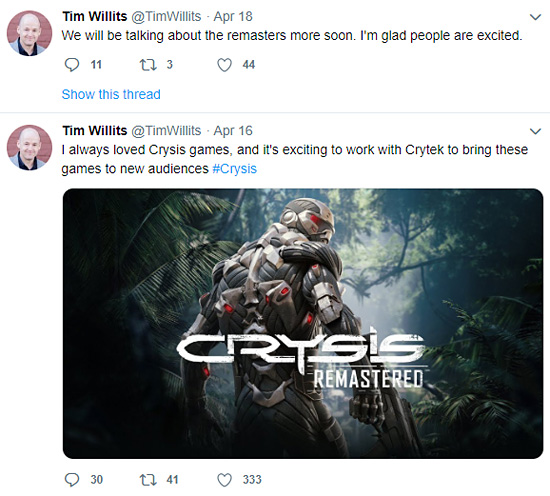 As the site notes, Willits says "games" in both his Tweets, so it's possible there's more than just the first Crysis being remastered. Unless, of course, it was simply a mistake, which could be why the Tweets were deleted. What they also confirm is that more details are being shared soon, which is good news.

Crysis Remastered does not yet have a release date.