Slower and more thoughtful, Call of Duty: WW2 stands out from the yearly update cycle. 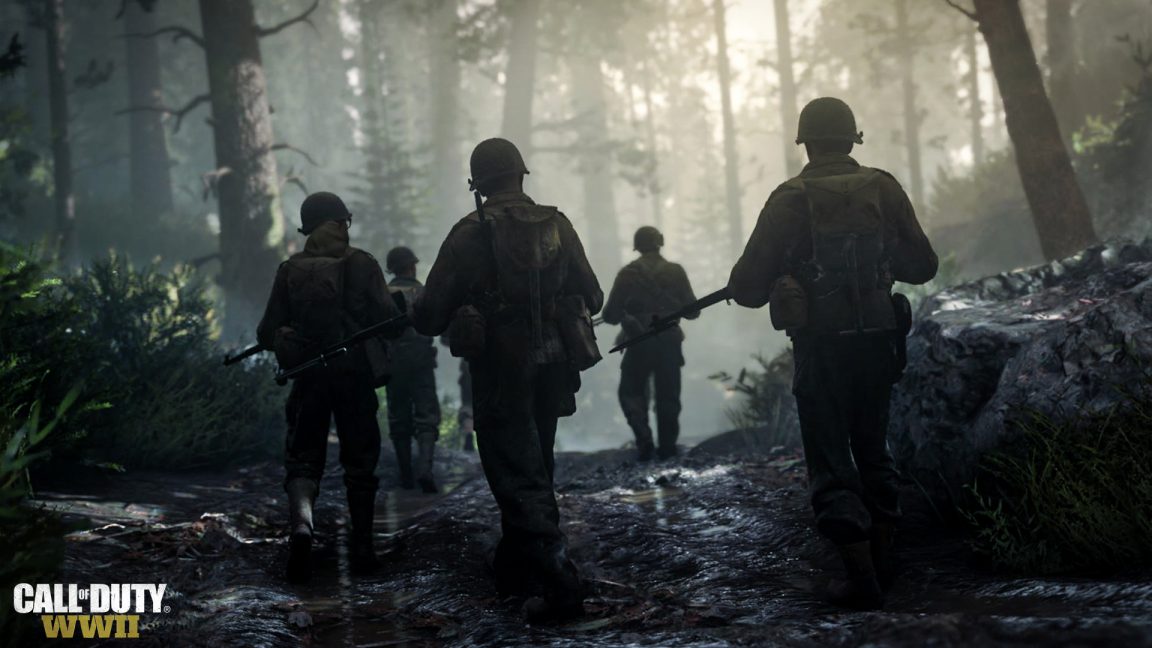 Call of Duty WW2 already had a head-start in my mind when I went to see it, and that's thanks to its development house. Sledgehammer Games has a great pedigree what with that Dead Space lineage and all, but more importantly they actually made the last Call of Duty game I really cared about: 2014's Advanced Warfare.

I liked that game for different reasons than many, I'm sure, since I came to it almost exclusively for the campaign. The fact the game had Kevin Spacey chewing the scenery was a significant bonus, but I'm also quite a fan of the yearly rollercoaster ride of Call of Duty's reasonable-length campaigns. For me they're perfect one-shot games for the holiday season. I always dabble in multiplayer but haven't gone deep with addiction since the Modern Warfare heyday.

"Slowing things down really does return some weight to the Call Of Duty formula. There's plenty of bombast and action set pieces, but moment-to-moment the combat looks like it might be more considered thanks to a tempo and ability set befitting of the era."

The presentation I sat through for WW2 is largely focused on single player, though we're given the vaguest run-down of multiplayer modes including the fact that there'll be a new co-op mode filling the zombies slot. You can read a little more about what was revealed there in our piece on everything you need to know about the game. We also spoke to the developer Sledgehammer Games, if that's your thing. Here, I want to talk about my feelings on what I saw of the campaign in more detail.

One thing is clear almost immediately once my Call of Duty WW2 meeting starts; this is going to be very different to the last few games, and certainly not just the same thing with a 1940s skin. Sledgehammer co-founder Michael Condrey guides me through a pitch for what the game is, and three things he repeatedly stresses stick with me.

Firstly, he describes working on a game set in the second world war as an honor. At one point he outright says that the game has a duty to depict the brutality of the era to a generation who now might not be so familiar with it. He says the game needs to set an example so that a conflict on this scale can't happen again. It feels a particularly pertinent message given current affairs.

Second up is respect - COD WW2 is all about that, too. Where most recent COD games have focused on a single super-hero blessed with incredible training and equipment, WW2 is as much about the guy next to you as it is its fresh-faced, barely-trained protagonist. It's a story that wants to be Band of Brothers or Saving Private Ryan more than a non-stop action fest, and even with the limited gameplay shown it seems like this title is more interested in giving its narrative and characters quiet moments in which to breathe.

Even in gameplay we see this focus manifest in interesting ways. Some allies have special attributes and skills that can be triggered dynamically during gameplay. One member of your squad can toss you fresh clips in a way that recalls Bioshock Infinite's Elizabeth, for instance. Other times, Call of Duty's heavily scripted sequences take over and make a big point of emphasising your allies. While there are recognisable Hollywood faces among the cast such as Transformers' Josh Duhamel, the game appears to be actively avoiding any attention-grabbing, distracting casting in favour of a more subdued tone.

Subdued is probably a decent word to describe the tempo of the game in general when compared to its peers, though WW2 itself was of course anything but. This is the final major point of Condrey's that sticks with me. There's without a doubt a slower pace to the gameplay I see - gone are the double jumps and dashing slides. Jumping to prone out of a sprint has a hefty weight; the character appears to slam to the ground with force. 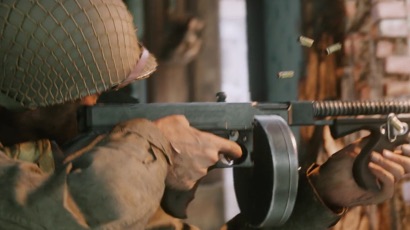 While we only got to watch a few short snippets of campaign levels based around the D-Day Normandy landings and the Battle of Hürtgen Forest I get the impression that slowing things down really does return some weight to the COD series formula. There's plenty of bombast and action set pieces even in what I saw, but moment-to-moment the combat looks like it might be more considered thanks to a tempo and ability set befitting of the era.

I hadn't really thought about it until I saw it, but the technology available on current console hardware and Call of Duty's penchant for large-scale set pieces are a natural fit for portraying some of the most harrowing aspects of the second world war. The clip we see of the Hürtgen Forest level drives this home particularly well. At first it's you following a sort of natural trench through thick-set trees taking out unaware enemies from a mid-range distance, and it actually reminds me of a Modern Warfare level that has a similar set up. You're sneaking, but once you cover is blown one of the staples of WW2 is used against you - heavy artillery. Your allies are screaming for everyone to run and the sky seems to set ablaze. I experience this in a room that had been decked out for the sole purpose of giving these demos and that meant that it had a pretty awesome surround sound setup, but it was still impressive just how strong an assault on the senses artillery bombardment was.

"It also feels like a shift that has been carefully thought about and given the attention-to-detail needed to make it feel like a lot more than a palette swap."

The trees are coming apart in front of you. There's splinters everywhere. The noise is deafening. So you run. It's probably one of the most effective COD set-piece moments I've seen in years, and it's actually a relatively simple threat when all said and done. It immediately called to mind an episode of amazing history lecture podcast Hardcore History where the host read diary accounts from soldiers who suffered under artillery - so to me, it felt pretty genuine. That's impressive.

The same is true of the representation of Normandy. I'd planned to go in asking the question of if Condrey and Sledgehammer felt nervous going back to a setting that'd been pretty heavily mined by video games in the past, but seeing the D-Day mission of COD WW2 dispels that line of thought. It's clear that enough time has passed that they can offer a convincing and more realistic take on these events that couldn't have been done previously. As such, I'm on board.

After well over a decade of yearly COD it'd be extremely easy to just roll eyes and assume that COD WW2 is going to be more of the same in the second world war. To a point it is, of course - you can absolutely still look at this game and say 'oh, that's Call of Duty', but it also seems to go far enough to truly differentiate, finding a balance between old and new.

After years of jetpacks and space and exosuits and modern weapons, this is a refreshing shift. It also feels like a shift that has been carefully thought about and given the attention-to-detail needed to make it feel like a lot more than a palette swap. Hopefully it feels as good to play as it did to watch, and hopefully Sledgehammer can keep up the quality levels in the rest of the campaign and in multiplayer, which will be fully revealed at E3. My attention is now firmly gained, anyway. I'm looking forward to seeing more.