Call of Duty: Ghosts will require a mandatory 3GB install on Xbox 360, if a photo of the official box art is to be believed. The packaging also states that the max multiplayer count is 12 on current-gen. 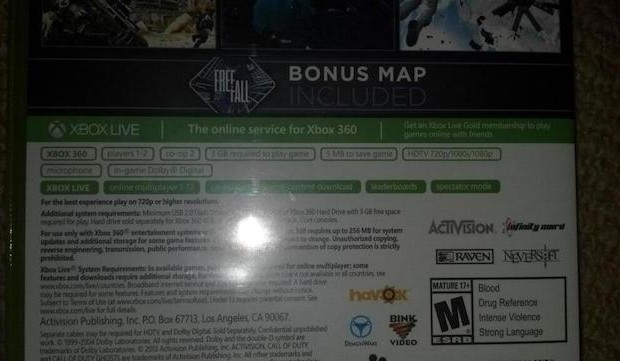 The above photo was posted by Twitter user Slav_on_my_Nob (lovely name chap!), and was spotted by CharlieIntel.

You can see the line "3GB required to play game" on the box art, as well as multiplayer for up to 12 players. The site suggests that Ground War mode could be absent from the game, seeing that it typically allows for 12-18 players in total. It's unclear if the mode remains in Infinity Ward's shooter.

It's worth noting that next-gen builds allow for 18 players.

Conversely, the PC version requires a 40GB install. Get the details and full specs here.