Course seven of Super Mario 64 is Lethal Lava Land, and brings another classic Mario staple level into 3D: the dark lava stage. We mostly saw caves in Super Mario World, and this is now Bowser’s Castle – but the whole stage is blanketed in Lava that, in a couple of hits, can kill you.

Keep in mind that unlike sinking sand in the next stage, Shifting Sand Land, the lava here hurts but doesn’t immediately kill. In fact, Mario bounces high off the Lava in a huge jump, holding his burning behind – which can be used to get back to platforms or even cheat a little to reach ledges that a normal jump wouldn’t.

The Lethal Lava Land painting is in the castle basement, very central. You can’t miss it. 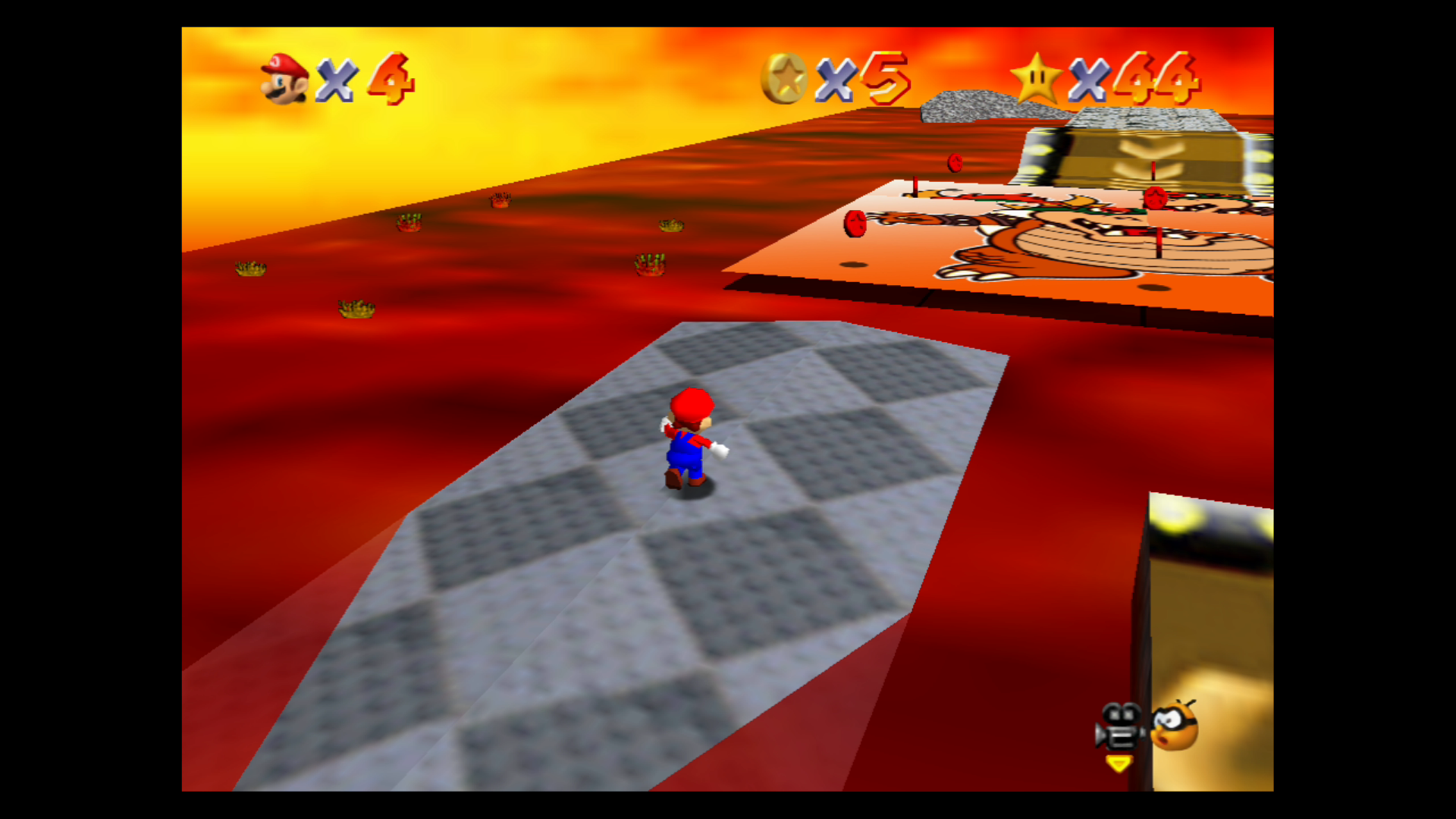 On the far northern side of the stage from the area where you start there’s a large platform – the quickest way is past the sliding Bowser Puzzle with the red coins. There’s a single large Bully enemy on a big platform. The Bully will basically fight you for space – you need to push it into the lava, just like its smaller siblings. Doing so will net you the star.

Remember that Big Bully? Well, now it’s time for some little ones… followed by a big one. To the right of where there was the battle with the Big Bully, there’s a platform with three normal-sized Bullies. Knock all three off the platform and then – surprise – another Big Bully appears. Defeat it to get the power star to spawn.

You know what we love? An eight red coin challenge that doesn’t require us to write out every coin step by step. And boy, this is that! Follow the stage around from the start point and to the left – there’s a sliding puzzle here with Bowser’s picture on it. You’ve surely passed this picking up the last two stars. Anyway, all 8 red coins are atop the puzzle. Just avoid falling into the lava.

From the start, you’ll see in the corner of the level opposite the start point to the right that there’s a wire fence. Work your way around the level – travel to the volcano, then the platform with two Bullies to the right, and then make your way to the platform. There’s a big log here. Run on the log, keeping your balance, to make it slide back closer to the star. Then hop to the platform and grab the star. You could also grab this with the Wing Cap, if you’re fast.

That volcano in the middle of the stage isn’t just a nice piece of scenery – it holds a hidden area! Jump into the center of the volcano. Inside, make your way across the islands in the lava to the right, and up the volcano. You’ll encounter bullies along the way, as well as other obstacles. You’ll then have to do some gymnastics, jumping pole to pole – and eventually, you’ll reach the top, where the star awaits.

Get back into the volcano. This time, look behind your start point – to the left. There’s an elevator platform here. It’ll take you up the volcano, with hazards to avoid along the way. Dodge them and grab the star the end of the tour.

Collecting 100 coins is quite easy here – there’s 97 yellow coins scattered around, plus the red coins, a handful of blue coins and a bunch that enemies drop on their defeat. This one shouldn’t take you long. Remember a lot of the yellow coins are inside the volcano!

If you haven’t had enough alliteration, the next stage on your list is Shifting Sand Land!