When you’re a twenty foot long tentacle monster, it’s tough to read a map. And that’s just one of the reasons why it’s so difficult to track down all of the Containment Units in Carrion.

Like many games in the Metroidvania-style, backtracking is essential in Carrion to find every secret power-up, and you’ll have to revisit multiple locations to crack open every Containment Unit.

There’s one Containment Unit in every area of Carrion, and they’re usually very inconspicuously hidden. Some are easier to spot than others, and most need you to deploy specific powers in quirky ways to clear a path.

Here’s where to find all of the Containment Unit locations in Carrion, as well as how to clear a path once you get there.

Carrion isn’t a long game, but it features a grand total of 9 Containment Units to uncover. Each one gives you an interesting new power to flesh out your monster’s moveset.

These can be things like giving you extra prehensile tentacles to capture unfortunate scientists with, or give your defensive abilities extra electrical juice.

Since you’re likely backtracking to find all of these, and since there’s no map with reference points, I’ve done the instructions starting from the signs that usually appear at the exit of each of the levels telling you how many of the save points and powers you’ve found inside.

The easiest way to get to each sign is by navigating through the Frontier, because you can use your late-game powers to open up new paths. 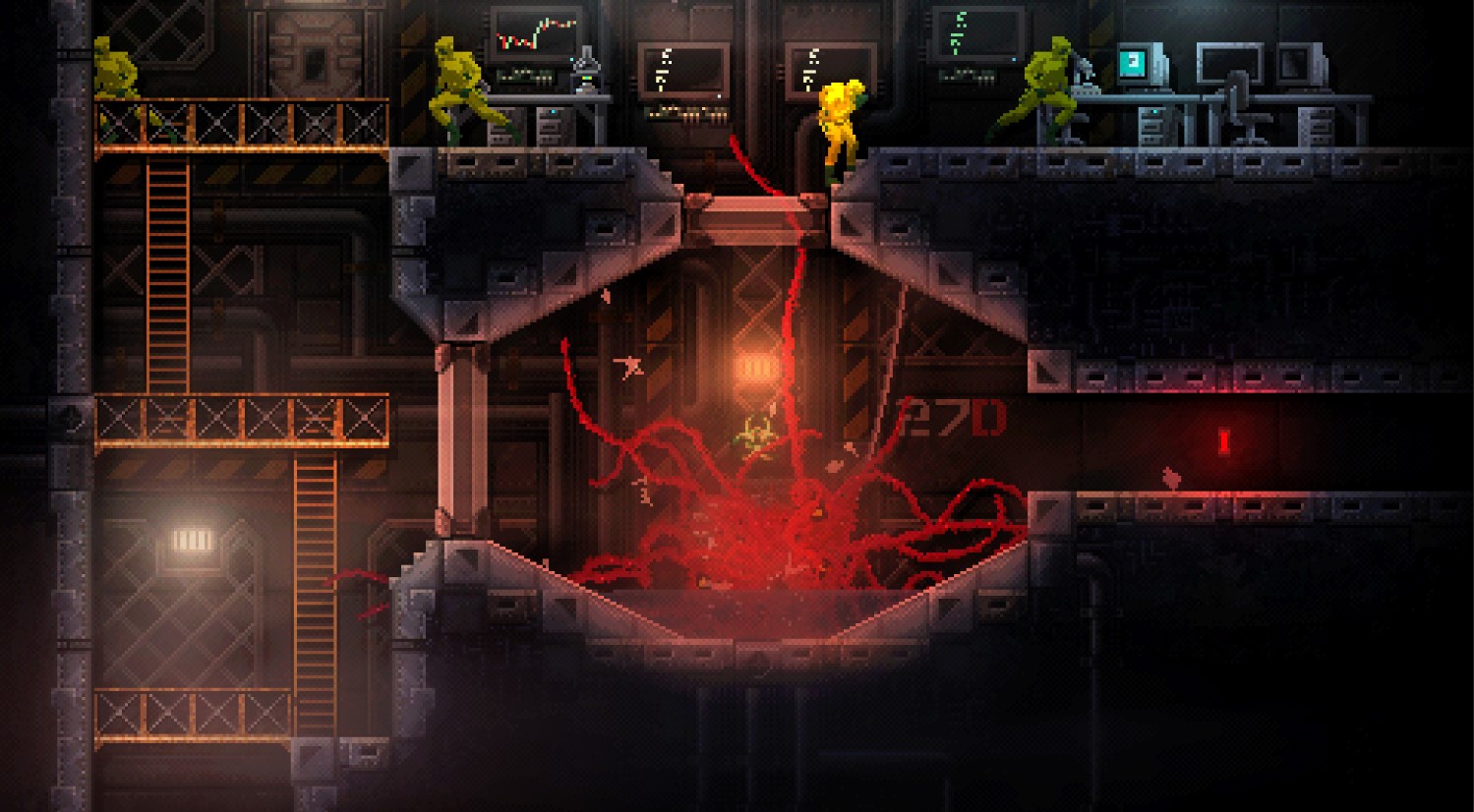 From the Military Junkyard sign, you’ll squeeze back to where you exited on your first run.

Go down the elevator shaft below you, then take a left. On the next screen, go left a little, then down past the save point on your right – this leads to the hazardous waste landfill.

Go right, then down through the one-way pipe. Then head right and squeeze through the door illuminated by the red light. 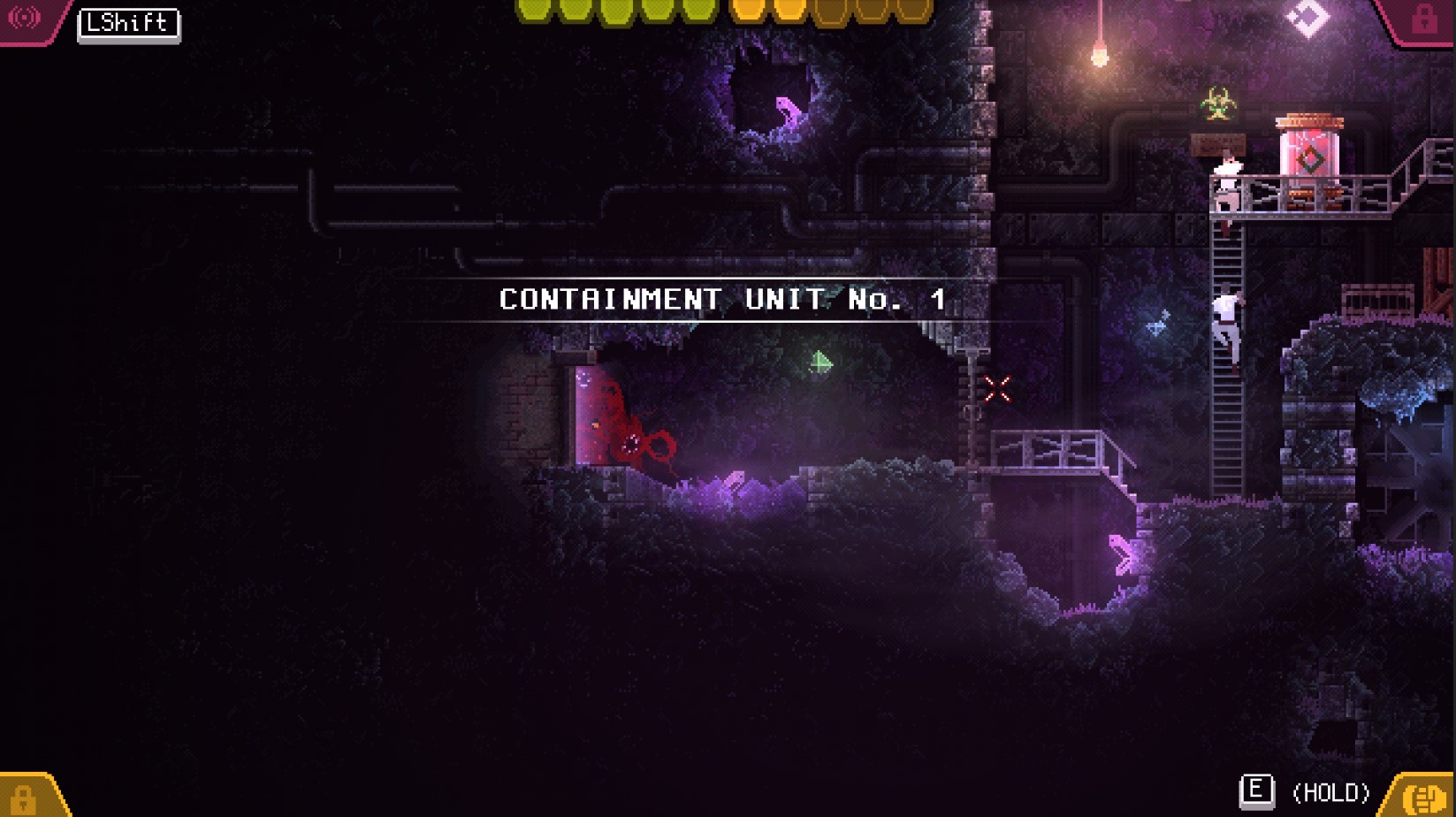 Now head up and you’ll see the door for the first Containment Unit on your left. Squeeze through and break the tank.

When you reach the Frontier Wastelands, where you find the BSL-4 Research Ward sign, go past the entrance to the ward – over and up to the right. 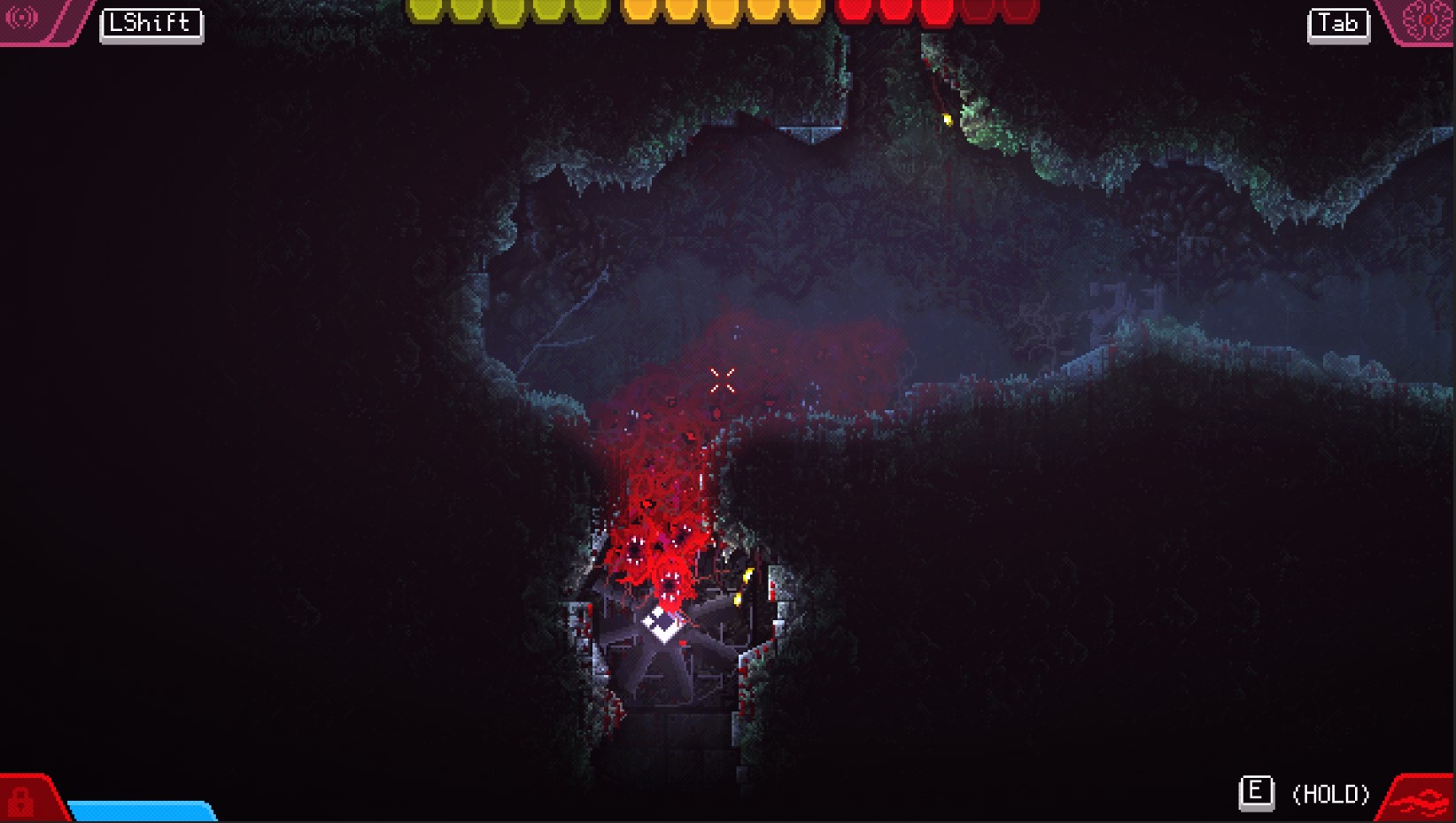 Go down the one-way pipe here and then head left. At the bottom of the screen you’ll see the Containment Unit symbol blocked by some wood. Break it to enter.

In the next screen, go through the door on the right to reach the Containment Unit, which you can break without solving any further puzzles.

From the Uranium Mines sign, enter, then go down, and down again on the next screen.

Next go over to the right, then look for some wood you can break on the right-hand wall.

Go down into the Containment Unit.

Head over to the left and pull the lever in front of you to take a look at the laser beams, then pull the panel off the energy recharge box above you.

Now slither all the way over to the left-hand side of the room and deposit two biomass so you can use your cloak and spider web abilities.

Then return to and pull the lever. You can now cloak through the laser beams, pausing to spider web shot through the gaps in the wall to recharge your cloak as you go.

Once you reach the other side without triggering the beams, you’ll be able to claim the Containment Unit Tank.

From the Botanical Gardens sign, enter, then head left to exit the room in the opposite direction from the green exit sign. 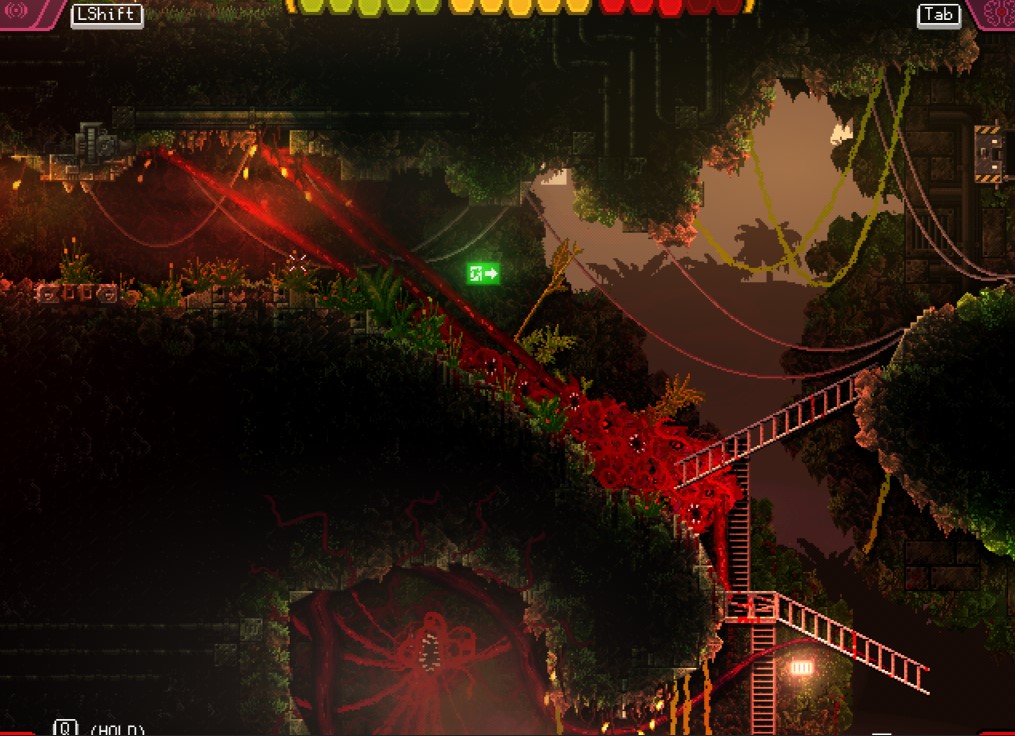 Then head down in the next room, before going down again and left to get to the Containment Unit entrance. To get past the locked barrier, go to where the save point is and slither through the small gap next to it. 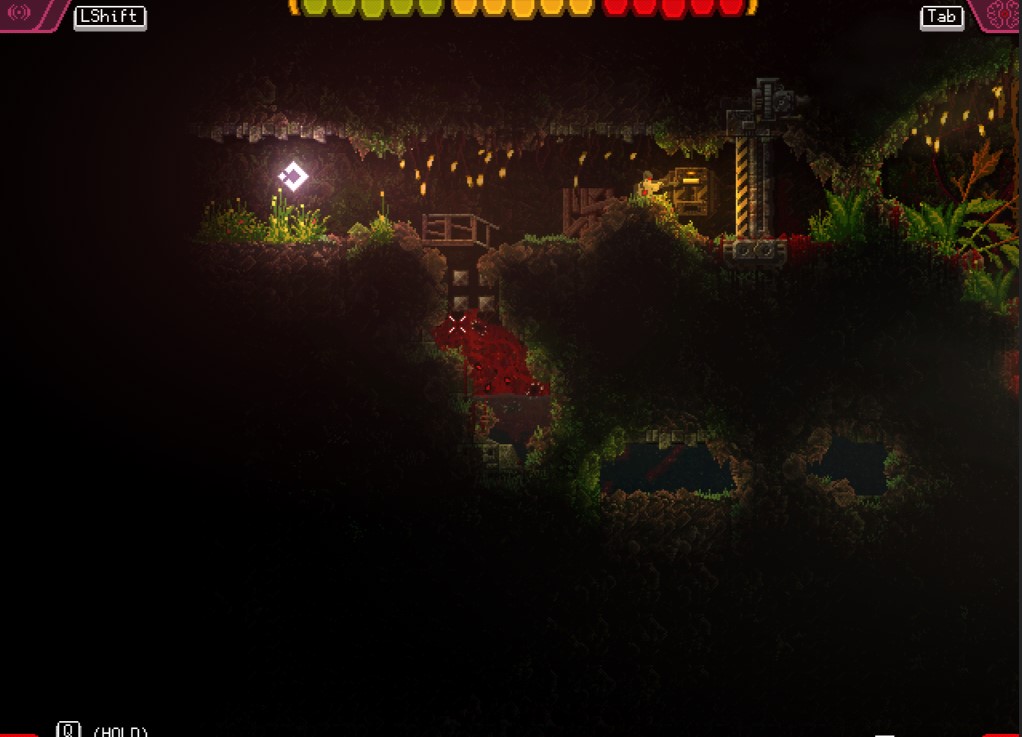 You’ll then be able to possess the wandering guard and open the gate.

To solve the puzzle inside, you need to walk this same guard around the room to have him open the gate. Possess him and climb down the ladders until he’s at the bottom of the room, then have the monster squeeze through the door and pull the lever. 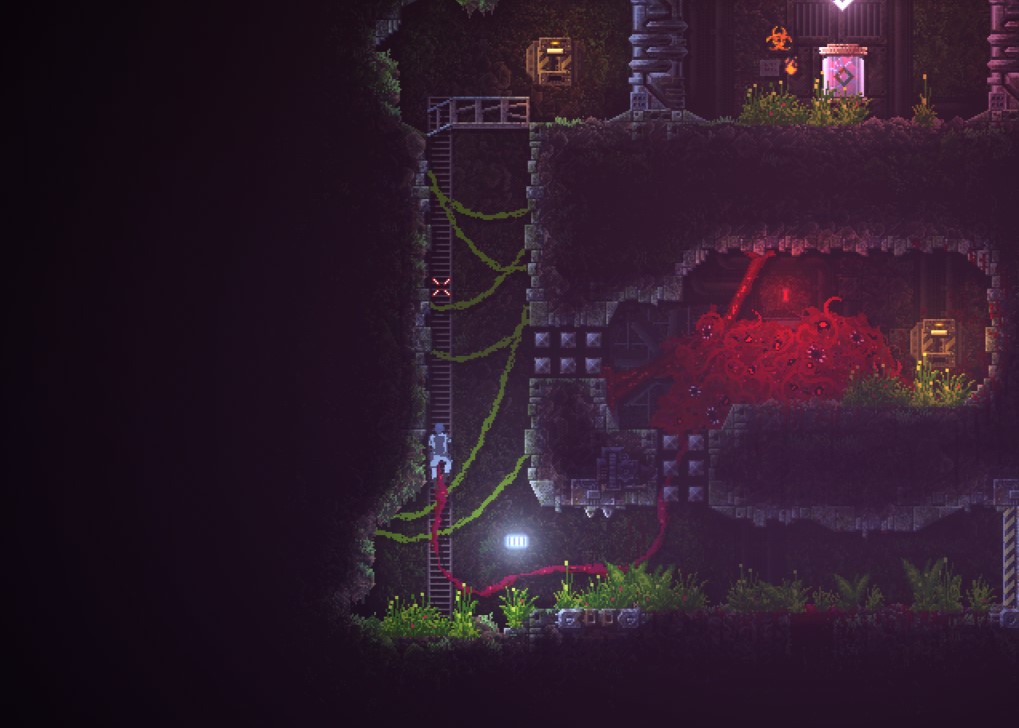 Possess the guard again through the gap and walk him to the next gate, then have the monster pull the lever again.

With the way clear, have the guard climb the ladder and pull the lever at the top, leaving you clear to claim the tank.

From the Leviathan Reef Base sign, go down and right into the watery area – then up.

In the corridor with the wavy green algae, go right, then pull the metal plug on the right out with your large monster’s offensive ability. 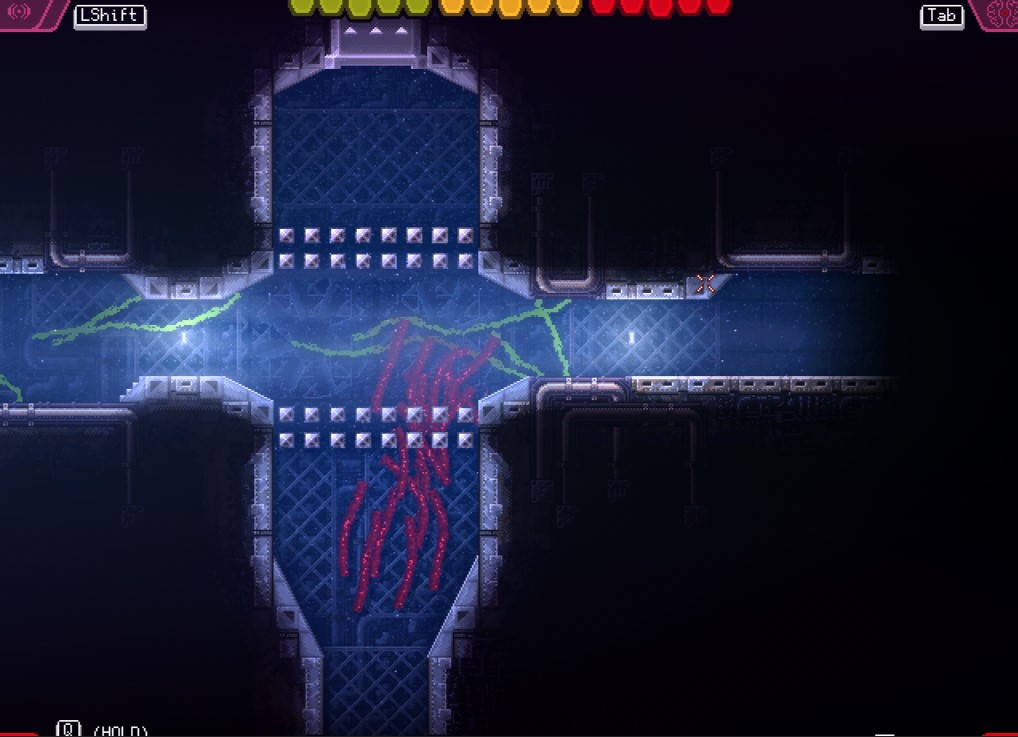 Follow the path to the right to get into the Containment Chamber. 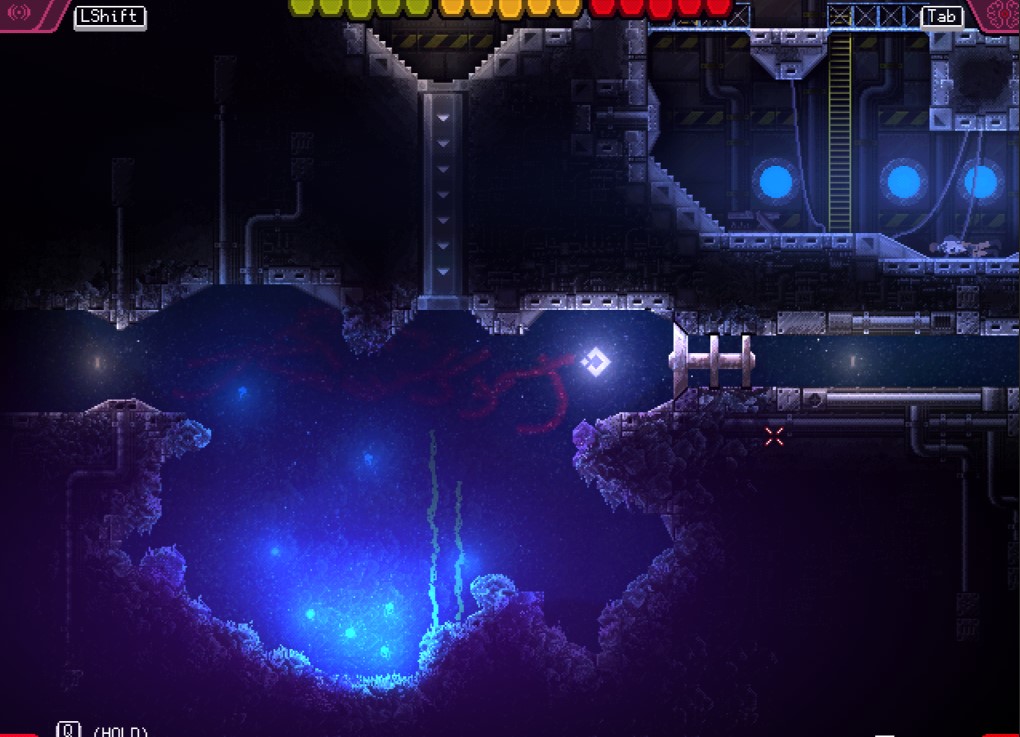 Swim over to the right and use your keratosis to protect yourself from the mine blast that you pick up along the way. Move quickly or you’ll be stuck with a second bomb.

Once you’re past, keep hugging that right wall and go up, pulling the lever through the one way pipe. 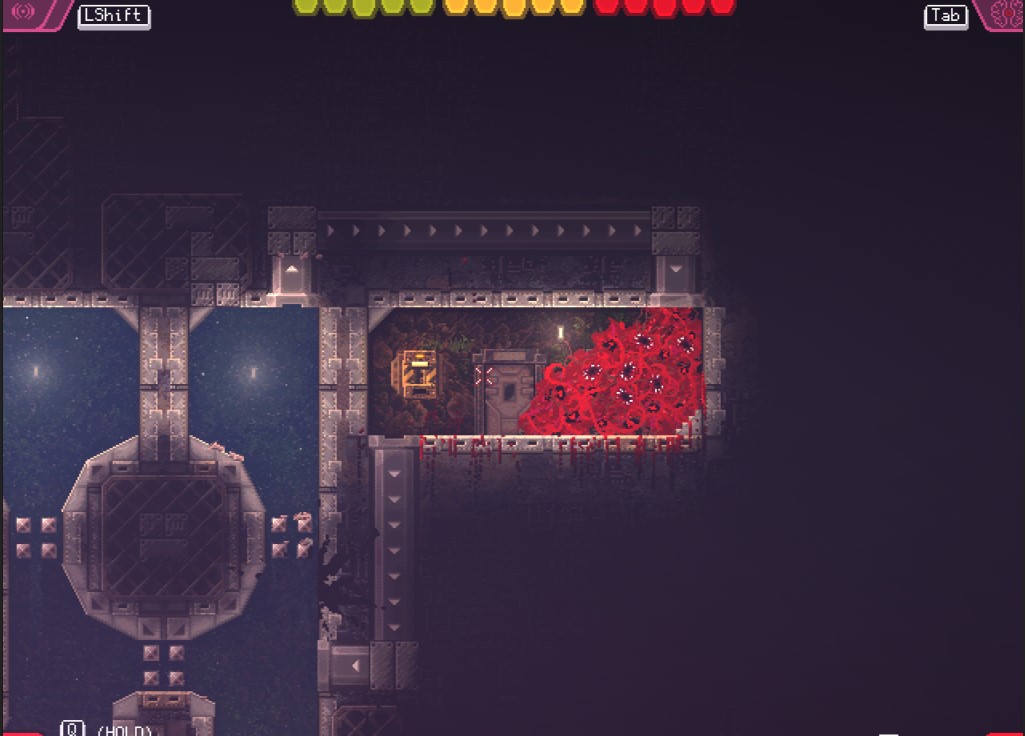 Exit that area through the other pipe and head left, then up to avoid the mine. Recharge your energy at the box above you, then return to the lever you pulled before to clear a path to recharge to get past the second mine.

Keratosis past the second mine, then return to the electrical box above to get your energy back.

You now have a clear run and enough energy to get past the third mine to get to the Containment Unit tank. 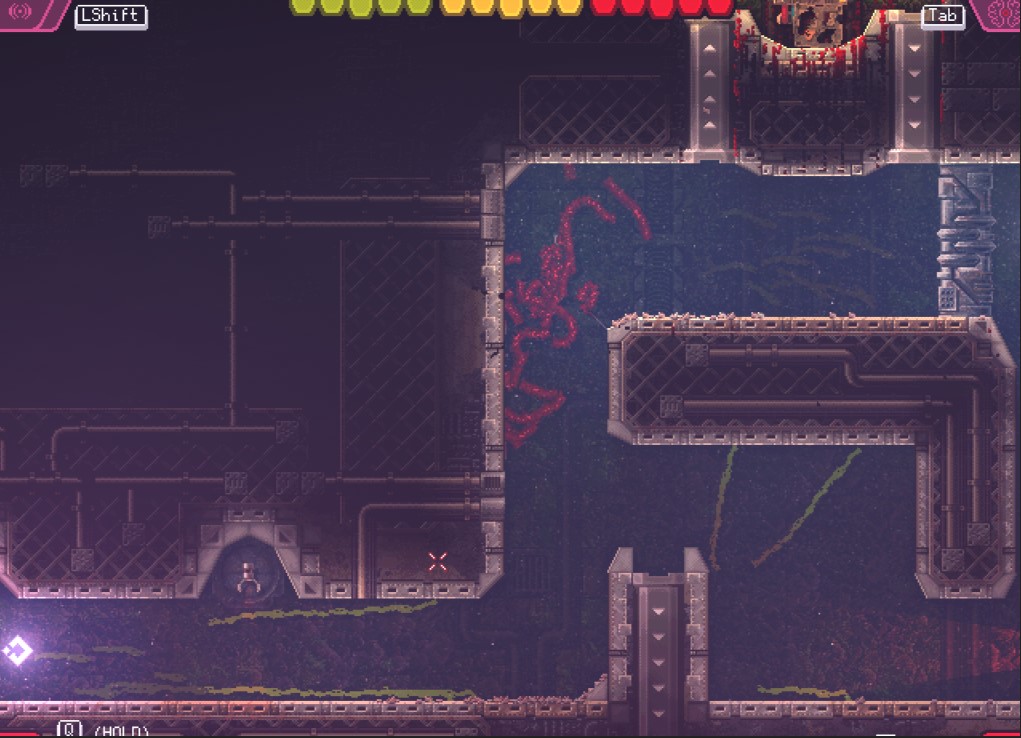 From the Relith Science HQ exit sign, look to your left, remove the grate and go through the one-way pipe into the thin tube of water below you. 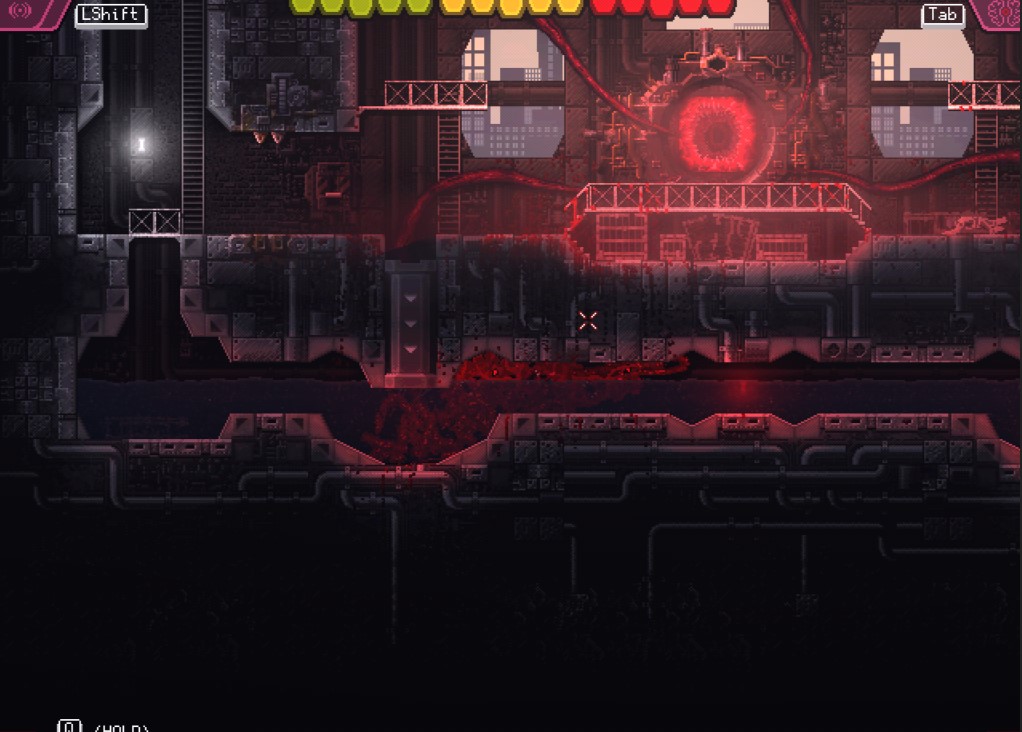 Follow the pipe all the way to the right and you’ll find the Containment Unit entrance blocked by a metal plug. Use your big boi pull to yank out the plug. 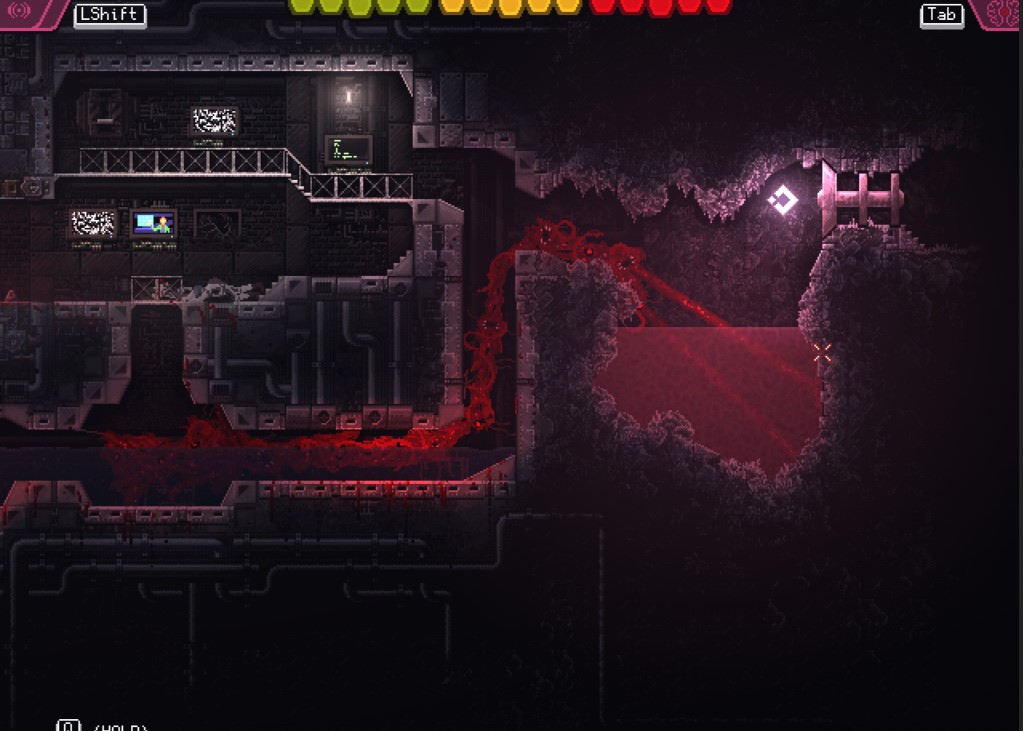 Before you enter, deposit two stages of your biomass in the pool next to the door. 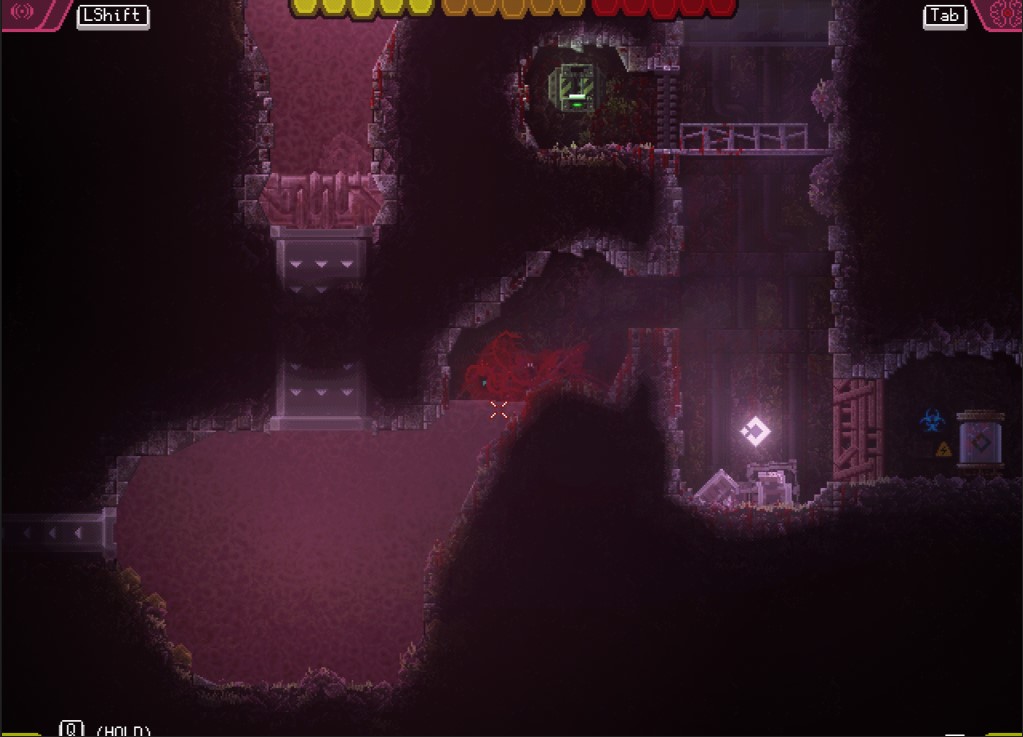 To get to the tank, rip out the railing on your left and go through the one-way tube on the left to get back out to where you deposited your biomass earlier.

Get one stage back, then go back into the Containment Unit. Deposit the biomass into the exposed pool below you. Cloak back through the laser, then pull the lever on the left to drop the biomass cocoon into the pool you can reach. 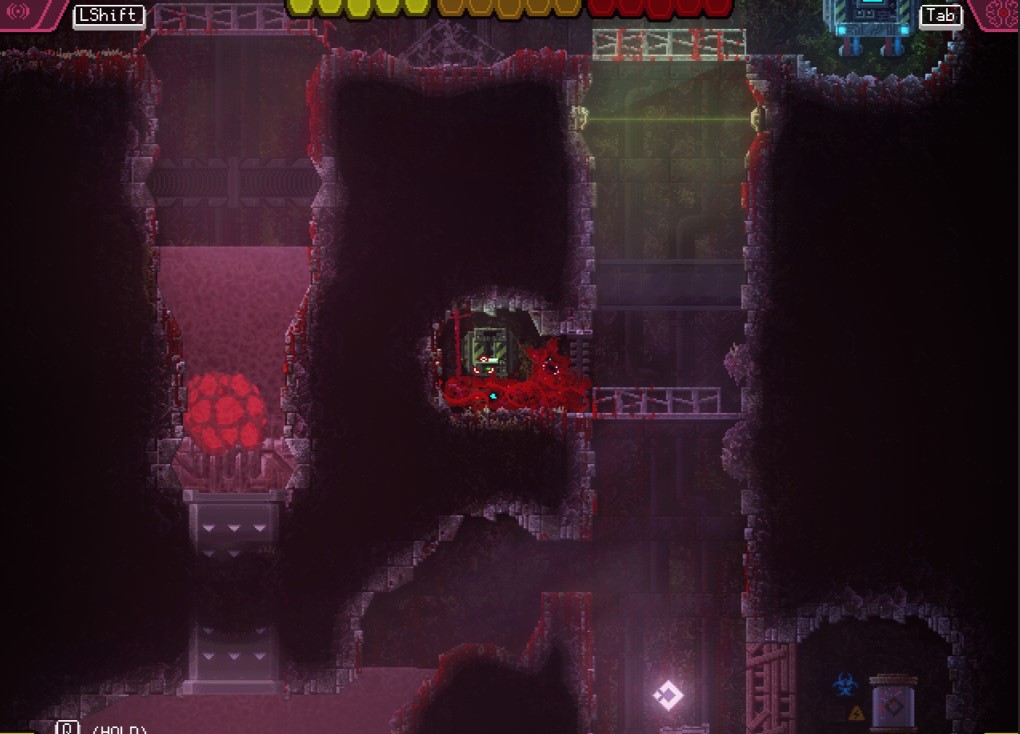 Eat it, then use your offensive ability to crush the wooden barrier in front of the tank.

From the Nuclear Power Plant Sign, go right, then down and to the left. 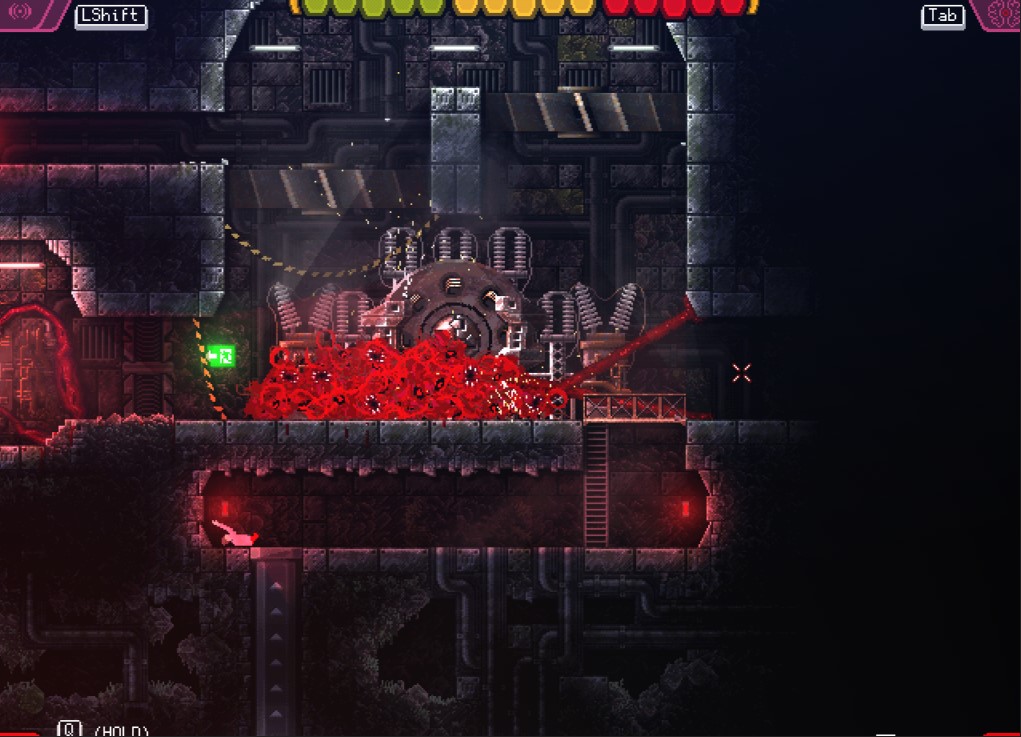 Then go left and down until you see a nook with three illuminated doors on your right. Go right here. 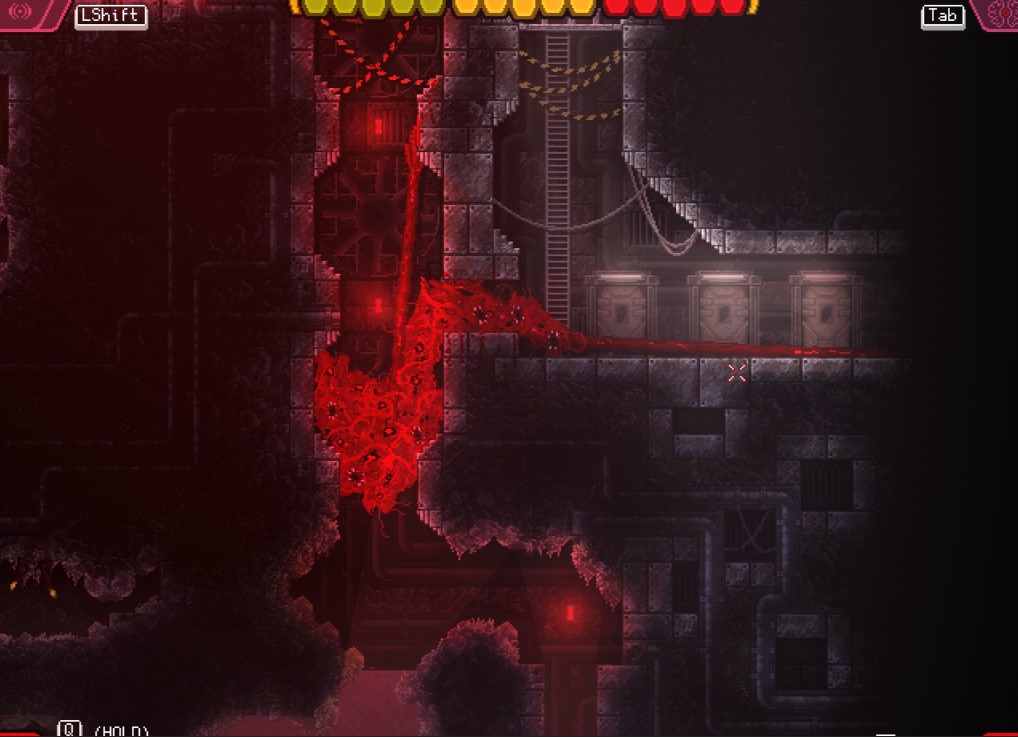 Pull the lever above you to clear a path, then hug the wall above you and exit the room on the right. 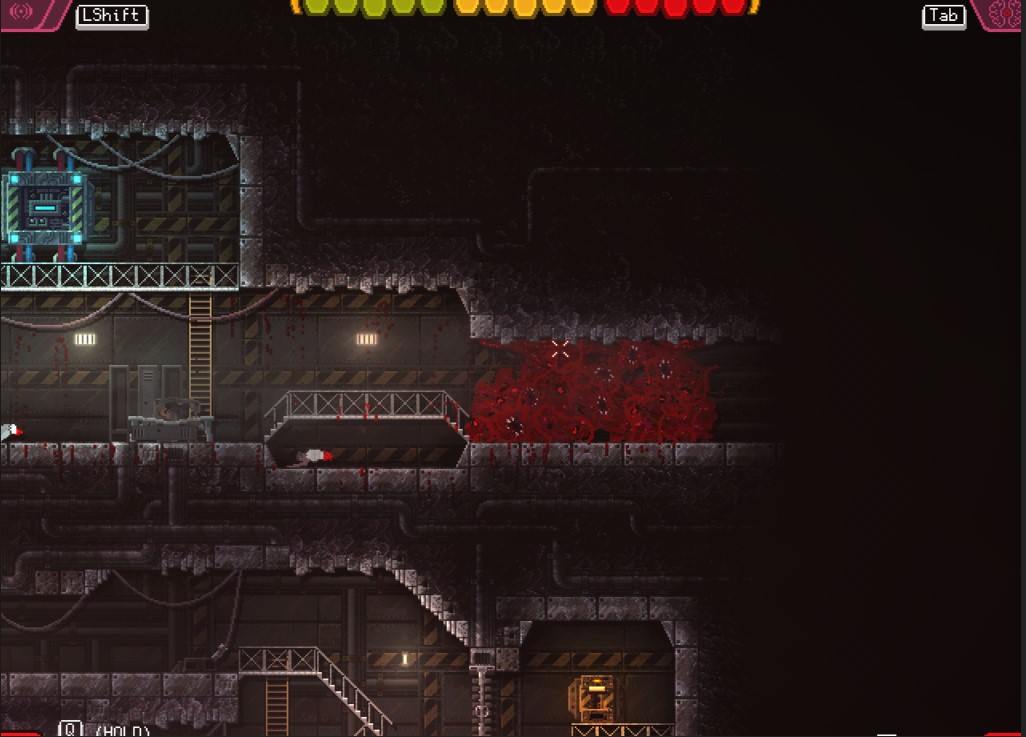 This lands you in a room with a pool and a metal plug below you. Yank out the plug and go through the pipe to find the Containment Unit on your right.

Watch out for the mine right by the door that you need to use Keratosis to get past.

Go down into the Containment Unit, rip off the panel to your left with the big offensive power, then return to the pool above and deposit two biomass.

To solve the puzzle, squeeze into the door by the entrance, then pull the lever. Cloak past the laser, then use psychokinesis to take over the brain of the wandering guard. 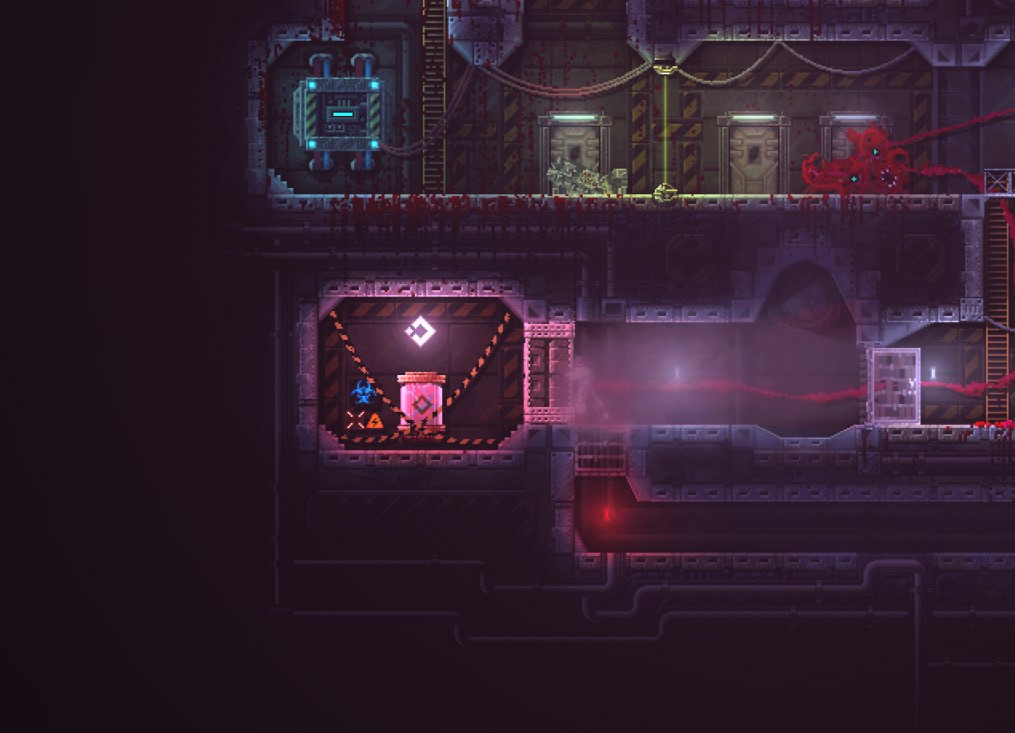 Walk him under the mine in the hallway to blow up the gate blocking the Containment Unit tank, then slither underneath the hallway to claim your prize.

From the Armoured Warfare Facility sign, you need to go up and grab a mine from the screen above, before bringing it down to blow up the gate on the right. 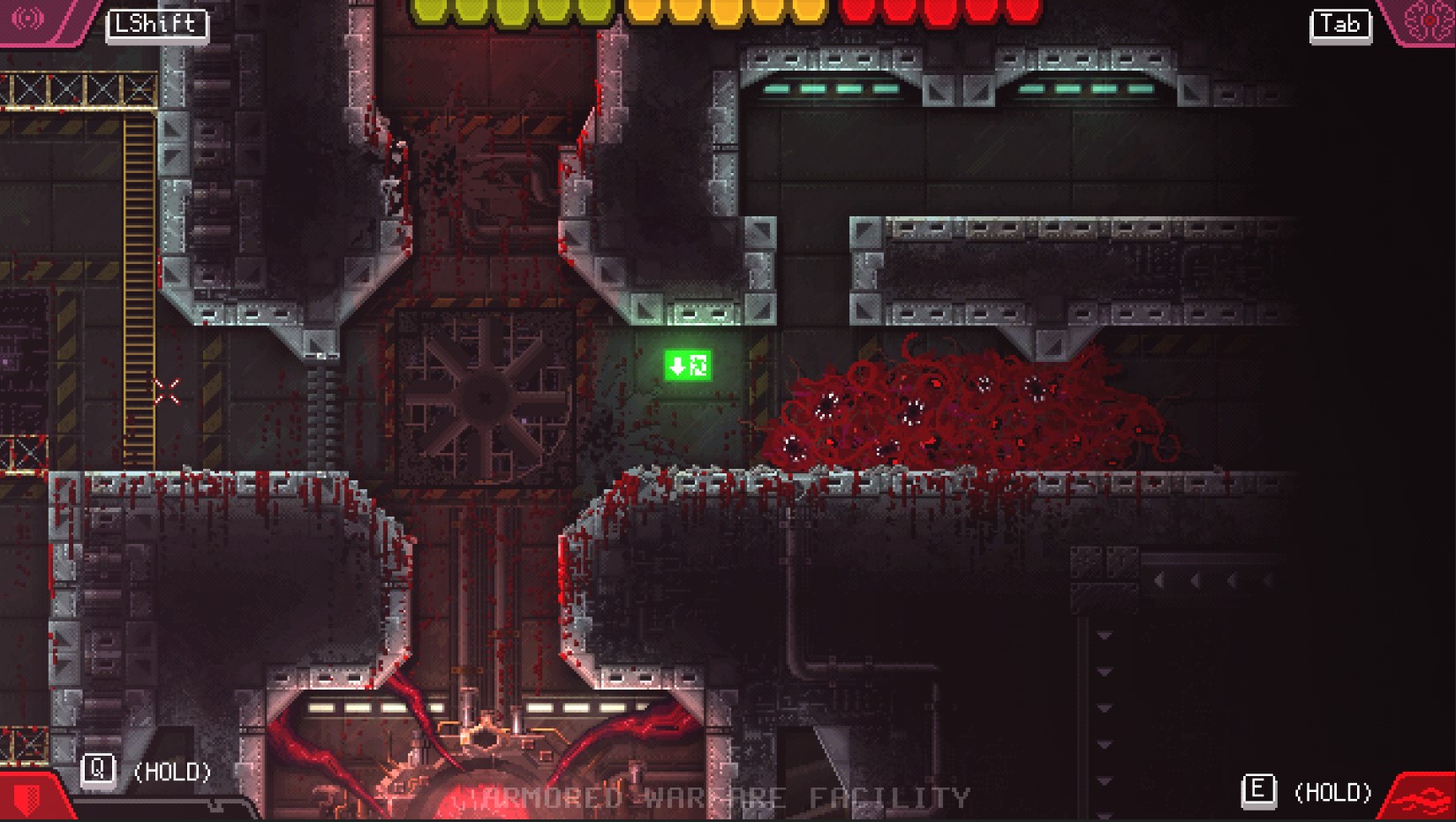 Once you’ve done that, the Containment Unit is through a door there. 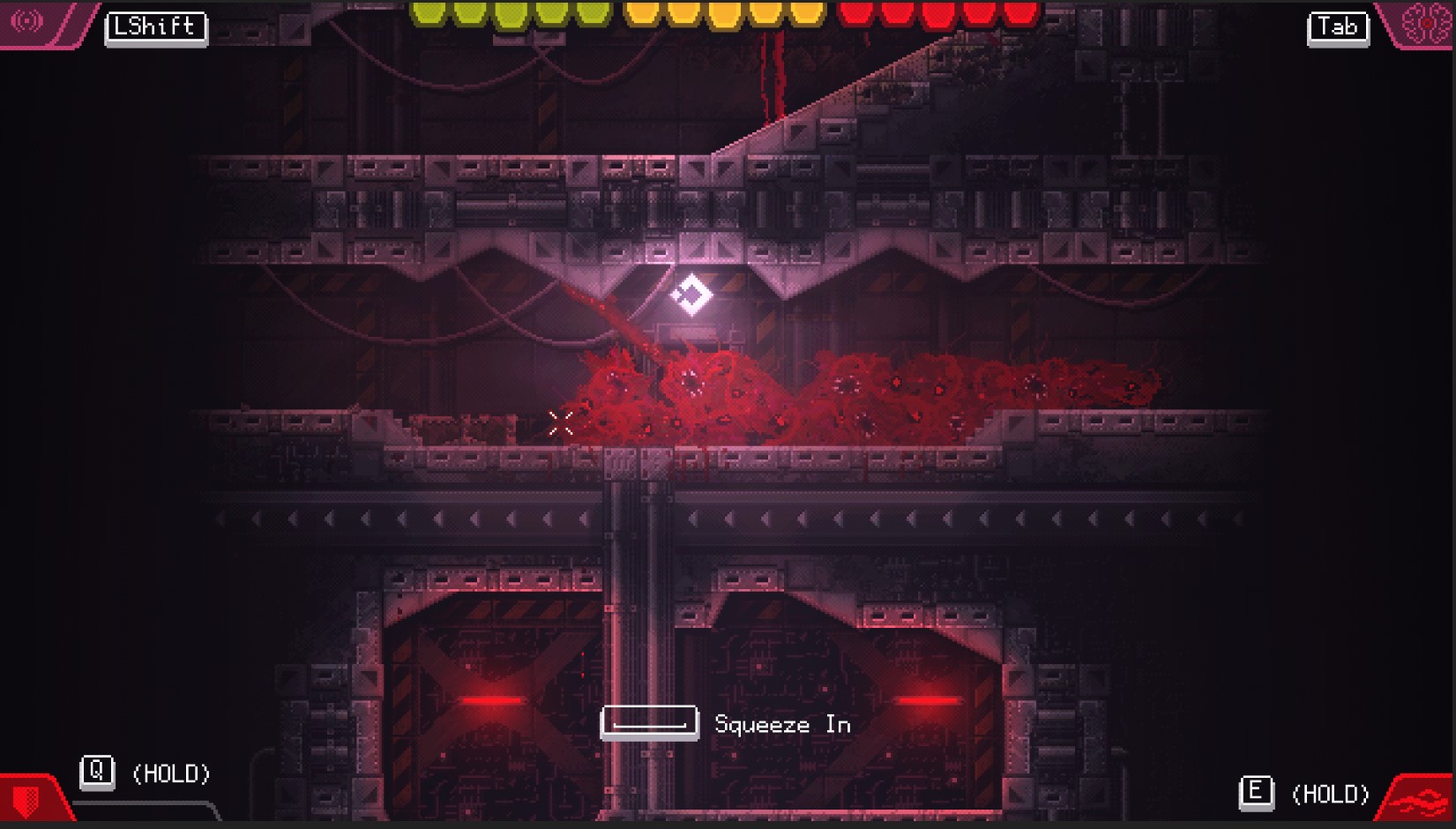 Since you solved a puzzle to get to the unit, there isn’t another inside.

From the Bunker sign, go left to the hub area to deposit biomass until you can use your cloak ability. Then return to where you entered, go right, and cloak past the laser beam.

Go down the first elevator, then maneuver around the next elevator shaft.

Now go past the nuclear generator and exit the screen down on the right.

Maneuver to get through the water-filled trench at the bottom of this screen, then go right, up, then right again. 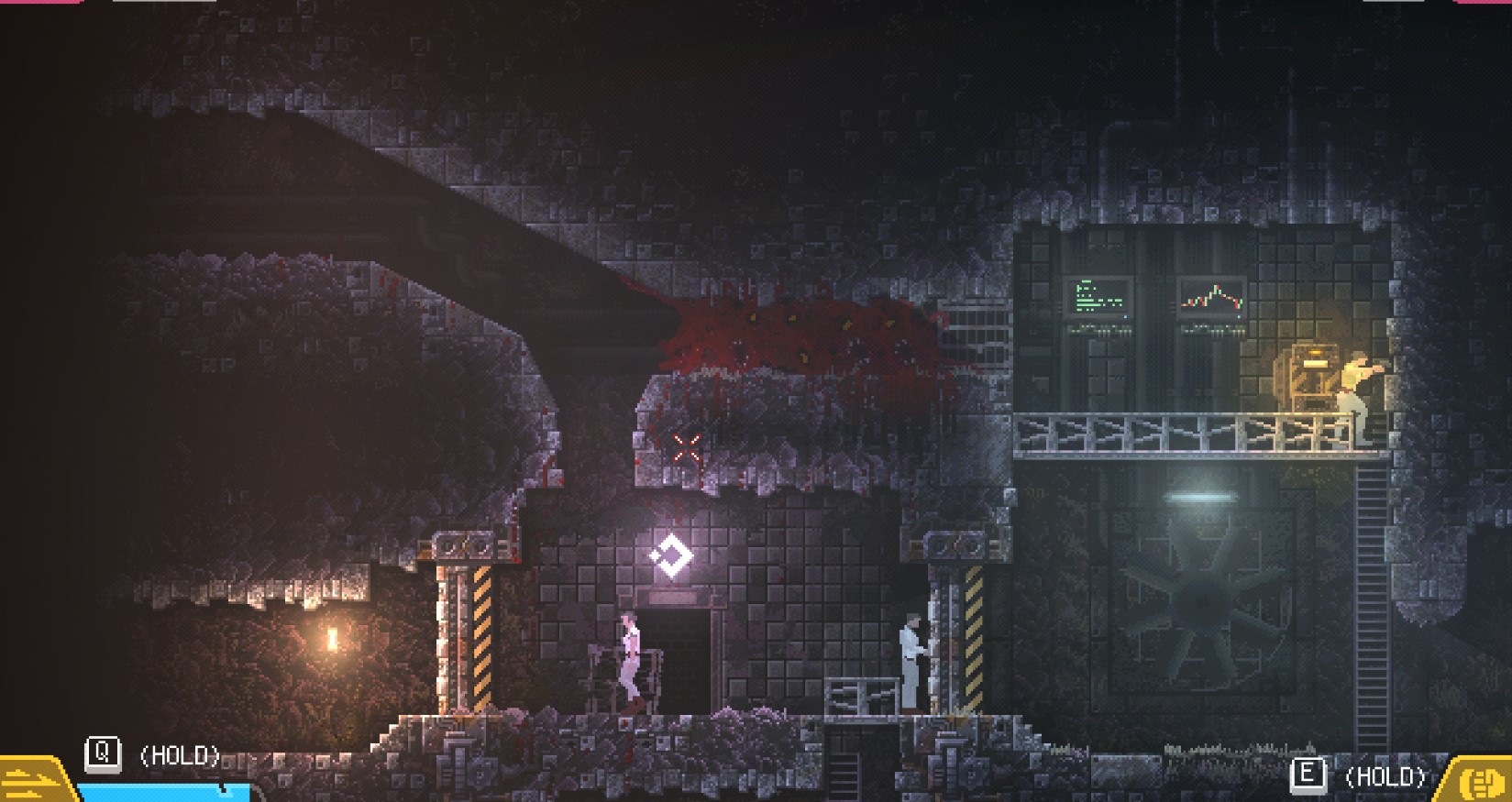 Squeeze through the door below you, and you’re in the last Containment Unit!

With all of the Containment Units broken, you should have access to the following extra powers:

For more help with Carrion, we have a FAQ page answering some of the more common questions we’ve seen about depositing biomass, getting through lasers, and electrical panels.