Spider’s Eye in the Dark bounty is back and you’re hunting a powerful Hive Shrieker this week.

This weekly bounty from Spider is one of the most challenging bounties in the Destiny 2: Forsaken playlist.

You’ll be heading to Hellas Basin on Mars to hunt down a Hive Shrieker as well as a tonne of adds along the way. I’d suggest bringing a shotgun with a fast reload or a machine gun like Thunderlord for crowd control. You can pull it off solo, though it’s easier playing in a fireteam as you can get overwhelmed by adds quite quickly.

You’ll need five Ghost Fragments to purchase the bounty from Spider, so take part in Public Events or search chests in the Tangled Shore to find them. 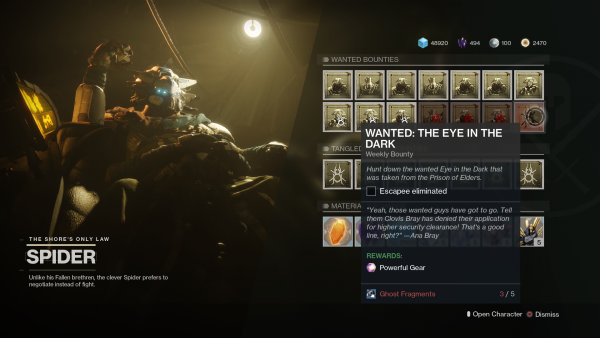 It’s important to note with Spider’s bounties that their locations can change each time when the bounty repeats. So while this mission will always be on Mars, it can shift to different Lost Sectors each time it appears.

Head over to the Braytech Futurescape area of Mars, or alternatively, head to Glacial Drift. You’ll find the Eye in the Dark adventure inside the Core Terminus Lost Sector, or outside of the cave West of Glacial Drift outside the Ma’adim Subterrane Lost Sector.

When you find the Eye, it will be closed and immune to attacks.

Once defeated, they spray green stuff everywhere, so get covered in it and focus on the Eye. It’ll close after taking a certain amount of damage and another wave of enemies will appear. Rinse and repeat this process a few times to complete the bounty.

The loot you’ll get from this will push you towards the 650 Power cap as it’s a challenging bounty. Season of the Drifter begins on March 5 and the Power cap is being lifted to 700, so it’s a good one to complete before the new Season arrives.

If you’re looking for more challenges, check out our Destiny 2: Forsaken guide.