There’s nothing quite like breaking the back of a role playing game’s progression, and Octopath Traveler is perfectly built for just that.

Over on our definitive VG247 Final Fantasy ranking, I listed Final Fantasy 8 as my fifth favourite entry in the series. I can honestly take or leave much of that game, but one particular element of FF8 stands out: how thoroughly broken it is. The first time you play FF8 you’ll probably play it as the developers intended, but once you know a little about the ins-and-outs of its character progression and difficulty, you can deliciously turn the game inside out within a few hours of kicking off a new save. It feels great.

Octopath Traveler is a sometimes hit-and-miss but ultimately satisfying Japanese RPG throwback, but in the aftermath of my review I’ve kept playing – and my primary reason for doing so is to find ways to manipulate its game systems to break Octopath’s open-ended progression as soon as possible. This is a great string for any RPG to add to its bow: the story is over, but I’m still at it. 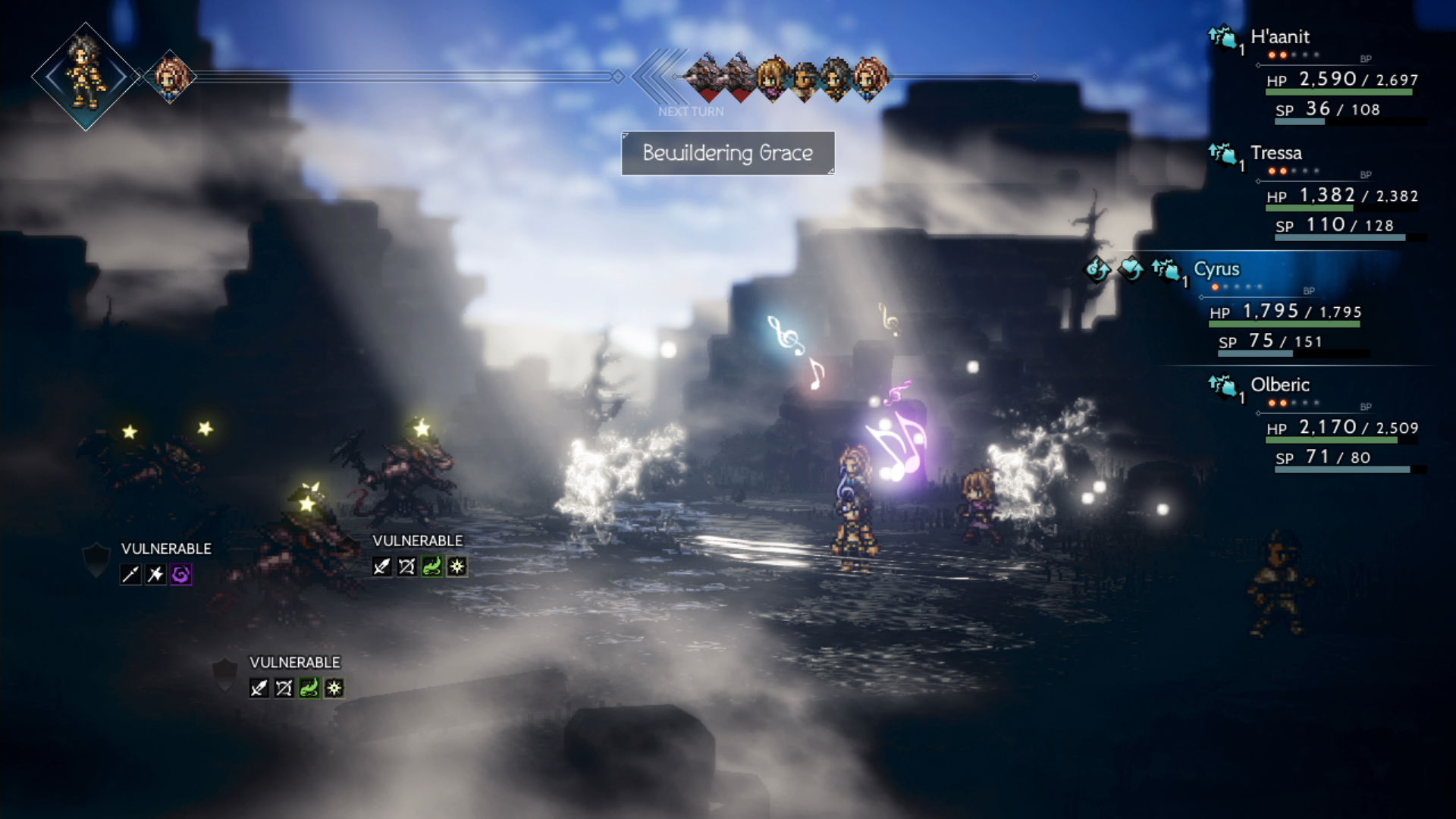 The structure of Octopath Traveler lends itself better to these sorts of shenanigans than most other games. It’s a massively open-ended game, allowing you to start with any of the eight playable party members, recruit them in any order and tackle each character’s storyline in any order you like. That means if you want you could take on all four chapters of one character back-to-back, or you could complete their chapter one before heading off to do some quests for other members of the cast.

Hidden among this is the brilliant Bewildering Dance ability, and my entire strategy for completely breaking a second play-through of Octopath Traveler all revolved around that. Limited to the Dancer class, at first only Primrose can have it, but later the dancer class can be equipped to a second character as well. Bewildering Dance is basically Japanese RPG Russian roulette: the dancer performs a dance, and that dance has a random effect.

The Bewildering Dance might kill you (so it’s prudent to save often using this technique), or it might buff or debuff enemies. It could deal damage. It could summon a Cait, the rare enemy that drops an absolute shed load of EXP, JP and cash. Best of all, it can multiply the resources you gain at the end of battle by as much as a hundred times – and these effects stack!

This goes absolutely crazy places – we’re talking jumping from level 10 or so to level 30-something in one jump, gaining tens of thousands of EXP and thousands of JP for buying skills. It led me down a path Japanese RPGs rarely manage to get me: I was happy to grind in search of the most impressively stacked Bewildering Dance bonuses. In the best case scenario you’ll summon a Cait, kill it, then trigger an EXP or JP bonus. The numbers get stupidly big. It’s a very satisfying thing indeed.

To come back to the FF8 analogy again, for those who remember that game’s systems, I was taken back to using card on the fish on the shores of the Balamb continent to massively overpower the game’s starting party. That’s some grinding I have extremely fond memories of, because the end result – a broken game where characters end up with a broad range of skills early on that can be used to basically speedrun towards late-game content – is worthwhile.

Yes, the random chance can be frustrating and the grinding out battles can be tedious, but it’s exciting – especially since Octopath Traveler’s open-ended structure means you can make a run for things like the hidden advanced classes as soon as you’re in a position to tackle the difficult bosses that guard them. Those bosses are worth rushing to on a repeat play, too – Octopath has an excellent combat system with a good amount of customization, so breaking the system to allow for experimentation with its eight characters and twelve character classes is an exciting thing indeed.