If you’re in the market for a new Nvidia video card, the company wants to give you The Crew 2 along with it.

Those who purchase a GTX 1080 or GTX 1080 Ti for or a qualifying desktop or laptop, Nvidia will hand them a copy of The Crew 2 standard edition.

To claim the free game, customers should ensure the seller is participating in the “Join The Crew” GeForce GTX bundle. Otherwise, Nvidia will be unable to provide download codes and coupons for purchases made through a non-participating retailer.

It also supports various driving wheels and joysticks depending upon platform.

Ubisoft announced PC configurations for the racing game back in mid-May.

To save you a bit of clicking, we’ve re-posted the minimum and recommended PC configurations for The Crew 2 below. 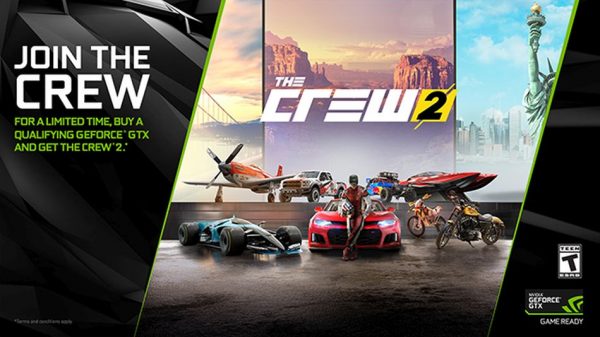 A closed beta for The Crew 2 was held over the weekend. The game will be released on June 29 after originally being slated for a March 16 release.