Quantic Dream’s latest game hasn’t had an easy time so far. Serious and shocking accusations of an unhealthy and bigoted studio culture surfaced earlier this year – strongly refuted by studio heads David Cage and Guillaume de Fondaumière – while some saw the game’s depiction of domestic violence in a Paris Games Week demo as normalising or even glamorising the issue. The Parisian studio must have looked at the Battlefront 2 loot box controversy with envy – after all, you can always turn microtransactions off.

It’s a shame that Detroit: Become Human arrives with such baggage in tow, because when viewed outside that context it looks very likely to be Quantic Dream’s best game to date.

The premise here is that you’re experiencing the future through the eyes of three different androids, Markus, Kara, and Connor, with contrasting roles in the new world but a shared experience of humanity’s discrimination against them. And that discrimination’s not just driven by a fear of the ‘other’.

The rise of the robots has hit the job market hard since companies installed androids in lower level positions across many industries. Unemployment rates are up to the mid-thirties. Then there are the deviants – androids gone rogue – perpetrating violent crimes throughout the eponymous city, suddenly awakened to human-like consciousness and compelled to revolt. As is the case with any major technological breakthrough, there were winners and losers when androids started rolling off the assembly line, and the losers hold a grudge. All of which is to say, walking through Detroit as an android is an uncomfortable experience. 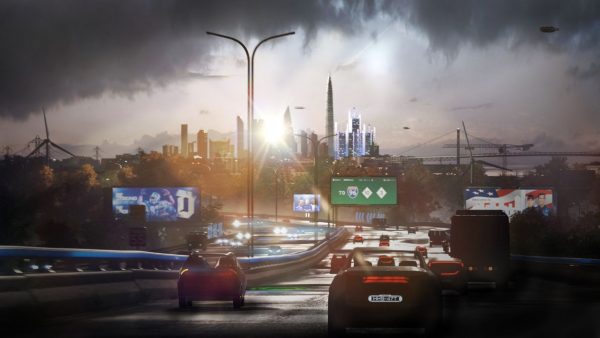 On the way to pick up some paints for his benevolent operator Carl (played by Lance Henriksen), Markus walks past a busker whose sign pointedly proclaims that he plays “real human music.” None of that soulless android garbage. People throw their trash at androids’ feet knowing they’ll pick it up without questioning. A runner treats his android as though it were a FitBit, there solely to spit out the stats of his run. There are protesters outside the Apple Store-like exterior of CyberLife, the company who manufactured this revolution. They call Markus ‘tin can’ and shove him around. After picking up the paints he waits at the designated android area of the bus stop, and sits in the designated android area of the bus. Returning home, he begins making breakfast for his operator and cleaning his house.

In that half-hour passage, Detroit: Become Human does what Quantic Dream games have always been best at: making you feel what it’s really like to be the character. To walk in their shoes, occupy yourself with their mundane tasks, and see the world through their eyes. Trying to entertain your estranged son after school in Heavy Rain; rushing around to make your home and yourself look presentable before a date in Beyond: Two Souls; running an errand for some paints in Detroit: Become Human – all fantastic exercises in empathy.

The same’s true of Kara’s introduction. Watching the world through her eyes, you’re stuck in place in a vaguely depressing android showroom, shoulder-to-shoulder with a few other models. A nice couple walks in and buys the one next to you. Then a salesman with an all-too-easy smile ushers someone your way. A man with a harsh stare and a surly way about him. You don’t want to go with him. He buys you anyway. Another game might have conveyed it in a cutscene, but Detroit puts you stock-still in the middle of it, knowing that being unable to move is anathema to every gamer. It wants you to squirm for a while.

Connor, the last of the game’s three playable characters, is the hardest to empathise with in his introductory chapter. Perhaps that’s intentional, since he’s a newer and more advanced android model than Markus and Kara, with observational and analytical skills well beyond any of his human colleagues in the police force. Nevertheless, he’s just as unwelcome in his world as the other two are in theirs. A woman breaks down into hysterical tears when she realises they didn’t send a “real” negotiator to the hostage crisis in her home. While he uses his superhuman vision (practically identical to the ‘focus mode’ from Tomb Raider, Hitman et al) to gather evidence and increase his odds of de-escalating the situation, human SWAT officers make very clear that they’d rather he wasn’t here. Before the subject of rebellion even becomes a narrative beat, you’re thinking about it as the player, because you’ve been subjected to such indignities and constraints. You’re not even allowed to cross the street or explore before your programming kicks in and throws up an impassable barrier. 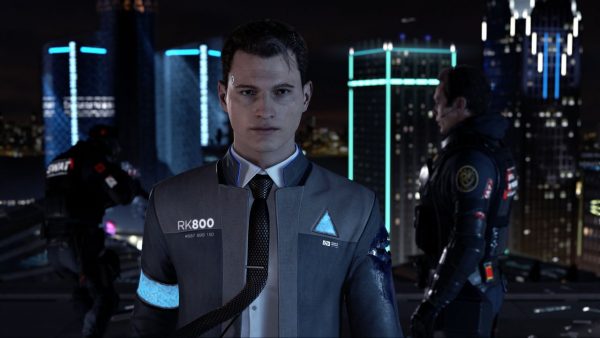 Quantic Dream intends for each character’s chapters to feel distinct, adopting different colour palettes and camerawork styles for each. Connor feels mechanically unique too, his intro serving as a gameplay tutorial more than Markus and Kara’s world-building debuts. By examining objects in minute detail Connor’s able to build up a sequence of events pertaining to a crime, which you play and rewind using R2 and L2, pausing and panning the camera around to look for now objects of interest. In the earliest example of this he pieces together the events that preceded a family’s android taking the father hostage at gunpoint on the edge of their high-rise apartment. The clearer a picture he has of prior events, the higher his chances of successfully defusing the situation.

That’s not an abstract concept, either: a percentage display literally increases and decreases depending on your actions. Maybe you placate the panicky android by telling him you know he was about to be replaced by a newer model. Perhaps you’re honest about the gun in your pocket and throw it aside. His features soften, his grip on the child loosening. But things can still go fatally wrong. Even increasing your success percentage to 99 isn’t a guarantee, and if you’re determined for it to go Pete Tong after that point it’s still possible to snatch a disastrous outcome from the jaws of success.

This high stakes opening scenario is handled well, supported by strong acting performances and excellent facial animation tech with real subtlety. But, as has always been the case in Quantic’s games, it’s the low key scenes that tell the story best. Prior to the now infamous scene in which Kara’s operator Todd becomes abusive to her and his daughter Alice, there’s a long, unbearably tense passage when you first enter his home and clean it up while he watches TV. You can see by the way he keeps the place – pizza boxes and bongs everywhere – that this isn’t Dad of the Year you’re working for. And you can tell he has a temper, too. He’s not trying very hard to hide it, growling at you for every interruption to the ice hockey game he’s watching. Carrying out these menial tasks for a man you instantly dislike, and getting a real sense of him by his possessions, makes Kara’s early gameplay even more uncomfortable than watching Markus being abused by protesters.

As for whether its depiction of domestic abuse should be condemned, really the only element differentiating Detroit from the numerous films and TV shows that have covered the same topic – often with far less restraint – is player agency. You’re not perpetrating the violent acts, but depending on your actions as Kara they can be avoided or triggered. Gamifying such horrific outcomes sounds tasteless when it’s isolated from its context, but the execution in-game is anything but throwaway. Nothing about it is being played for shock value, and the nature of Todd’s abuse towards Kara, along with its effect on his daughter, is examined from a sober perspective. The rest will come down to the court of public opinion. 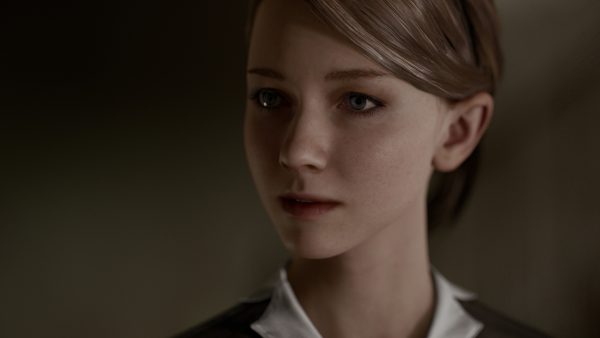 Quantic Dream wants to show you in real terms how your actions impacted the story, and to that end each chapter finishes with a flow chart of decisions and branching scenes. In the opening chapters these are fairly linear, but even so it’s easy to miss the odd interaction or conversation here and there. Later on, say the developers, these flow charts will show the complex foundations of the story and the many different directions you can take it with your minute-by-minute decisions. It’s possible, too, to dive back in at important junctures and make different decisions, altering the sequence of events to produce a different outcome.

Markus has woken up his operator Carl now. In the opulent surroundings afforded by a successful artist’s career, the two of them take breakfast and you see the first compassionate behaviour from a human towards an android. Carl’s keen to encourage Markus’ creative side, suggesting that he “find something to do” while he eats breakfast. It’s the first time you’re given any such freedom as any character thus far. Markus reads for a while, and when Carl asks him what he thinks about W.B. Yeats, he tells him that the poet was obviously in love. The irony of Lance ‘Bishop’ Henriksen providing a lone beacon of human warmth and compassion towards androids is surely not lost on Detroit’s audience.

It’s showing you that androids are capable of imagination – as is the following scene in which Carl sets Markus to painting “anything you like” – and adding a new layer of tragedy and complexity to Markus’ treatment downtown in the previous chapter. This isn’t just a machine reacting to stimulus and following protocols – it hurt his feelings to be called a tin can, and you learn that by watching him paint an abstract rather than frowning at the protesters.

Detroit’s success or failure will lie in how bravely it dares pursue those low key scenes, the ones most at odds with conventional game design. It’s what Quantic Dream does better than anyone else, attaching great meaning to small actions, and regardless of the circumstances in which the game itself releases, hopefully its themes and execution will resonate.