Nioh, one of this year’s best PS4 exclusives comes to PC, and I am both elated and frustrated.

From the first time I heard about it, Nioh always seemed like a game that would fit really well on PC. Months later, after three betas and a combined 50 hours of playtime in the launch PS4 version, I never actually expected to someday be playing it on a PC.

Sony’s marketing pre-release made sure the conversation was kept squarely about Nioh being a PS4 exclusive. Conveniently, a PC version was never hinted at by Koei Tecmo until the moment it was announced. The tactic worked, I suppose, and here we are, less than a year later with a PC release in a game-of-the-year-style Complete Edition.

The short time between announcement and release had me a bit worried about the state of the PC version, but it was the language of the press release that got me fearing another terrible PC port of a beloved Japanese game. In particular, the release mentioned that the two graphics options seen on PS4 – Cinematic, and Action – will return on PC. This was bizarre to hear, because one would assume – and expect – a standard resolution and graphics options screen on PC. Why would there be a need for a mode like that?

Having now played up to the game’s second area on PC, I am left relieved yet disappointed. The PC port is definitely not as horrible as I feared, but it also makes no attempts to be a better version than its PS4 sibling. 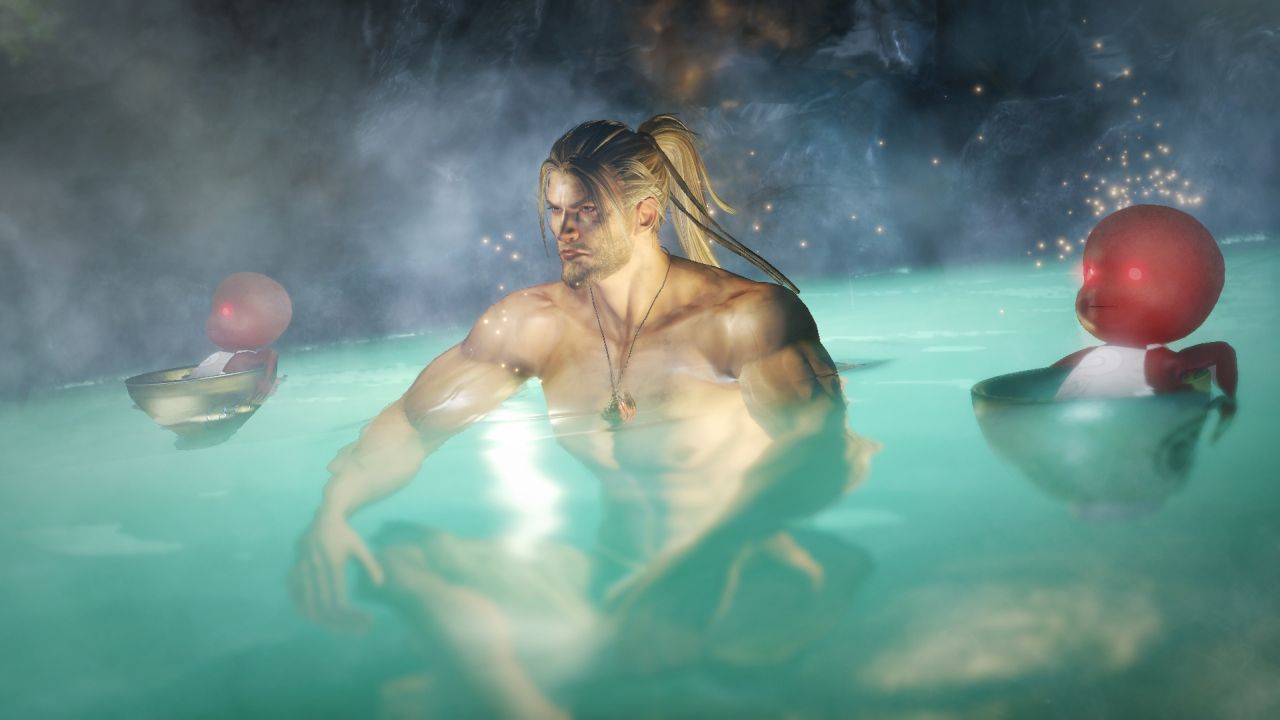 When you first start Nioh, you’ll be treated with a good ol’ launcher, which is the only way to change most settings. The launcher keeps the Cinematic, and Action presets first seen on PS4, but also offers a Custom option where you’re free to pick a resolution and adjust a couple of other graphics settings. Nioh does not support unlocked frame-rate, your choices are either a 30 or 60fps lock, regardless of the settings and resolution set.

The most puzzling item on that list is an option called Rendering Resolution that offers High, Medium, and Low. This is separate from Screen Resolution, and Nioh doesn’t explain what this, or any of the other settings for that matter, actually means. The only logical conclusion I could come up to was that this setting controlled the game’s actual internal – read: rendering – resolution, but therein lies another problem.

Because the High, Medium, and Low choices are vague at best, they mean different things depending on the Screen Resolution you picked. A couple of hours of mulling over a few dozen screenshots and the only constant I could find was that High always matches the chosen Screen Resolution. In other words, anything below High would be upsampling the image to your native resolution. There is no way to downsample. Without pixel counting, however, it’s hard to say for certain what Rendering Resolution actually does.

There are toggles for a few other effects, such as Ambient Occlusion, Camera Motion Blur, and Dynamic Reflections. Likewise, the game doesn’t say which AO tech it’s using. Nioh also doesn’t offer any form of discrete anti-aliasing, which made the process of determining the actual effect of Render Resolution even harder.

On first launch, I decided to push everything to the max possible values. That means a 4K resolution, with the rest of pack set to High. The game’s opening minutes have you escaping from a prison cell. As soon as cut-scenes ended (all capped at 30fps, by the way) and the game started, the frame-rate topped at 45fps.

Somehow, a PC running a GTX 1080ti and an i7 7600 was not good enough to render a small, empty room at 4K. As I navigated the rest of the level, it became clear that 30fps was going to be the average frame-rate for these settings. Dropping the resolution to 1440p and later to 1080p made things much more manageable. 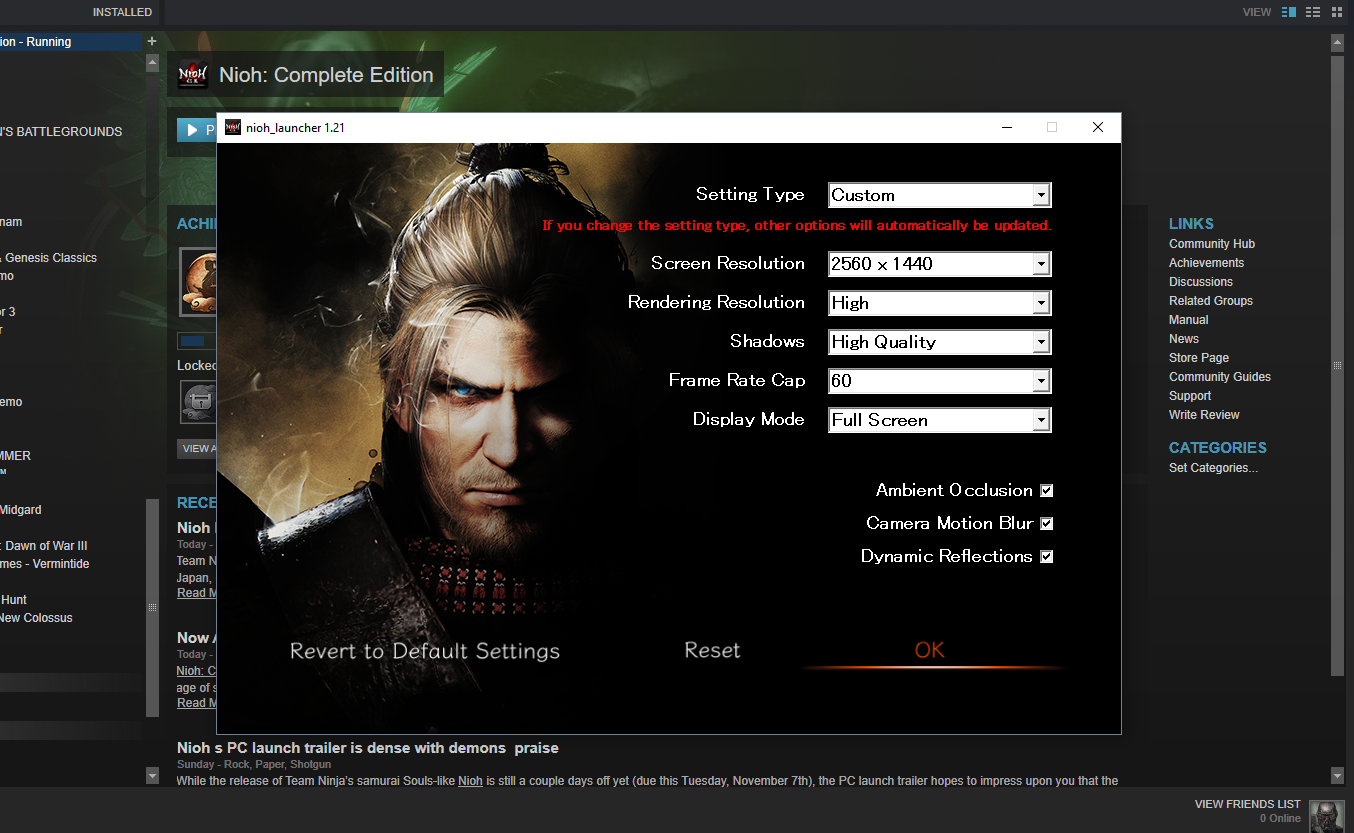 4K 60fps can be achieved on a similar setup, but you’ll have to turn off Ambient Occlusion, and set Shadows to Medium.

For the remainder of my time with the game, I kept it at 1440p since there wasn’t much of a difference in performance compared to 1080p. Which brings me to the next point; Nioh’s PC performance is almost identical to PS4. With 60fps as the cap, the game rarely drops below that even in open spaces and with lots of enemies.

It does drop, however, but you can tell it’s loading in the next part of the level. I remember these hitches pretty well from my time with the PS4 version, because the drops happened in nearly the same spots, leading me to believe it was more of an engine limitation than anything else.

Once again, enemies far away have fewer frames of animations to maintain a steady frame-rate. It’s a trick used by other games such as Halo 5, and Dark Souls to a lesser extent. These enemies are typically out of the frame most of the time, and so the drop in quality was never distracting.

Though performance is comparable between PC and console, the power of the PC will simply be enough to brute-force its way out of dynamic resolutions. The game’s Action mode only reached a maximum of 1080p 60fps on PS4 Pro, according to Digital Foundry’s analysis at the time, so you are getting an upgrade, so long as your PC can power through.

If you manage a locked 60fps in the game’s opening London level, it’s safe to assume you’ll be seeing identical performance for the rest of the game. Most of your time in Nioh will be spent indoors. From castle halls, claustrophobic dungeons, to the Ninja clan hideout later on – all environments that are decidedly small. Even when the game does open up a bit, a lot of your peripheral vision will be taken up by trees and a smart fog effect that hides objects in the distance.

The end result is a game that maintains 60fps the majority of the time. If you fear your PC can’t handle a native resolution all of the time, the Action mode will help. It drops the resolution to keep up with the 60fps target. On the other hand, Cinematic is your go-to if you want a better looking version, capped at 30fps.

Unfortunately, these caps cannot be changed once you’ve selected either mode. What’s really disappointing here is that Nioh is not a good looking game. It’s serviceable, but you’ll definitely be asking yourself why your PC can handle other graphical showcases much better than it does with this one. 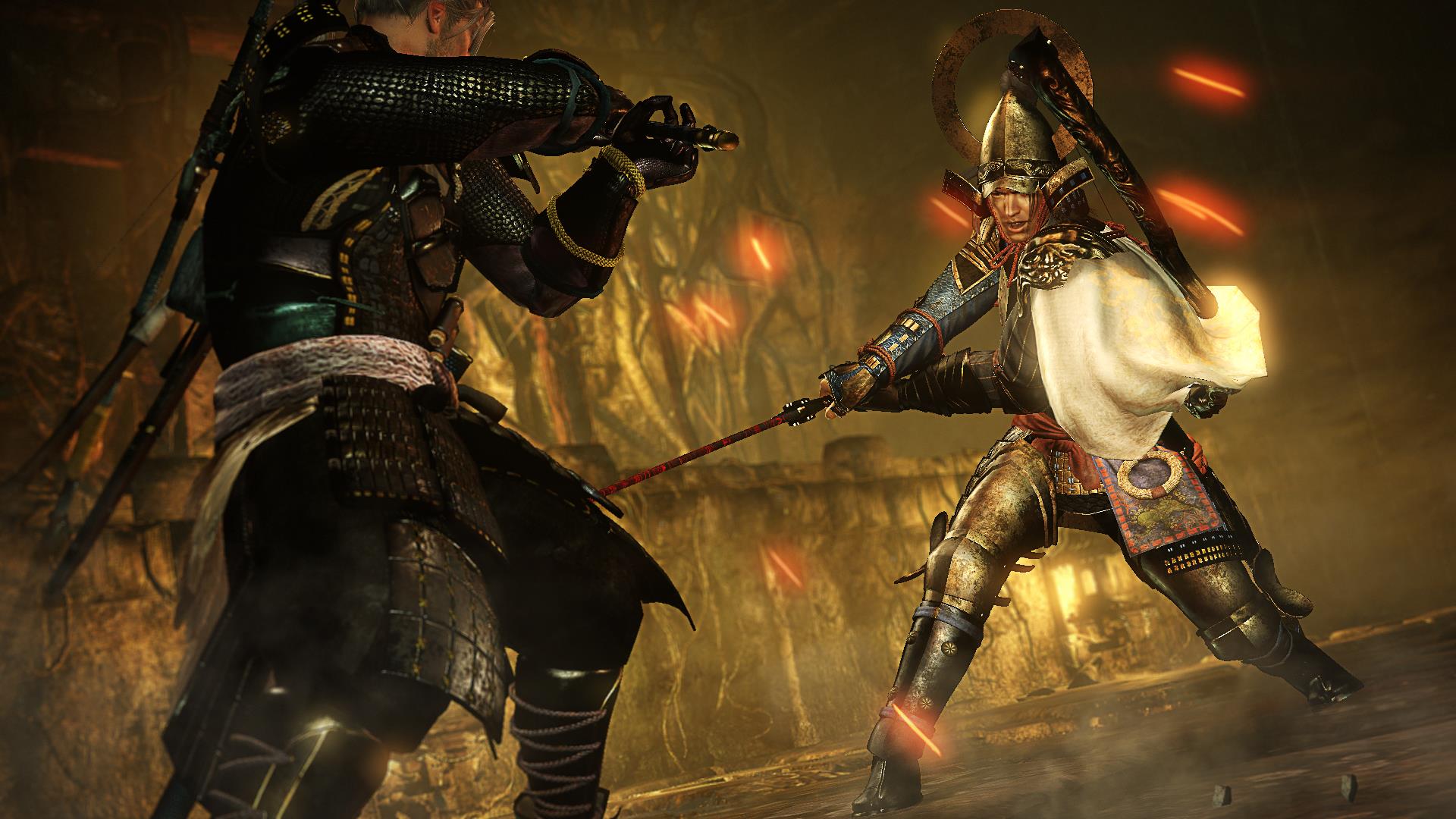 Rounding-up the list of disappointing omissions is a lack of mouse and keyboard support. The game doesn’t even recognise mouse input, not in the main menu, and definitely not during gameplay. You can navigate the main menu with a keyboard, but confirm – typically mapped to Enter, defaults to E, and return – always mapped to Escape, is mapped to Q. It really gives away how much development time was put into keyboard and mouse controls.

You can definitely move William using the WASD keys, but good luck trying to a) figure out which keys attacks are mapped to, and b) actually play the game that way.

Using a controller is the only way to play Nioh, and the game thankfully works as you’d expect beyond that point. It’s also worth mentioning that Nioh will take up nearly 74GB on your drive, despite the download being just 29GB. Load times are fast enough on a mechanical drive, though, so there’s no need to free up SSD space.

Nioh is one of few RPGs with near-perfect combat mechanics. Its unique take on the Souls formula is exhilarating at first glance, and later reveals incredible depth by adding a combo system into the mix. The stance system is impeccable, and simply elevates the action to a level not seen in any other game of this type. I dare say these mechanics are more engaging than even Bloodborne’s, the Souls game whose combat it most closely resembles.

The PC platform is starved for this type of game. Sure, you have all three Dark Souls games, but other, equally essential entries like Bloodborne, and Demon’s Souls are missing. Even Team Ninja’s classic Ninja Gaiden is nowhere to be found on PC. For these reasons, it’s worth putting up with the port’s shortcomings.

Ultimately, the PC version of Nioh is the very definition of functional. It works well enough that you can enjoy your time with it, but it’s unremarkable everywhere that matters.

Nioh: Complete Edition is out now on PC.