A few folks weren’t too pleased with the Wolfenstein 2: The New Colossus Twitter account over a “Make America Nazi-Free Again” tweet – even though that’s what players will be doing in the game.

People getting upset over something posted on social media isn’t anything new or rare. Yet, apparently there were enough folks taking umbrage over the Wolfenstein tweet and it’s use of the NoMoreNazis hashtag to warrant a statement from Bethesda.

The Wolfenstein franchise has been around for “over 20 years,” 36 to be exact (1981), and Nazis have always been the enemy. Wolfenstein 2: The New Colossus is no exception. However, the current political climate has drawn many worldwide who support National Socialism to social media and to the forefront of world news. Many who support a white supremacist or Nazi ideology have found this a rather safe, online home thanks to anonymity.

These are the folks who are upset over the tweet. All you have to do us look at the comments and see for yourself.

Pete Hines, VP for PR and marketing at Bethesda spoke to GI.biz regarding the Wolfenstein 2 tweet and the firm’s marketing approach to The New Colossus. 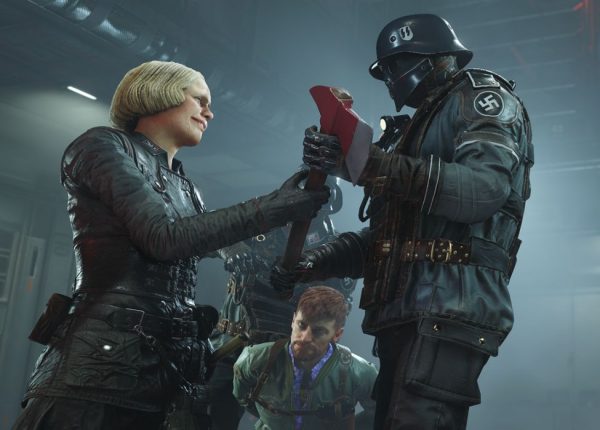 “We’re certainly aware of current events in America and how they relate to some of the themes in Wolfenstein 2,” said Hines. “Wolfenstein has been a decidedly anti-Nazi series since the first release more than 20 years ago.

“We aren’t going to shy away from what the game is about. We don’t feel it’s a reach for us to say Nazis are bad and un-American, and we’re not worried about being on the right side of history here.

“[In the game] freeing America is the first step to freeing the world, so the idea of #NoMoreNazis in America is, in fact, what the entire game (and franchise) is about. Our campaign leans into that sentiment, and it unfortunately happens to highlight current events in the real world.”

In Wolfenstein 2: The New Colossus, the Nazis won World War 2 and almost the entire world is under Nazi control come 1961. The game’s hero, BJ Blazkowicz, sets out take the country back by rallying the resistance, and liberate the rest of the world in the process.

Development on Wolfenstein 2 began in 2014, soon after the release of The New Order, three years before neo-Nazi and neo-Nazi subgroups in the US, emboldened by the current political climate, marched in Charlottesville, VA causing a planned rally in Charlotte, NC to be cancelled.

The US is where Wolfenstein 2 takes place, and this was part of the plan since development on the trilogy started. Despite this, the #NoMoreNazis tagline in the tweet caused a bit of a ruckus with those who felt such ideology was being attacked without provocation.

“In Wolfenstein’s case, it’s pure coincidence that Nazis are marching in the streets of America this year. And it’s disturbing that the game can be considered a controversial political statement at all, Hines told GI.biz.

While he feels the game’s subject matter could alienate potential customers, it’s highly likely they wouldn’t have purchased it anyway.

“People who are against freeing the world from the hate and murder of a Nazi regime probably aren’t interested in playing Wolfenstein,” he said. “This is what our game is about. It’s what this franchise has always been about. We aren’t afraid to embrace what BJ stands for and what Wolfenstein represents.

“When it comes to Nazis, you can put us down in the ‘against’ column.”

Wolfenstein 2: The New Colossus will release for PC, PS4, and Xbox One October 27. Switch owners can pick it up in 2018.