A tiny little eight-dollar fighting game is causing quite a stir.

Indie brawler Fight of Gods has caused the Malaysian Government’s Malaysian Communications and Multimedia Commission (MCMC) department to take a swipe at Steam, denying their citizens access to the Steam store through a blanket, country-wide ban of the Steam Store in reaction to the game.

Fight of Gods seems pretty silly, really – it stars various god-type characters from all sorts of mythologies. That goes for video game staples like Zeus, Odin, Amaterasu and Anubis, but also features the likes of Moses, Jesus and Buddha, and that’s where the sticking point with Malaysia’s government is according to a report from Lowyat.

Malaysian users on enormous gaming forum NeoGAF are also reporting Steam is blocked on their PCs but also even via mobile phone.

The game debuted a trailer featuring Jesus this week to mark it’s launch onto Steam early access. That caused quite a stir, with mainstream media outlets gleefully reporting Jesus’ addition to the game, with his deadpan fight introduction voiceover of “I’m back, for the people.” He then rips himself off his cross and uses the remaining wood to beat people with rekka-style moves like Street Fighter’s Fei Long. No, really.

Another, earlier report from Lowyat claims that the Malaysian Government contacted Valve and requested that they block Fight of Gods for Malaysian steam users before any further action is taken. It seems Valve wasn’t quick enough.

In the wake of the Jesus trailer I did pick up and give Fight of Gods a little play because I really do like fighting games that much, and it seems like a standard-issue low-rent indie fighter with broken combos, for the record. It does give you the chance to tell a rival to “try that on my Jesus”, mind. 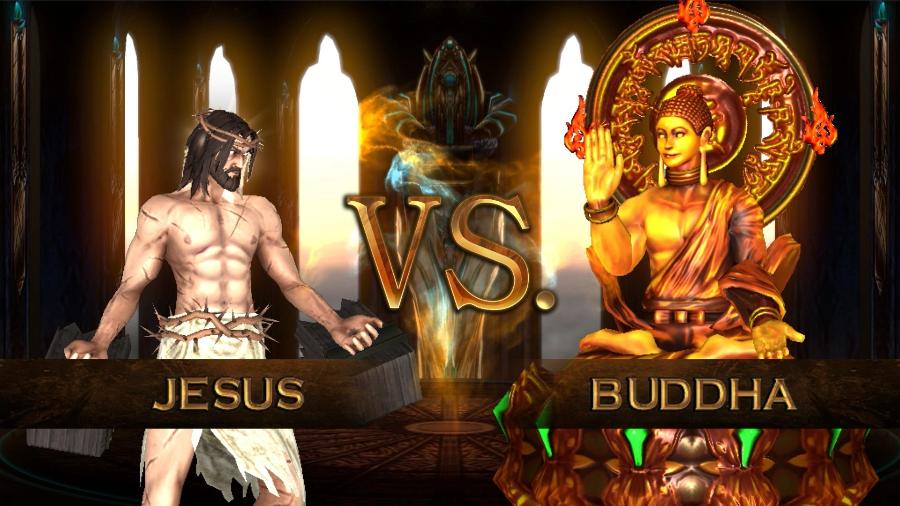 It’s worth noting that users can still boot games in their Steam Library, but the store itself remains broken, so people can’t spend any money without getting into some sort of DNS or something. The Lowyat stories note exactly how you can do this if you happen to be a Malaysian user, by the way.

The error message users currently see warns “This website is not available in Mayalsia as it violate(s) the National law(s),” in both English and Malay. This sort of thing has happened before, of course. Years ago Injustice: Gods Among Us had to be renamed Injustice: The Mighty Among Us in the Middle East – this stuff happens more often than you’d think. Hopefully it’s resolved soon, and without full-on censorship – though that doesn’t seem particularly likely now.

Update: Fight of Gods publisher PQube has provided a statement on the matter:

“Fight of Gods is a video game that takes a humorous approach to religion in the same way that other entertainment formats have – across television, film, books and theatre.

The game is not promoting any religious agenda and is not designed to offend. The description of the game on the digital platforms through which it is distributed provide clear guidance on the nature of the game and its content so that people can freely choose whether or not to play it. We fully respect the choice of those who would not wish to play it.

We are disappointed that such freedom of choice is not given to everyone and in particular that the game has been forcibly removed from sale in Malaysia, although no direct communication has been received by us as to the reasons for this. Nevertheless we respect any rules and censorship imposed in any given territory.

We have reached out to Steam and are working with them to resolve the situation as soon as possible.”

Zed further stated creating a game such as this for “mercantile greed” was very “disrespectful, highly inappropriate, insensitive and could be disturbing for some faithful.”

“Hindus were for free speech as much as anybody else if not more,” said Zed, “but faith was something sacred and attempts at belittling it hurt the devotees. Video game makers should be more sensitive while handling faith related subjects, as these games left lasting impact on the minds of highly impressionable children, teens and other young people.”

He added peace was at the core of major religions, but instead, Fight of Gods promotes violence.

“Highly revered religious figures are not meant to be reduced to just a character in a video game to be used in combat in a virtual battleground,” he stated.

Fight of Gods was developed by Digital Crafter, and published by UK-based PQube.