Overwatch’s newest hero has finally punched his way onto the PTR.


At the start of the year I wrote about the slow pace of delivery for new Overwatch heroes. Six months on, I’ve not only detailed the arrival of Orisa, but now find myself excited to play Doomfist.

Having been teased for months and with players witnessing the impact of his gauntlet against the OR15 robots in Mumbani, it was only a matter of time until Blizzard finally released the long awaited hero. Is he worth the wait, and will he shake up the existing roster?

Whenever I play a new Overwatch hero I approach it with two questions in mind:

As the eighth “offensive” hero, Doomfist has a surprising kit. I anticipated that he’d be entirely melee, but it transpires he utilises a combination of ranged attacks (Hand Cannon) alongside a variety of close-quarter abilities. This hybrid playstyle not only allows him to have a great deal of flexibility, but also ensures his viability across a variety of maps. Where Pharah excels in large expansive spaces, or McCree in relatively close quarter skirmishes, Doomfist straddles both of these scenarios. 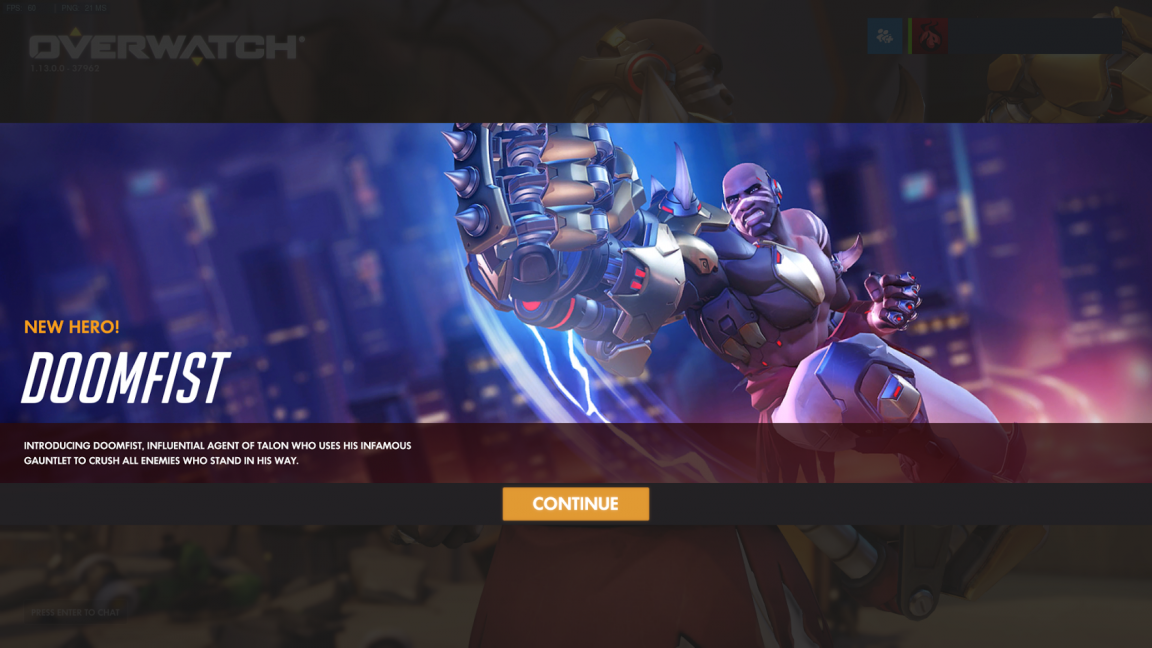 I make no suggestion that his Hand Cannon offers the sort of ranged poke that can compete with such range-focused heroes, but it does afford him the opportunity to attack without having to always rush into melee. What I particularly like about this design is the fact it emphasises the need for positioning and buying your time for the right moment. Dive too deep with a fully charged Rocket Punch and you can be melted in seconds, but if you choose an opportune moment to make use of its increased scenery damage – before utilising Rising Uppercut and Seismic Slam to escape – it’s a level of speed and burst few can survive.

What’s relatively evident from the Public Test Realm as players scramble to play Doomfist, is that many are dying quickly as a result of going gung-ho, on the assumption that his passive ability, The Best Defense, will somehow provide enough shielding to sustain him. While there’s no doubting the shielding it offers is moderate – certainly if you can land all three of your melee attacks – it’s a level of mitigation that’s easily cut through under ranged pressure. Only on successfully landing his Meteor Strike (which sees his shielding more than doubled when used against heroes) does he receive eye-watering returns.

I’ll freely admit that I’ve found Doomfist challenging to play and in part I suspect that’s because of his hybrid style. He can struggle to go toe-to-toe with heroes such as Reaper, Tracer or McCree, because he not only needs pin-point accuracy on Rocket Punch, but also because of his inability to manually reload his Hand Cannon. With only four shots he cannot afford to miss, and despite a fairly tight spread on the pellets, it’s easy to see some of them fail to hit unless you’re immediately next to them.

“Many players are dying quickly as a result of going gung-ho, on the assumption that Doomfist’s passive ability will somehow provide enough shielding to sustain him.”

Doomfists reliance on Rising Uppercut in order to incapacitate, before following up with Rocket Punch, is incredibly punishing if you don’t make initial contact. Not only does it leave you immediately vulnerable, but you’re then left with the choice of running away or attempting to make something of your botched initiation. I’ve died countless times to such failures, and it’s this level of mechanical accuracy that will separate the good Doomfists from the bad.

I do have some concerns with Doomfist (despite my love of his kit) and even though they’re small niggles, I think unless they’re ironed out, he’ll struggle to find a foothold. His inability to reload his Hand Cannon (as noted above), severely limits his opportunities to trade against other heroes. If you find yourself with only two rounds left in your fist, this can spell disaster when you encounter an opponent who’s fully stocked. Having to wait for your ammunition to recharge does ensure he doesn’t descend into a purely ranged hero, but it also feels contrived.

Blizzard don’t want him to just sit back and poke repeatedly and likely want you to use your Handcannon more as a shotgun after juggling opponents in melee, but that doesn’t make it any less frustrating. I’ve lost several duals as Doomfist that could have been easily won, were I to have control over when I reload (rather than being forced to wait).

My second issue with his kit is that Seismic Slam desperately needs tightening up. It’s designed to be used while in the air, but having Doomfist hang for a brief moment after Rising Uppercut feels sluggish and leaves him vulnerable. Not only this, but when you do land your uppercut, following up with Seismic Slam is bloody hard. In fact, I’m not entirely convinced it’s even a viable rotation; the knockup sends enemies into the air, while Seismic Slam throws Doomfist too far. It feels like the trajectory on his leap needs adjusting so that both skills can be used in conjunction with one another. Even changing Seismic Slam’s telegraph so that it’s around Doomfist, as opposed to a trapezium in front of him, would help a great deal. As it stands, using Rising Uppercut followed by Rocket Punch and several rounds from your Hand Cannon is your best bet for reliable burst. 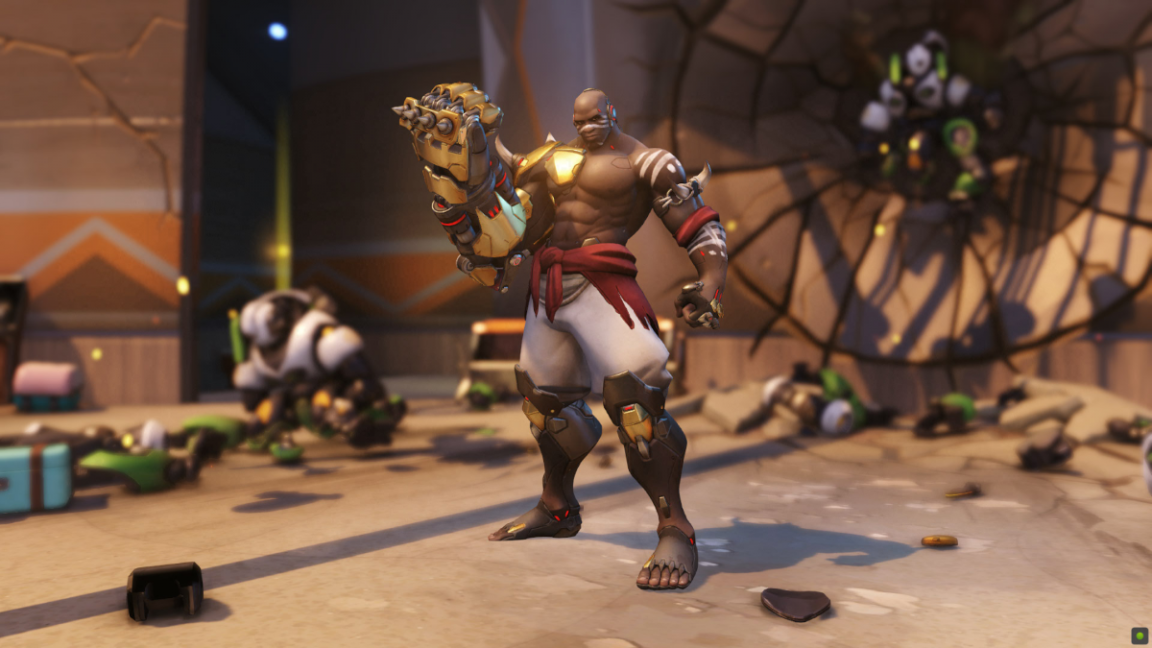 For a hero that’s designed to combo opponents, this lack of synergy seems a strange oversight on Blizzard’s part as I’ve yet to find an effective and reliable use for Seismic Slam (unless dropping from a building into a group of unaware players). In its current form the one redeeming feature for it, is that it grants Doomfist with access to some amazing mobility. All three of his abilities when used together can see him quickly escape or reach areas of a map other heroes can’t. This makes him particularly good at evading opponents and excellent at flanking, allowing him to quickly unleash a surprise attack on some of the more immobile heroes (he destroys Orisa).

At this stage it’s difficult to know how Doomfist will fit into the competitive scene because he falls somewhere between the existing roster, but excels nowhere. His burst is harder to land than other heroes, while his ranged capabilities are limited. One on one he’s only great when he catches an opponent unaware, but in team fights he can struggle to find a way in without suffering early damage as he’s incredibly vulnerable to ranged attacks. In a coordinated team however, in the right hands, I think there’s every chance that he could excel, especially when used by someone who enjoys greater hero depth than we’ve grown accustomed to.