It’s time for some alien sudoku, some fighting, and a bad-ass Krogan. Are you looking for Drack? You’ve found him. 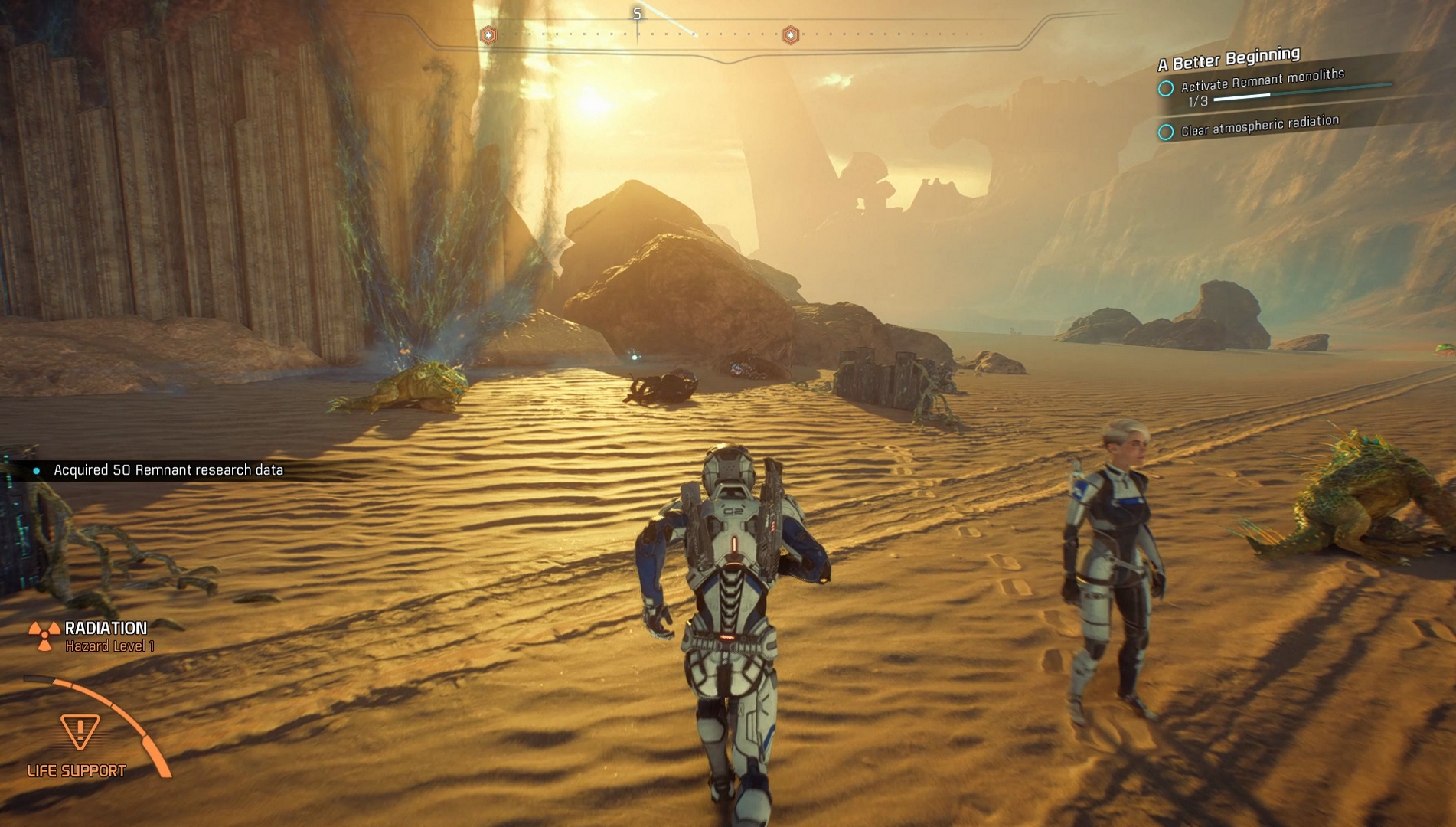 After landing on Eos, meeting Peebee and activating a monolith, Ryder’s goal is clear: activate the remaining monoliths and crack the Remnant vault.

It’s tempting to take advantage of Mass Effect Andromeda’s non-linearity to wander off in pursuit of side quests and map icons, but don’t do it yet. Much of Eos’s content is gated off by a nasty environmental hazard, and if we just crack on with the main quest for a while, we can come back and explore without the frustrating radiation damage.

If you look at your map you’ll have waypoints to guide you to the next monolith, which is handy, but it’s worth noting that each of the monoliths also fires a bright white laser across the sky of the planet. These lasers converge on one point that seems to lead to a whole lot of nothing right now, but you can trace the lasers back to the monoliths you need to find if you want to track them down in a more organic way.

We’re going to focus on the main quest here, and while in the last part of this guide we did tell you to mostly stay in the Nomad and make your way very specifically from story point to story point it might be worth hopping out if you pass anything of interest along the way – you might find some Remnant robots to fight, or some Kett, and many of these places also hold containers that have loot for you to grab. Unfortunately you’ll also find yourself butting up against the radiation a lot; don’t worry about it, it goes away later. Don’t bother trying to push through it.

When you reach the next monolith you’ll have to fight to clear it of enemies – easy enough, just remember to take cover as needed and don’t forget to spend your skill points from levelling up to enhance your powers. When you’re done, you’ll be faced with a console and another little puzzle. 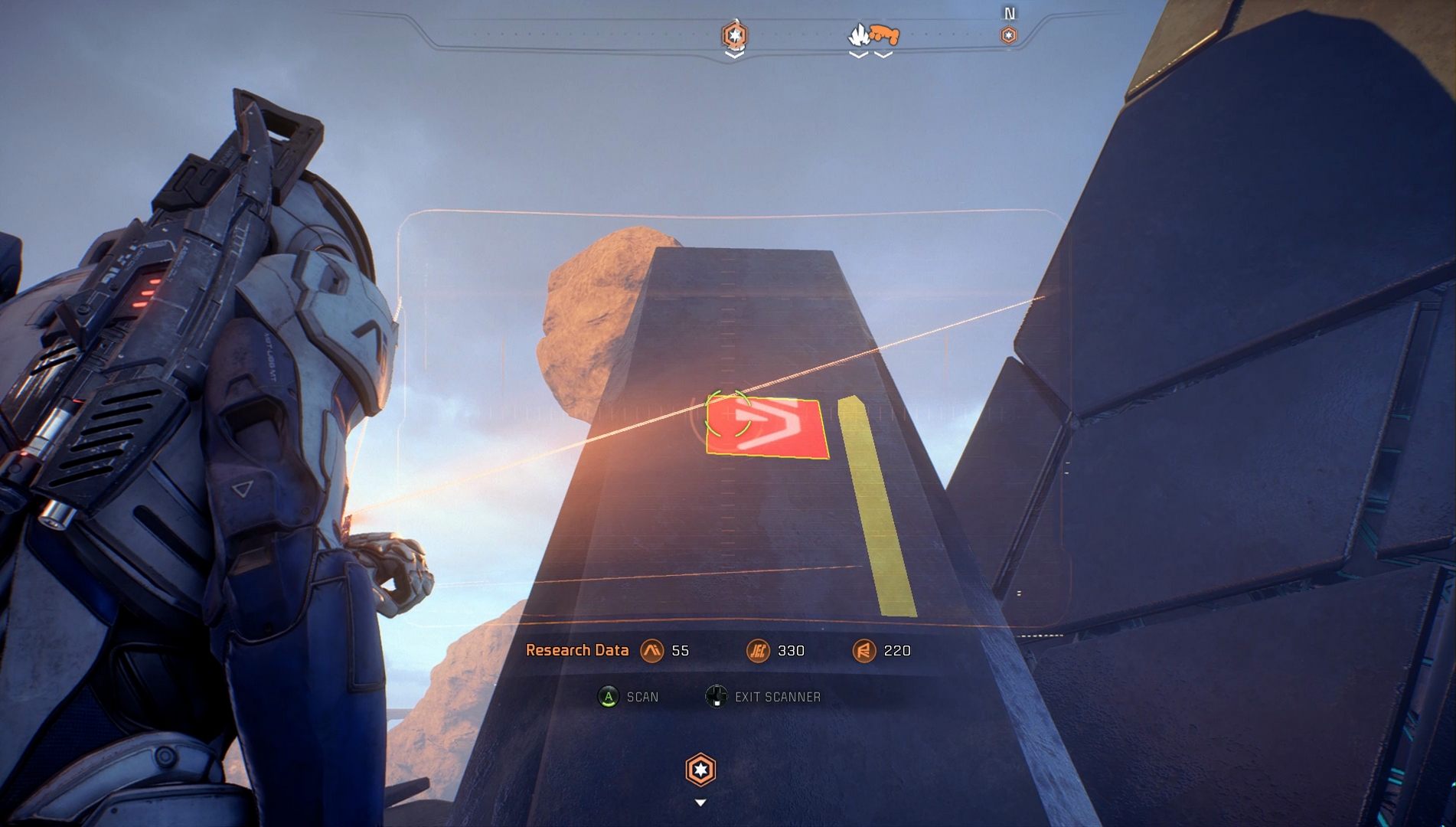 Reactivating the second Remnant Monolith and solving its glyph puzzle

The first thing you’ll need to do is attempt to decrypt the Remnant Monolith sitting in the middle of this area. When you do it’ll toss up a puzzle screen: it’s immediately clear that this one isn’t as simple as waving a hand and activating it as with the last. You can’t complete the puzzle, however, since you’re missing some of the glyphs.

To get the glyph, pop open your scanner and look at the console. Follow the cabling that comes out of the console underground and watch where it goes: you’ll see it goes up high, but in the same direction as the cable you’ll see another console. Interact with this – platforms will rise, allowing you to use your jump-jets to boost your way up to where the cable leads.

Once you’re high up, activate your scanner again and look around – just as at the last remnant site you’ll find a glyph. From this vantage point you’ll be able to see a second glyph too, so scan them both. Now we’re talking!

Jump down and hit the main console again. The puzzle flashes up: and this time it’s doable! We’ve got a dedicated page that explains to you just how this monolith decryption mini-game works, so if it confuses you and you want to do it legitimately head on over there and read those tips. Basically it’s sudoku, though: each grid and line can’t contain the same icon more than once.

If you want to cheat, well, here’s the answer: 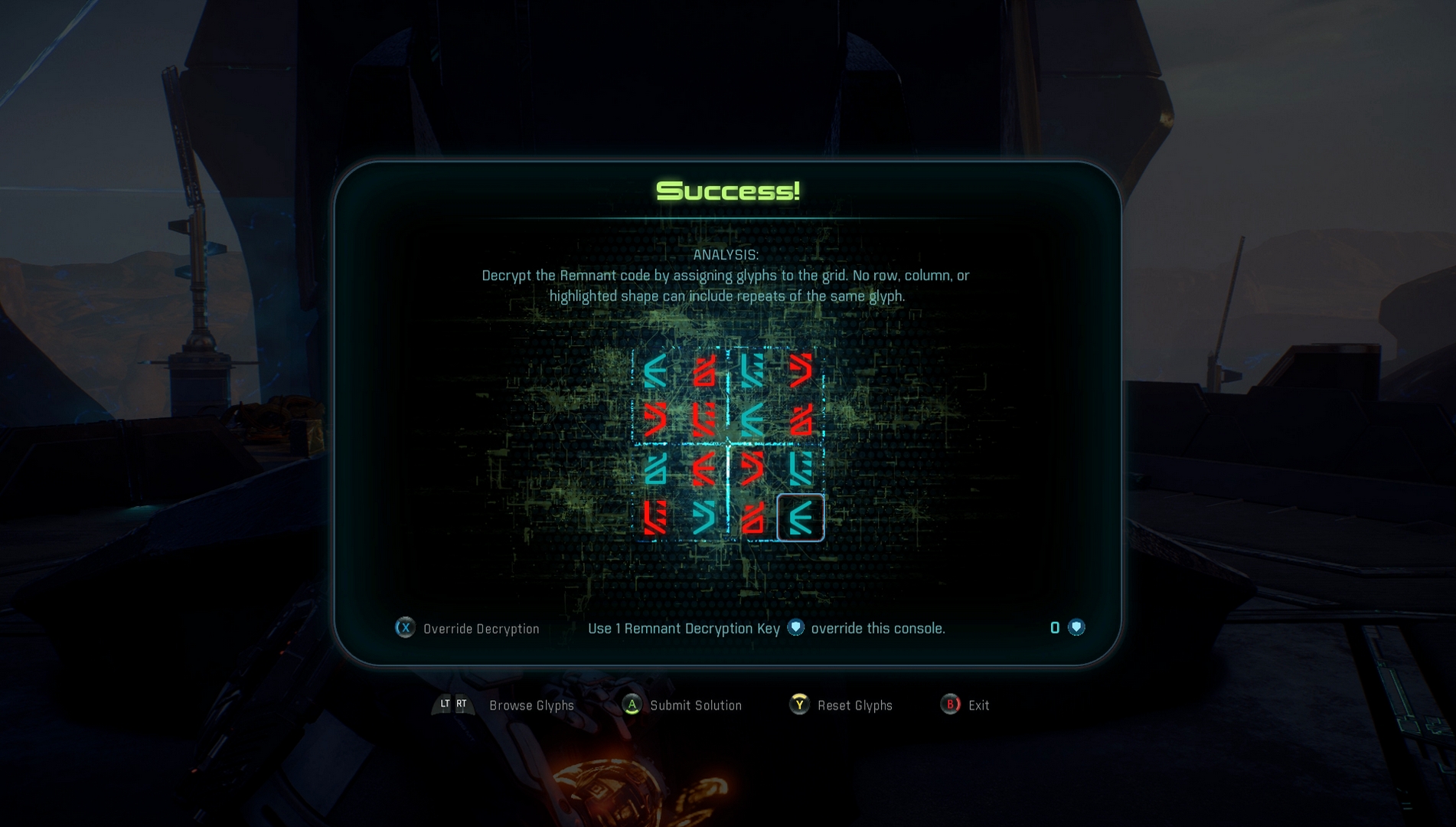 After you activate the monolith some concerned Kett soldiers will show up – take care of them. 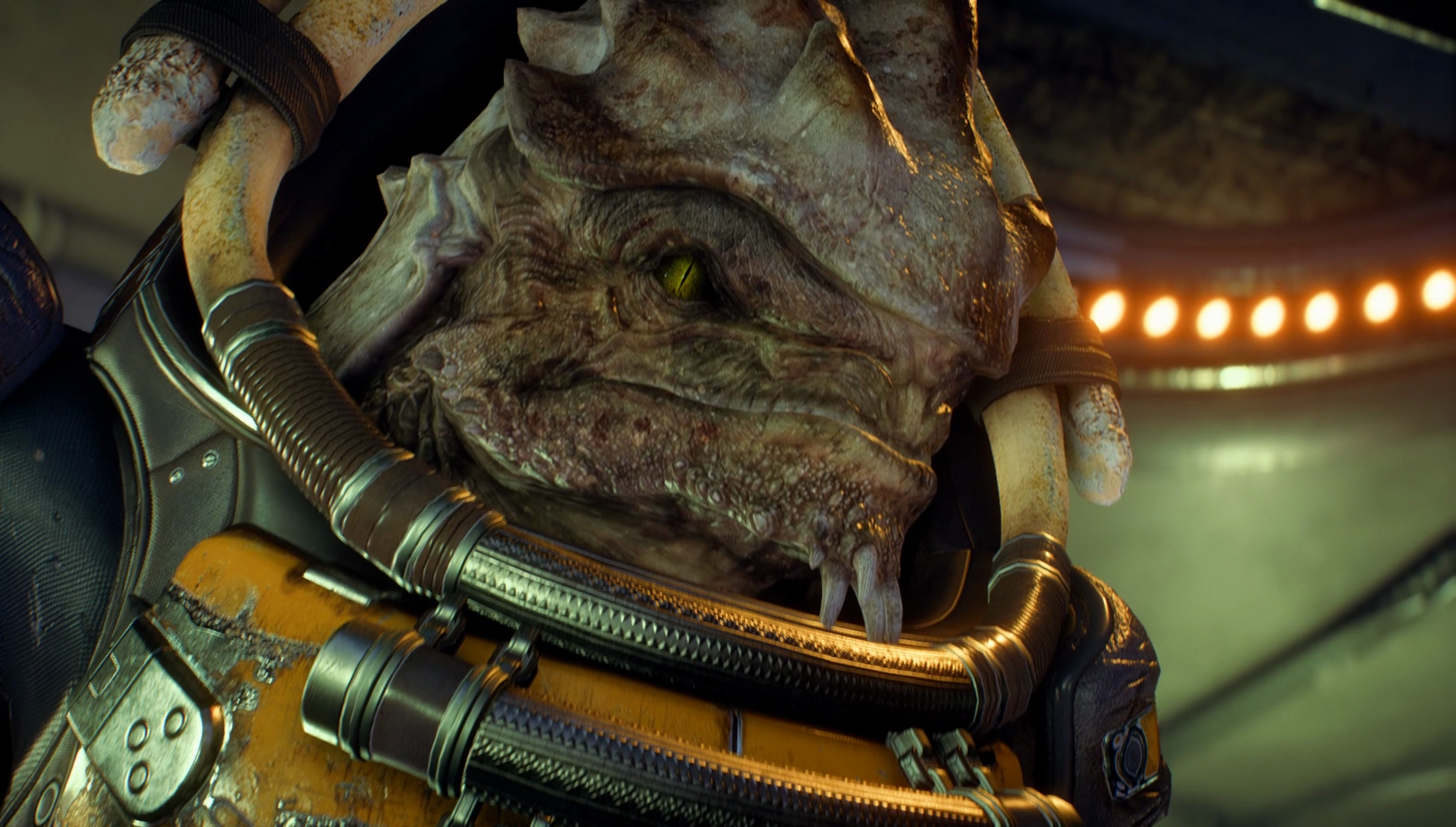 A Better Beginning: The final Monolith & the Kett Base

Once the second monolith is activated our job is to head to the third, obviously. This one is a little bit more complicated still – it’s surrounded by a force field that you can’t penetrate and is surrounded by a Kett base. You’ll need to storm this base and kill the Kett inside in order to deactivate the force fields and reach the monolith. Head south-east following your waypoint to reach the base.

The base is symmetrical, with one entrance that splits into left and right pathways that are more or less identical. Park up the Nomad and begin your siege. This is your first major combat challenge, so use cover properly, don’t forget to keep moving using your jump jets and don’t rush – be patient and take out the Kett in small waves rather than by rushing too deep into the base.

Don’t forget to scan absolutely everything new that you can for research points. Sometimes you’ll find interactive object – power generators scattered along the pathways will deactivate cover that enemies use, making them more vulnerable.

Once all the Kett are dead you’ll need to scan for one last power generator – it’s at the far end of the base, right near the force-field that prevents you from getting inside. Deactivate it and you’ll be treated to a cutscene and meet a new character. That old grandpa is cool.

Next: Part 6: Into the Vault, clearing the Eos radiation and founding Prodromos

With this done, head to the final monolith. The score is the same here as before: whip out your scanner, scan the console, then follow the cables to find the two glyphs. They’re both on the roof of nearby pillars. Once scanned you can interact with the main console.

This time there’s no puzzle – you’ll mercifully just be given immediate access to the monolith and activate it. Once this monolith is active, major changes are afoot here on Eos. It’s time to check out whatever it is the monolith activated. Prepare yourself… we’re heading for our first vault.