Little Nightmares isn’t going to keep you awake, but it certainly has its moments. 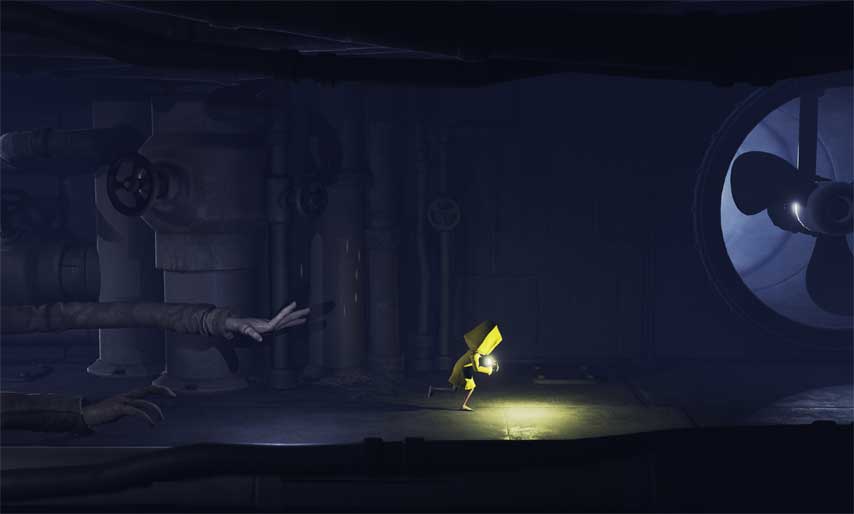 Little Nightmares is a puzzle-platformer best likened to Limbo and Inside, in that you run left to right, solving puzzles and platforming, while occasionally suffering anxiety in the face of escalating tension and expecting at any moment to suffer a gruesome death.

Little Nightmares offers some absolutely sublime moments of dread and intrigue, but just can’t sustain that momentum. It isn’t all it could have been with a more cohesive vision.

Compare and contrast with, say, Unravel – a colourful game with a theme of connection and memory. It may have fail states, and you may even become frustrated if you get stuck, but you never feel a hollow, sinking feeling at having to face a challenging segment again, or wince and turn your face away, exclaiming in horror, when Yarny misses a jump. Little Nightmares and its ilk pours that on liberally; this isn’t about relaxation.

Little Nightmares will always suffer for comparison to Inside, one of the most perfect video games ever made, but whereas Inside features somewhat unexpected moments of horror (those underwater segments!), Little Nightmares has been presented specifically as a game about scary things. It’s in the title, for one thing, and the press kit I got in the mail mentions a hope that playing will cause me to relive my childhood fears. 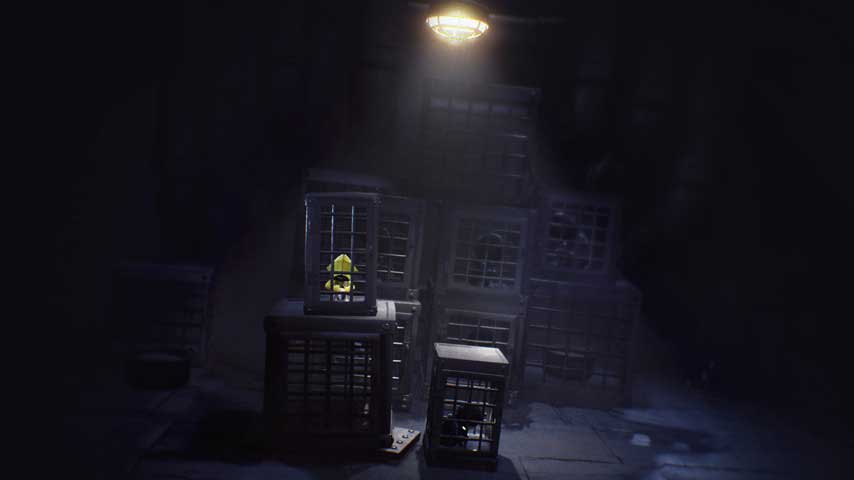 This is not a fair representation because Little Nightmares isn’t really concerned with childhood fears at all. There is some suggestion that what protagonist Six is experiencing is a dream, in that failures result in her startling awake, shaking her head as if to clear a nightmare, before doing it over and over again – just like a bad night. The setting and its inhabitants have a surreal quality, too – most immediately noticeable as mismatched scale.

But Little Nightmares has a different story to tell, and the central theme is not fear but hunger. (This is not subtly conveyed, and the painfully lazy and ignorant conflation of greed with obesity really undercuts any commentary the developers might have been trying to make about socioeconomics.) But even this central theme gets lost sometimes, because there are too many disparate ideas packed into a relatively short game. The resulting mess is either a clever, intentional reflection of the sweaty confusion of night terrors, or the consequence of not really having a strong narrative thesis to start with. In game development, you’re generally safe to bet on the latter. 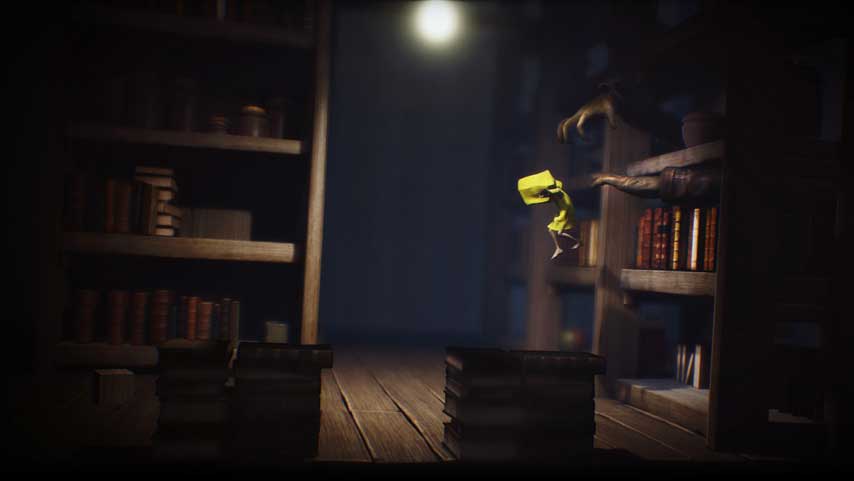 Despite the not-quite-successful storytelling, and despite the misrepresentation of its themes, Little Nightmares did manage to frighten me quite badly. The early segments of the game are very well paced for rising tension, and Tarsier’s masterfully light hand with tutorial prompts and growing complexity of level design mean you frequently feel just like Six: stumbling in the dark, searching frantically for a solution, weak and vulnerable – even when you overcome challenges on your first try. The wonderful lighting and free use of Six’s lighter show up a remarkably rare willingness to plunge you into actual darkness (as well as the lovely, really physical graphical style; that flame reflecting off the different surfaces is enchanting) and the tiny circle of warmth it produces feels both comforting and dangerous in that it distracts you from the shadows, where the threats are.

The second level, called The Lair, is the peak. Having progressed out of the inmate areas, Six moves through living areas occupied by The Maw’s janitor – a shuffling, sniffling, long-armed creature whose sharp hearing and groping reach make up for his inexplicable blindfold.

Throughout this area Six must avoid detection and capture using stealth, speed and puzzle solving, often with few cues and very narrow margins for error. You may only have moments to figure out and execute a plan, and inaction is often as deadly as action; stepping from the carpet onto the creaking floorboards will alert the janitor to your presence, but if you stay in one place he’ll simply reach over and discover you.

The gameplay is high risk, and with clever rationing of the janitor’s onscreen time and some brilliant audio, Tarsier ratchets the tension right up. I had to put down the controller and take a break; I couldn’t stand the shock of being captured, of hearing Six’s bones crunch in his hands and her little gasp of shock. I couldn’t stand the huffing and panting of his breath or the intent groping of those long arms that seemed to go everywhere. 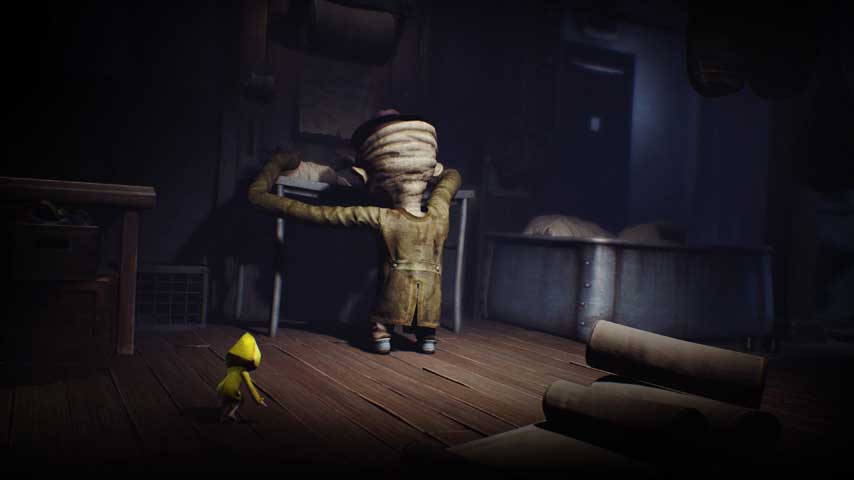 There were segments in this level where I died a lot (mostly due to overlooking scenery clues), but the worst bit was one I passed with no mechanical challenge at all. Having escaped the janitor by sprinting away, I fled into a lift only to realise it was a dead end. Frantically searching for an escape, I spotted a box and crawled inside to hide. Heart pounding, I listened to the creature’s approach, held my breath as first his hands and then his entire body entered the lift, and didn’t dare exhale even as he turned away and activated the controls. After the doors opened and he wandered out, I spent several seconds still rigid with terror before cautiously, cautiously, peeping out to see if he was really gone.

Your mileage may vary here; I think there are certain life experiences that key you in to this kind of horror. Those who have an elemental weakness will recognise the pieces of their terror: the heavy breathing and the sniffing. The physical presence that fills the space end to end, leaving you nowhere to hide. Listening at doors to see if it has gone. Turning your face away from the smell of its breath. 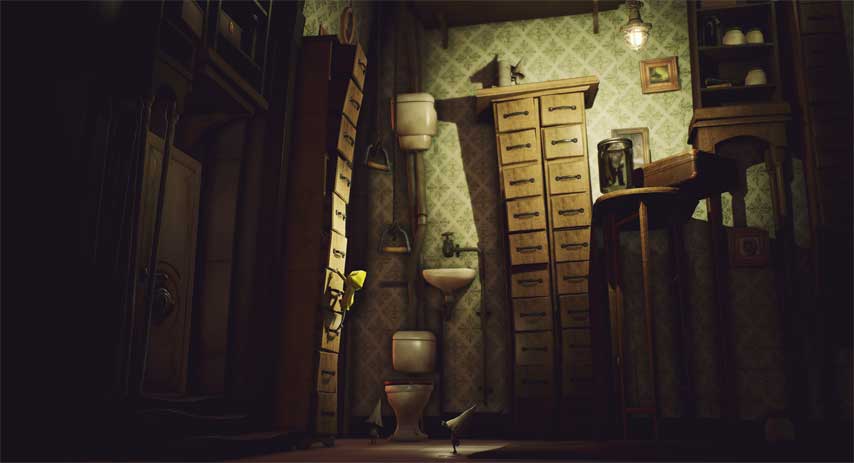 As Six climbs through The Maw and closer to the outside world, there’s more light and less weirdness; the tension decreases palpably. The next level of Little Nightmares is set in a rather jolly kitchen and although the chefs here will absolutely chase you down and presumably chop you up for pie, none of the set pieces are anywhere near as tense and challenging as the best of those in the level before; I actually laughed at the chefs and their impotent fury by the end. The one after that is even less frightening.

As Six climbs through The Maw and closer to the outside world, there’s more light and less weirdness; the tension decreases palpably.

Eventually I stopped playing. Little Nightmares does not have the forgiving platforming I enjoyed so much in Inside, the checkpointing is a bit iffy, and it’s properly 3D despite being a sidescroller, so it’s easy to get stuck and frustrated. I watched the final 30 minutes on YouTube rather than fluff a jump I’d spent almost as much time on as the entire rest of the game, but even allowing for how different it feels to play rather than watch a horror game, it really doesn’t seem like anything matches The Lair for creeping dread.

While this might be a deliberate design decision to break Little Nightmares up and provide texture, it again feels more like a bunch of different kinds of ideas chucked together and roughly shaded the same colour, and doesn’t marry well with what we were told about the game pre-release. There’s a pretty good puzzle platformer in here (annoying difficulty spikes aside), but thematically and narratively it doesn’t hang together as well as it should – especially in a game that’s only a few hours long unless you want to go back and hunt out all the collectibles. 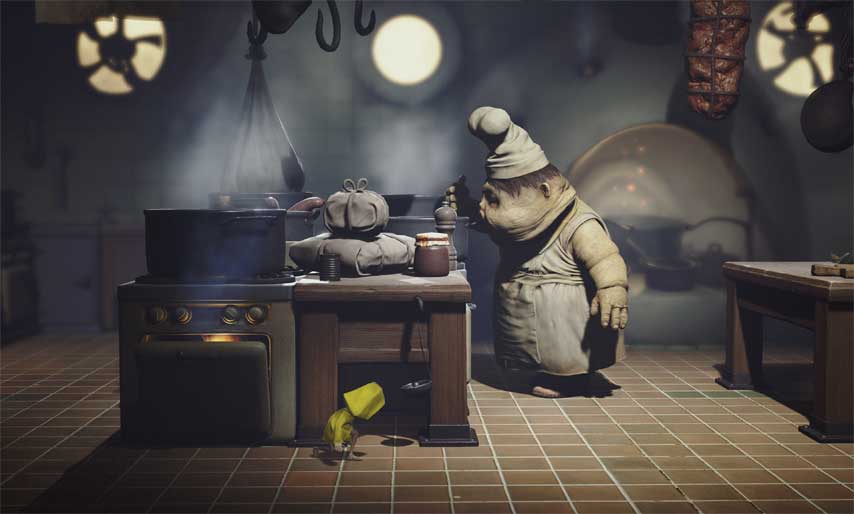 Little Nightmares is short, but its brevity is reflected in its lower price tag. It wasn’t what I expected it to be, which is always a bit disappointing, but perhaps says more about my relationship to video game marketing than the product itself.

More damningly, Little Nightmares offers some absolutely sublime moments of dread and intrigue, but just can’t sustain that momentum. It isn’t all it could have been with a more cohesive vision to wrap around its level design. It falls short of being a truly stand-out experience as a result of that, which is a shame. Still, worth a look.