Prey isn’t as weird as those early trailers suggested, but it is extremely cool. 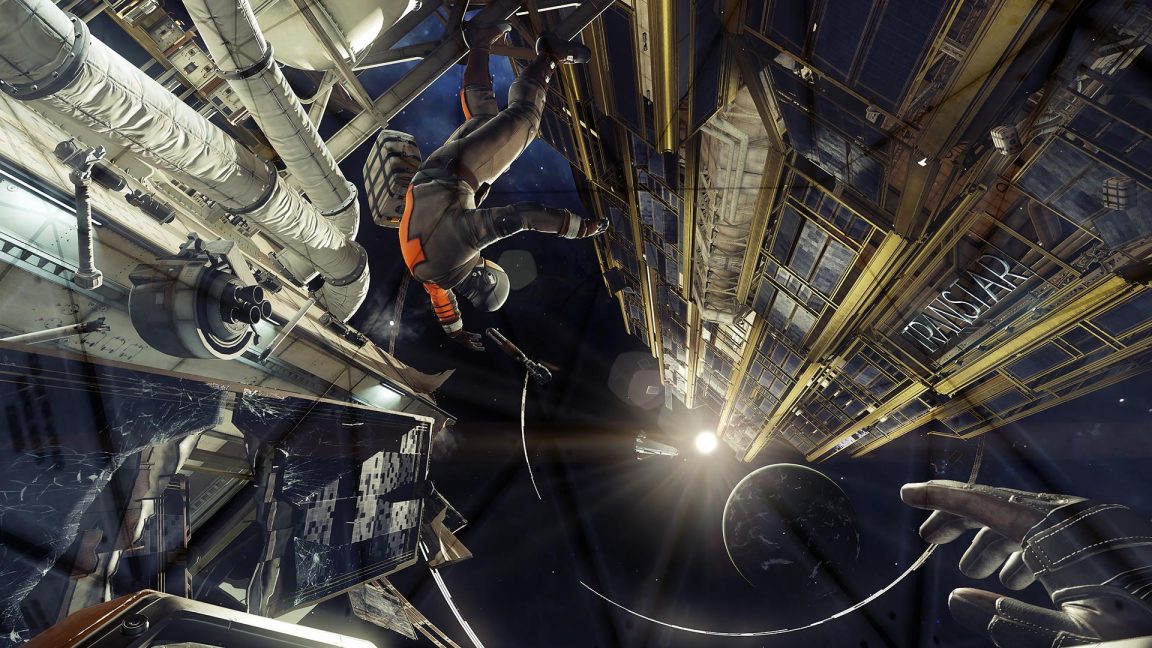 “In its opening minutes, Prey looks and feels very much like the modern Deus Ex series, with a similar sort of streamlined cyberpunk aesthetic.”

Prey is not as weird as I’d hoped based on its E3 2016 reveal trailer, but after playing through the first hour or so, I’m gagging to see more.

A lot of talk about Prey is going to focus on its lineage; it comes to us from the same sprawling family as Thief, Deus Ex, System Shock, BioShock and Deus Ex. Arkane is home to some of the people who worked on those games, and if you had any doubts about its affection for and connection to the grandaddy of the immersive sim genre after Arx Fatalis, Dark Messiah of Might and Magic and Dishonored, the in-game Looking Glass technology ought to tip you off.

The more surface phenotypical features of this DNA are all there. For example, you can pick stuff up and throw it around if you want to, flush all the toilets you fancy, and even leave little damage decals on monitors if you press the attack key rather than the interact one when trying to check your email.

The demo is too limited to judge whether the systemic and emergent goodies of this family come through intact, but there are clues. The Gloo gun hints at an interesting combat sandbox which also doubles as environmental and traversal puzzle toolkit, and my discovery of a Nerf crossbow – useless in terms of damage, but a silent method of acting on interactive objects at a distance – suggests there’ll be opportunities for interesting stealth gameplay, too.

The opening sequence is a soft tutorial and largely linear, branching just once very slightly as you choose how to bypass a closed door, where a popup message informs you that later in the game you’ll encounter obstacles with multiple possible solutions and can choose your own path. This explicit promise of the old Looking Glass approach is more subtly echoed in the branching of the skill trees as well as the the many terminals, puzzles and routes Morgan cannot investigate in the opening sequence but must return to later in the game.

These familiar elements will almost certainly please genre fans, but flushing toilets, a crowded combat sandbox and freedom of playstyle are not enough to shift units. In its opening minutes, Prey looks and feels very much like the modern Deus Ex series, with a similar sort of streamlined cyberpunk aesthetic – although it’s tempered by Arkane’s distinctive character design. I couldn’t help but suppress a sigh as I realised the environments were full of heavy objects I’d be able to move once I bought a leg augmentation – sorry, spent Neuromods in the appropriate tree. Your mileage will vary on that, but as Deus Ex: Mankind Divided so recently demonstrated, mass appetite for that kind of experience has diminished.

Prey gets more interesting when Morgan moves into the main environment – the Transtar space station is clearly part of the same universe but lacks the pretty, frictionless future-urban look of Morgan’s apartment. The decor here instead favours corpses, combat damage and warren-like layouts that loop and interconnect, each packed with props, resources, story hooks and alien ambushes.

The first main objective is to reach the hub at the centre of the station, almost overwhelmingly riddled with doors over four levels. Most of these were closed off, but it was easy to see that players would be wandering back and forth between locations throughout the game, gradually exploring and unlocking the whole station; the maps found in most areas are going to be a lifesaver. This freedom of moment means there’s no need to hoover up all the crafting materials Morgan finds around the place, which rapidly gum up her inventory, and a Metroidvania-style element means puzzles and secrets will reward those who return to past scenes.

As an example of this last point, there’s a combination safe in one of the earliest rooms Morgan can access. Fresh from Dishonored 2’s safe combinations, I dutifully scoured the room for clues, eventually putting together a grand conspiracy theory about the solution involving emails found on various terminals nearby – and then giving it up in disgust when I couldn’t make the numbers work out for me. Later I asked a PR rep about it, and she laughed: nobody in the office had been able to solve it, and an email from Arkane confirmed the solution was not available in the demo. Well, then. 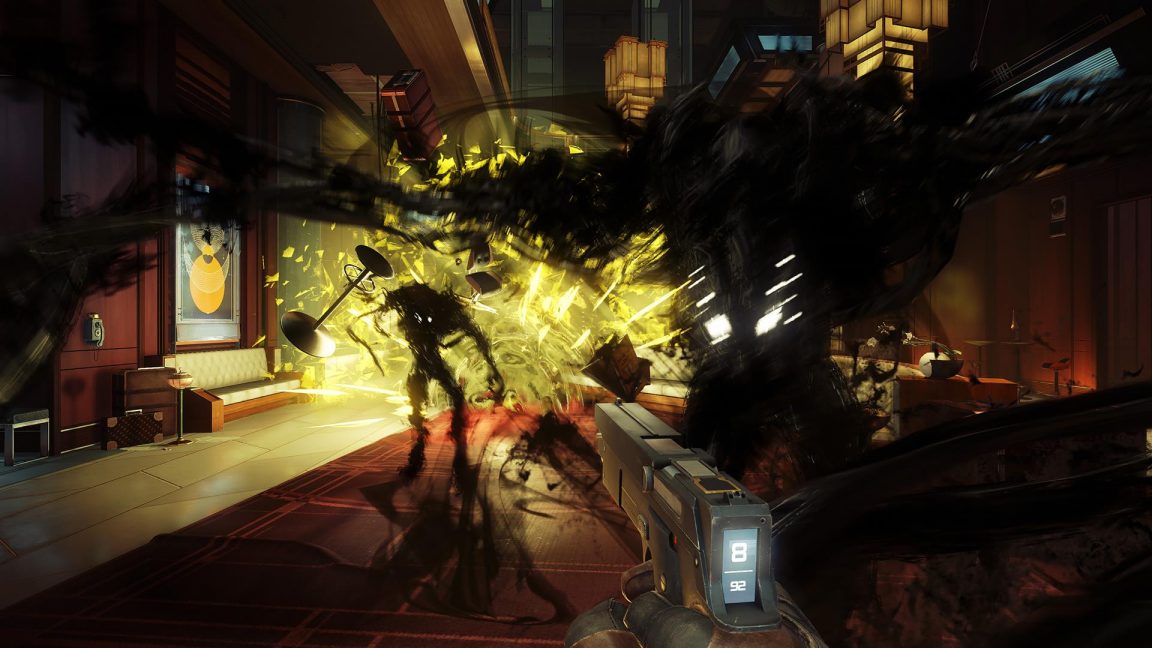 The upshot of everything I’ve said so far is that Prey seems like a decent enough game of the immersive sim lineage, promising a wealth of exploration, combat and throwing-things-at-other-things-to-see-what-happens in the finest traditions of the genre. (In case you were wondering, hitting an explosive gas canister with a wrench results in you being blown up. I checked. If anybody asks, it was on purpose. For science.) Without seeing more of the gameplay, the differentiating feature at this stage has to be the setting and plot.

Without spoiling the story, Prey presents a more straightforward narrative in the first hour than I had expected based on the initial reveal. Looking back on E3 2016, I think I made too much of director Raphael Colantonio’s promise of an immersive sim with a “psychological twist”. I should have paid more attention to the fact that the “secrets” hidden in the reveal trailer were pretty obvious, and to Bethesda’s more matter-of-fact description of Prey as a game about being “the first human enhanced with alien powers aboard a desolate space station under assault”.

There is a nice twist right there in that first hour, but it was resolved by the end of the demo; I was disappointed by how every question I had was answered almost immediately. By the time I was finished I felt like I knew exactly what had happened on the station, identified an antagonist, and had an overall purpose. All very admirable in terms of video game storytelling goals, and even from the start it feels more cohesive than Dishonored (which for all its truly glorious lore does feel like a story stitched together from excellent level design). But not necessarily super compelling stuff to anybody versed in literate sci-fi, even with all the aliens and eyeball stabbing.

This is often the case in the first hour of a game, and the fact that Prey didn’t leave me with a boatload of questions does not mean things won’t get super weird later on. I can’t help comparing it to BioShock Infinite, though; I remember spotting the glitching Lutece statue in those opening few minutes and feeling a building sense of excitement that here was something I didn’t understand at all. I hope Prey can offer that same sense of mystery for all of us, and to satisfy my personal tastes I hope it goes off the rails so hard it ends up upside down, in another country and on fire. 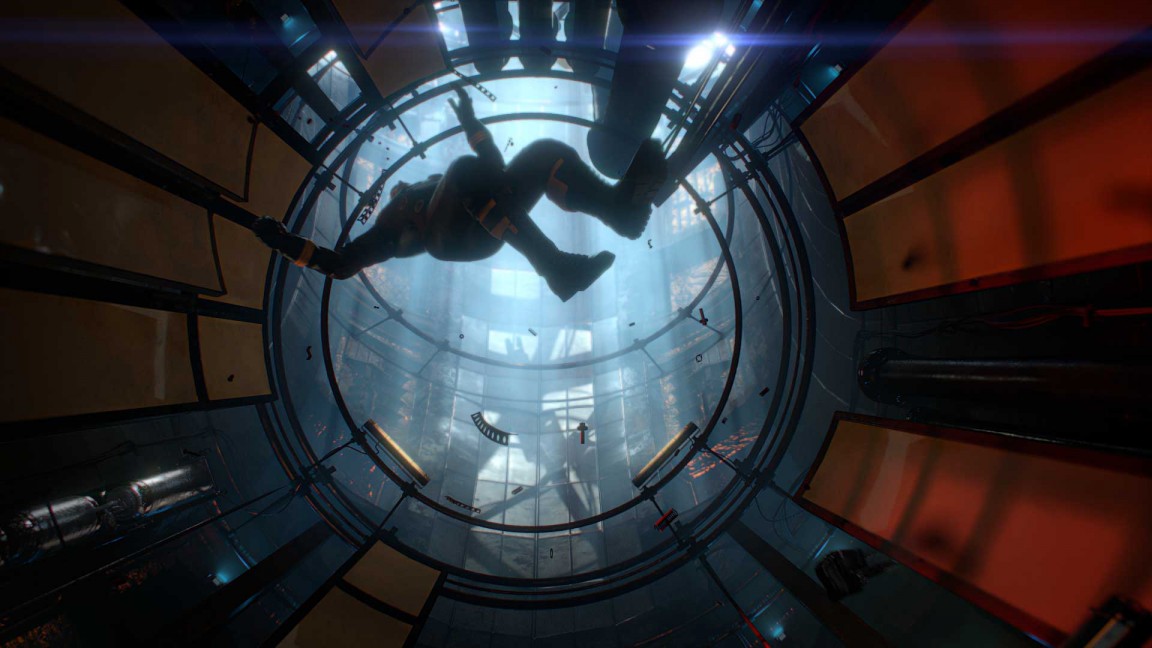 “Prey seems like a decent enough game of the immersive sim lineage, promising a wealth of exploration, combat and throwing-things-at-other-things-to-see-what-happens in the finest traditions of the genre.”

Straight forward narrative and familiar immersive sim gameplay: a solid package but not mind-blowing. So what I’m having trouble working out is why Prey has been nagging at my mind for the past week, while its close cousin Deus Ex: Mankind Divided has been gathering dust since about 20 minutes after release.

Partly I think it’s a product of the nature of the demo; we got a tantalising glimpse of the game’s possibilities without the opportunity to get to grips with them. The enemies through the demo were all the same type of grunt, for example, with another, more interesting type shown only very briefly and never engaged. The crafting and upgrade systems were available, but without enough resources on hand to put them to significant use. The story stood up and shook itself, and although the hairs settled back down straight away, there’s the chance it could do it again – or perhaps stand up and savage the cat.

I guess I want to play more Prey to find out if all these things, combined with the obviously solid bones it is built on, turn out to be as much fun as they could be. That’s a stickier start than most games manage.